Dry and calm across many areas today with spells of hazy sunshine. Low cloud, rain and drizzle will however arrive into the west and northwest this afternoon, extending countrywide later this evening with some heavier bursts then. Highest temperatures of just 3 to 8 degrees Celsius, coldest across Ulster and Leinster.

Wet and misty for a time early tonight with possible spot flooding. Whilst the rain will clear southeastwards, mist and patchy drizzle will linger in the east and southeast. Moderate to fresh southwesterly winds will veer northwesterly, and ease later. Lowest temperatures of 3 to 8 degrees Celsius, coldest away from Atlantic counties.

Most areas beginning dry on Friday with some brighter spells. Overall cloudy though with some scattered outbreaks of rain moving up across the southern half of the country. Highest temperatures of 6 to 9 degrees Celsius, in mostly light variable breezes. Later in the day, some showers will arrive into Atlantic counties with freshening winds. 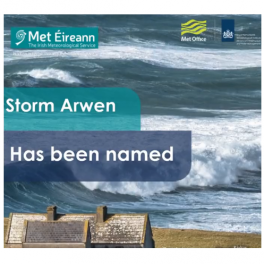 After a rather mild November so far, temperatures ... léigh níos mó