Potato blight is a plant-disease caused by a fungal-like organism called Phytophthora infestans. It is arguably the most important disease which affects the potato, in terms of the economic losses and environmental impact of disease management in Ireland. Blight is of particularly importance to Ireland, following the decimation of the potato crop in the 1840s which, among other colonial factors, contributed to widespread famine, emigration and death.

The potato blight pathogen spreads rapidly in humid weather in the foliage of potatoes and tomatoes, causing the foliage to decay and the potato/tomato to be infected. Due to the pathogen’s dependence on weather conditions, a number of forecasting methods have been developed to help farmers make decisions and reduce the input of fungicides required to control the disease.

Until recently, blight in Ireland has been forecast using the Irish Rules. This method was developed in the 1950s by Austin Bourke of Met Éireann, and was calibrated based on the sparse meteorological station coverage at the time, and a lower risk perception by growers.

Since then, potato production systems have changed dramatically, as has the understanding of the pathogen’s development and its relationship to meteorological situation. Field studies which investigated the occurrence of blight under different weather conditions found that the Irish Rules were not as accurate as they could be, with the old model being overly conservative, missing the onset of outbreaks and failing to warn of blight outbreaks when they occurred. These failings led to the model being updated to reflect the latest science.

The new method reduces the threshold for relative humidity from 90% to 88% and the initial (sporulation) period from 12 hours to 10 hours, the analysis also showed temperature thresholds for blight epidemics could be changed from 10°C to 12°C. Though risk estimation has increased compared to the previous rules, estimated chemical usage is still lower compared to standard grower’s practice. The new methodology is now referred to as the New Irish Rules.

Field trials by Teagasc have indicated that the New Irish Rules can significantly reduce the total amount of fungicides applied while controlling the disease. 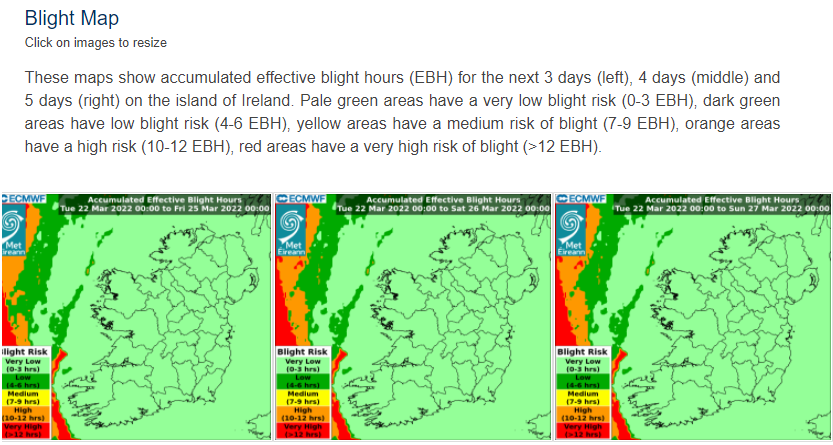 It is envisaged that these maps can be used by growers at large and small scales to ensure they can protect crops as much as possible by spraying at the optimum times, while also reducing unnecessary spraying, saving time and money, and protecting the environment.

In addition to these maps, Met Éireann also provide Blight Meteograms for a number of locations around Ireland. These meteograms illustrate the Relative Humidity, Temperature, Rainfall, and Effective Blight Hours over time, allowing growers to see the development of blight and the point at which blight conditions stop.

Growers can use both the forecast maps and the meteograms to get a full picture of the blight conditions, and should check back daily to get the latest forecast data and see whether there have been any changes in the blight situation. 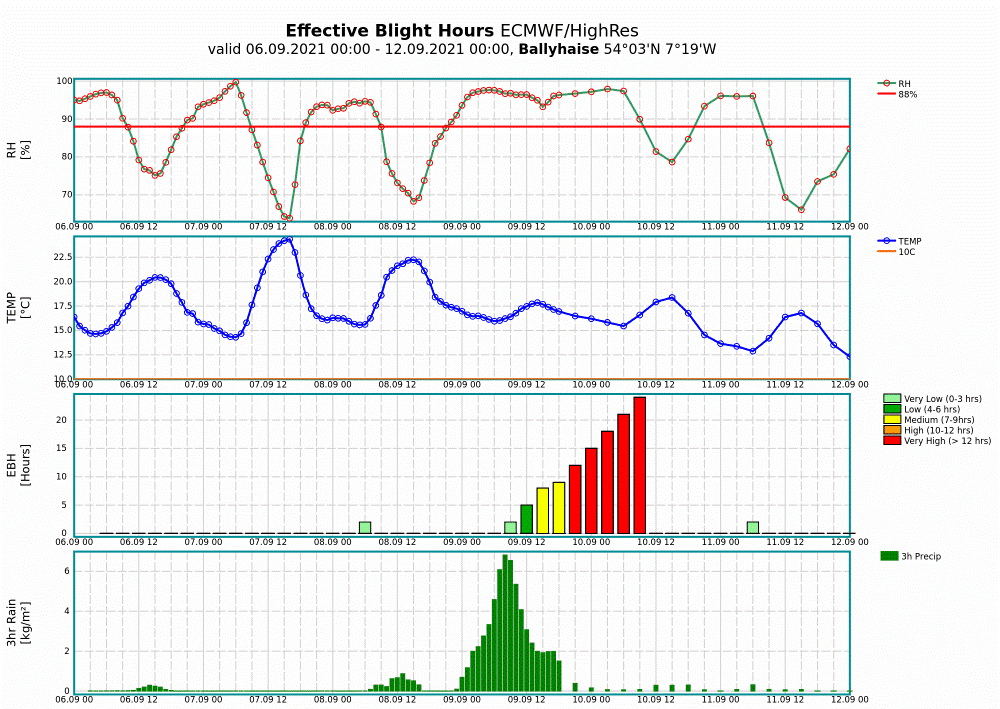 Figure 2: Example of a blight meteogram for Ballyhaise in Co. Cavan, illustrating the warm, humid conditions which cause blight conditions to build up over time. See the meteograms for other locations today on the blight forecast page here: https://www.met.ie/forecasts/blight-forecast

You can view the new blight forecast on our website here.