Met Éireann and climate researchers from the Irish Centre for High-End Computing (National University of Ireland, Galway) to improve the simulation of the North Atlantic climate system and its impact on Ireland.

The latest report from the IPCC (Intergovernmental Panel on Climate Change) emphasised the need “to take immediate and ambitious actions to secure our future”. To support climate action, Met Éireann, with its partners, is developing ‘climate services’ to provision climate information to assist climate-sensitive decision making. In support of these services, the national meteorological service is developing the understanding of Ireland’s future climate and, in particular, its drivers.

One of the key influences on Ireland’s climate is the North Atlantic Ocean-Atmosphere system. The North Atlantic Ocean plays an important role in modulating Earth’s climate by absorbing, releasing, and transporting heat over the planet. These slowly fluctuating sea surface temperatures are often referred to with the term “Atlantic Multidecadal Oscillation” (AMO) and exert a strong influence on Ireland’s climate. Variations in large-scale modes of atmospheric variability, such as the North Atlantic Oscillation (NAO), also strongly drive Irish climate variability.

To improve our understanding of the impact of the North Atlantic climate system on Ireland, Met Éireann is teaming up with climate researchers from NUI Galway – Irish Centre for High-End Computing (ICHEC) to collaborate on a four-year project to improve its modelling using EC-Earth’s state-of-the-art Earth system model. 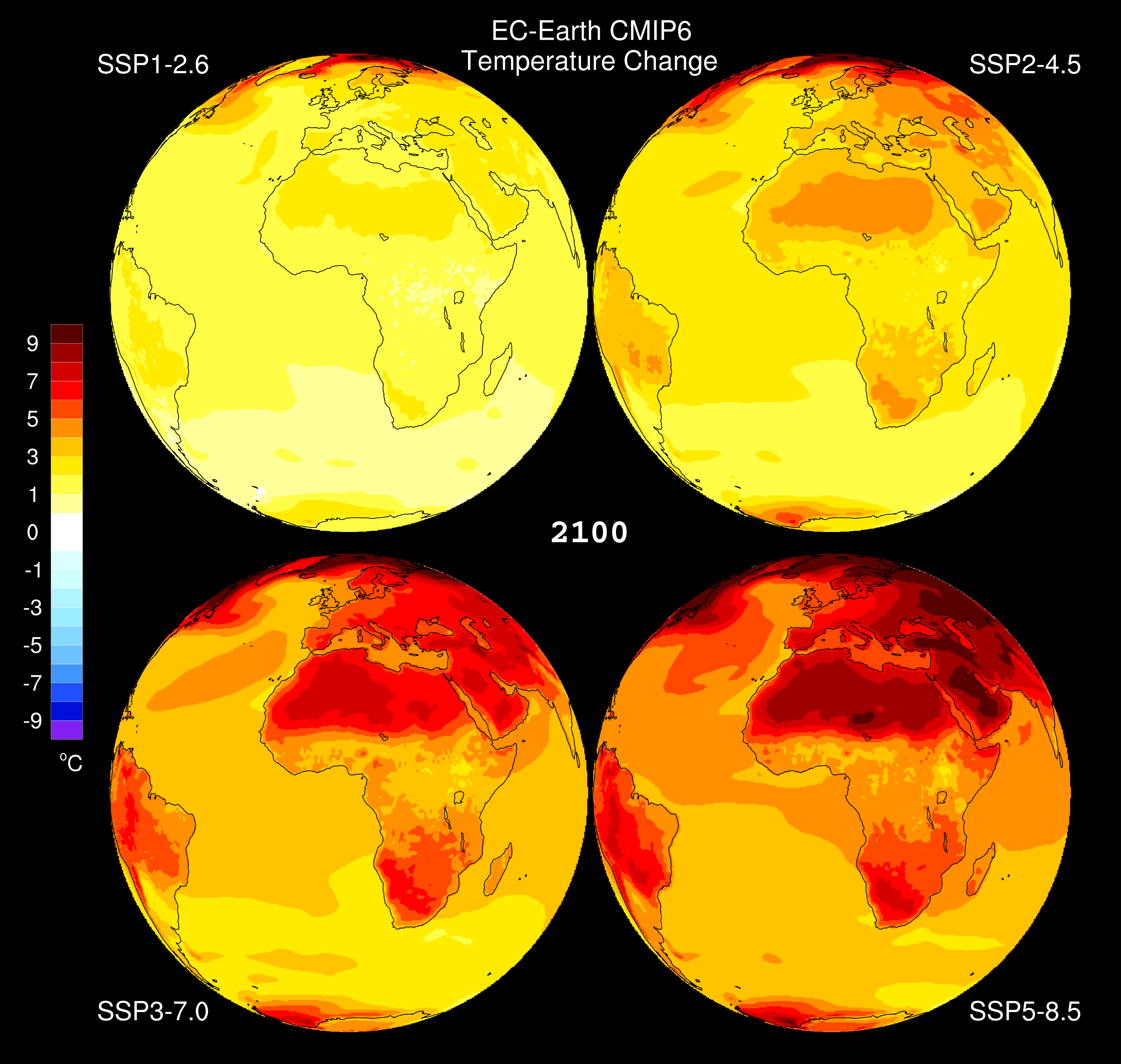 EC-Earth CMIP6 temperature change (℃) for the year 2100 with respect to the pre-industrial period (1850-1900) under the four main IPCC AR6 ScenarioMIP pathways – Figure courtesy of Paul Nolan.

EC-Earth is developed by a Europe-wide consortium of which Met Éireann is a core partner. Two additional Irish partners include ICHEC and UCD. Global climate simulations using EC-Earth contributed to the IPCC AR6 WG I report published in 2021. The consortium has recently begun development of the next version of the model, EC-Earth4, which will be used to inform the next IPCC assessment report, AR7. This research project will contribute to this development, in particular improving the model’s representation of the North Atlantic Ocean-Atmosphere system.

Dr. Saji Varghese, Met Éireann’s Head of Research, highlighted that “Ireland’s climate is dominated by the influence of the North Atlantic. It is therefore of strategic importance to build national climate modelling capability in this area. As Ireland begins to implement the Climate Action Plan, specific localised climate information will be required to inform climate-sensitive decision making. This project will ensure that this climate information is produced using state-of-the-art Earth system modelling and science.”

Dr. Paul Nolan, the recently awarded project lead at ICHEC, NUI Galway, stated “The project team will closely liaise with the EC-Earth Consortium and contribute to the development of the next version of EC-Earth4 in preparation for CMIP7, which in turn will inform the next round of IPCC AR7 reports. The resulting simulations will provide sharper and more accurate projections of the future global climate and lead to a better understanding, not only of the physical climate system, but also of the climate impact on societies. The project will inform national climate change policy by providing enhanced climate projections for Ireland under a range of emission scenarios”.

The project is funded by Met Éireann’s Weather and Climate Research Programme aimed at strengthening and developing capacity in key research areas associated with meteorology, climatology and hydrology. Research outputs from this programme will provide the evidence and tools necessary to inform government policy and action. Building on its internal research activities, in collaboration with national and international organisations and on its strategic partnerships with other research funding organisations, Met Éireann is proud to support the growth of national capacity through its own research funding mechanisms.