Climate Statement For May and Spring 2021

May was a cool and wet month everywhere with persistent and slow moving troughs of low pressure over Ireland for much of the month. This brought organised bands of rain across the country on several occasions, interspersed with showers, many of which were heavy, with numerous reports of hail and thunder throughout the month. The first week started relatively dry before a deepening area of low-pressure crossed the country from west to east on the 3rd and 4th, bringing wet and windy weather followed by heavy showers. At the beginning of the second week, another deep low-pressure system approached from the west. This brought widespread wet and windy weather on the 8th, followed again by several days of heavy showers as the low pressure stalled and filled over Ireland. The third and fourth weeks saw a continuation of this pattern, with rain or showers on most days as low pressure stayed in control. An especially deep area of low-pressure crossed the country on the 20th and 21st, bringing another spell of widespread wet and windy weather. The final few days of the month brought warmer and drier weather as high pressure built from the south.

Rainfall: Above average everywhere, especially in the South and East

Temperature: Below average everywhere, coldest in the West

All mean air temperatures across the country were below their Long-Term Average for the month. Deviations from mean air temperature ranged from -1.9 °C (9.0 °C mean temperature) at Markree, Co Sligo to -0.8 °C (10.0 °C mean temperature) at Phoenix Park, Co Dublin. Mean temperatures ranged from 8.9 °C (1.1 °C below its LTA) at Knock Airport, Co Mayo to 10.5 °C (1.2 °C below its LTA) at Sherkin Island, Co Cork (its coldest May since 1996). The month’s highest temperature was reported at Newport, Co Mayo on Sunday 30th May with a temperature of 23.1 °C. Both the month’s lowest air and grass minimum temperature were recorded on the 6th at Mount Dillon, Co Roscommon. The lowest air minimum was -4.0 °C (its lowest May temperature on record (length 15 years)) while the lowest grass minimum was -9.1 °C. All stations reported ground frost during the month. The number of days with ground frost ranged from 2 days at a few stations to 19 days at Mount Dillon, Co Roscommon. More than half of stations reported air frost. The number of days with air frost ranged from zero days at Mace Head, Co Galway to 5 days at a few stations. Four stations, had their coldest may on record. These were Mace Head, Co Galway (record length 17 years), Roches Point, Co Cork (record length 15 years), Mount Dillon, Co Roscommon (record length 15 years) and Gurteen, Co Tipperary (record length 13 years). Most long standing stations had their coldest May since at least 1996.

Sunshine: Above average everywhere, highest in the Northwest

Monthly mean wind speeds ranged from 5.5 knots (10.2 km/h) at Ballyhaise, Co Cavan to 13.0 knots (24.1 km/h) at Roche’s Point, Co Cork. Gales were reported on the 8th with up to strong gales reported on the 3rd and 20th. The number of days with gales ranged from zero days at a most stations to 3 days at Malin Head, Co Donegal. The number of days with up to strong gales ranged from zero days at most stations to 1 day at four stations. These were Mace Head, Co Galway, Malin Head, Co Donegal, Sherkin Island, Co Cork and Roches Point, Co Cork. Both the month’s highest gust and 10-minute mean wind speed were reported on Thursday 20th. The highest gust was 62 knots (115 km/h) reported at Sherkin Island, Co Cork while the month’s highest 10-minute mean wind speed was 46 knots (85 km/h) at Malin Head, Co Donegal.

Extreme values at synoptic stations – May 2021 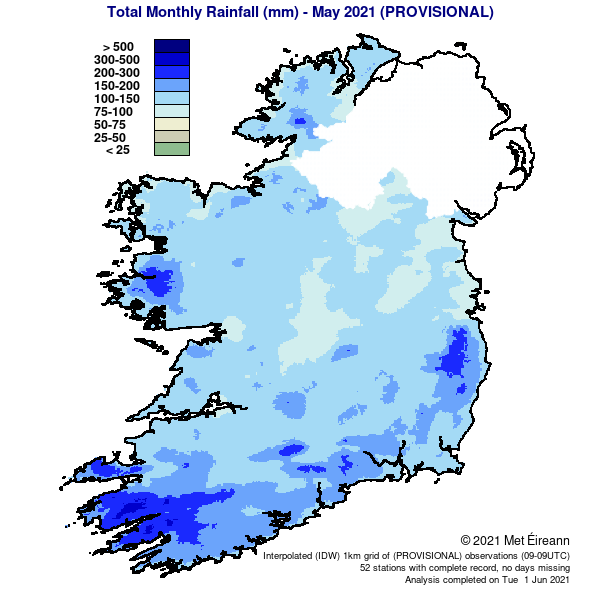 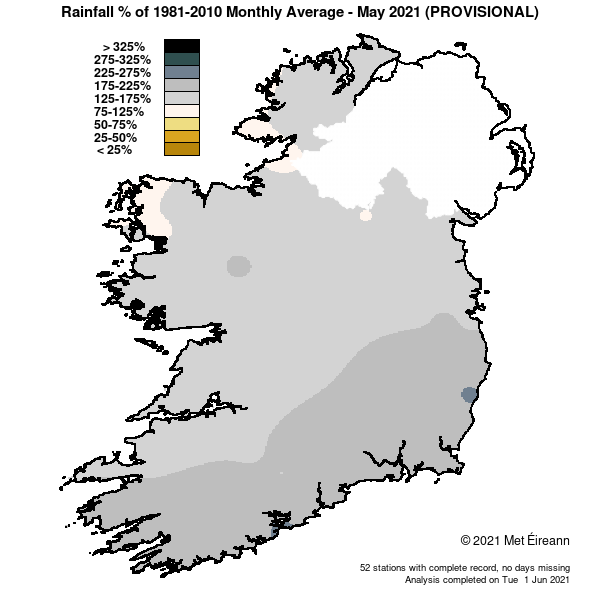 Cool and sunny, dry March and April, wet May

Overall Spring 2021 was relatively dry, sunny and cool. The Jetstream stayed to the north of Ireland through most of March, keeping the low-pressure sys-tems to the north also. High-pressure to the south and east dominated for much of the month. The first half of March was cool, but the second half was mild. There was below average rainfall in most places, especially the South and East. April was a very dry month with high pressure dominating. A shift in the position of the high-pressure systems, which often set up to the west or northwest of Ireland, brought cool polar air masses over the country on several occasions through the month. This led to below average temperatures everywhere, but also above average sunshine. The cool theme continued for most of May with the Jetstream displaced to the south. Persistent and slow moving troughs of low-pressure dominated the weather through May, leading to above average rainfall. Heavy showers with hail and thunder were a feature on numerous occasions. It warmed up at the end of May with high-pressure building from the south. 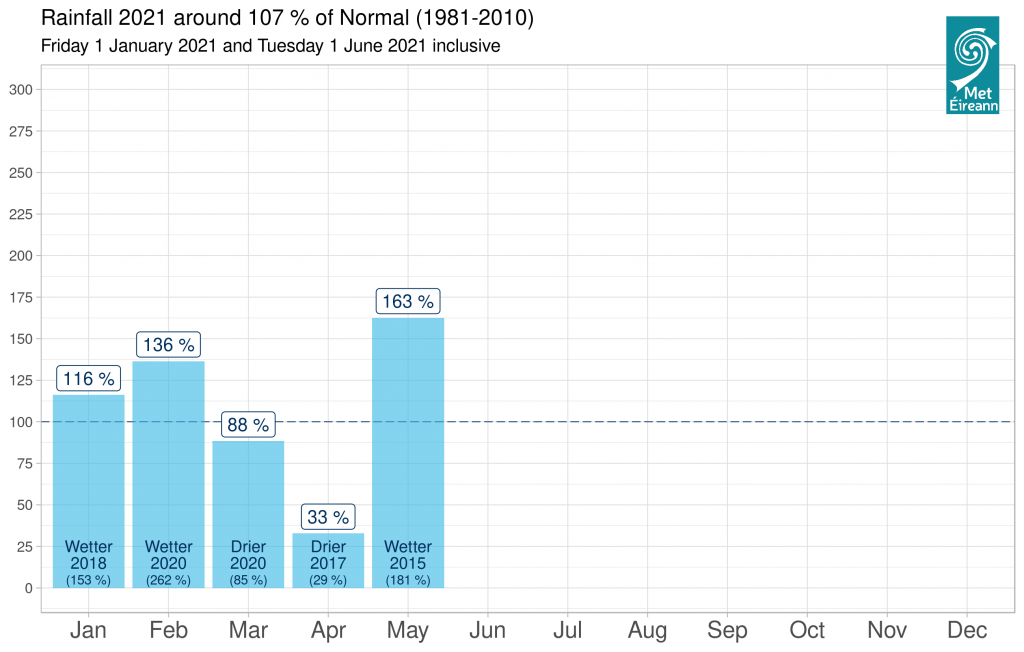