We can see in the second image taken at 11pm the storm’s occluded front, which was visible as the thick band of cloud in the shape of a comma head that is wrapped around the storm’s centre, push its way into to the middle of the country. With the front came heavy rain but also for a short while some sleet and snow along its leading edge. Our station in Knock airport recording 3cm of snow lying by 11am. Looking carefully at our composite image we can just discern this band of frozen precipitation as a light blue streak to the right of the thick white and warmer cloud of the front. The tip of the comma head often contains much of the highest winds and this is evident in the winds recorded at this time with Mace Head, Newport, and Athenry recording gusts of 133, 102 and 98 km/hr.

In our third image taken at 1pm, the front has spread across the whole of the country and ‘Jorge’ now shows signs of a maturing system. What was in our first image the tight core of the storm centre has become elongated as cold air, visible in the picture as the dark clear sector east and south of Ireland, was dragged into the centre. This has the effect of cutting the storm off from the supply of warm air which drives it and thus reducing its intensity. 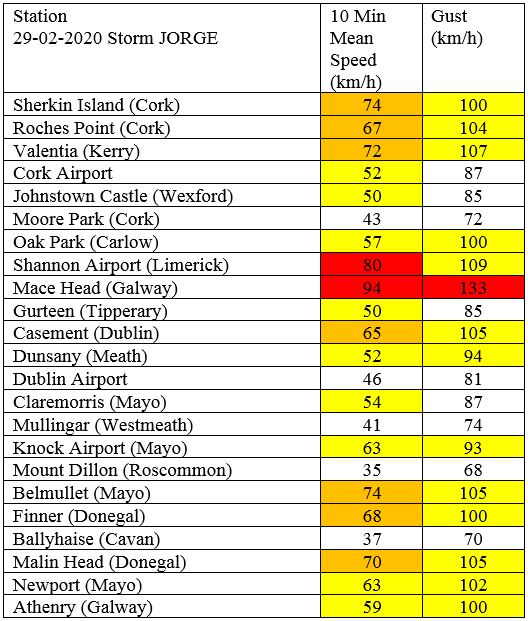