Very unsettled conditions are forecast for Ireland this Tuesday night into Wednesday morning, with heavy rain leading to a risk of flooding and the potential for very strong winds and damaging gusts. For any weather warning updates, please keep in touch with https://www.met.ie/warnings/today.

A broad scale upper-level area of low pressure, along with an associated surface low, will become established to the west of Ireland on Tuesday. A southerly component of the Polar Jetstream (a fast flowing air current around 10km above the Earth’s surface) will strengthen over Ireland during Tuesday (Fig 1.). This Jetstream can steer surface low pressure systems towards Ireland and intensify them, depending on the location of the low relative to the Jetstream. 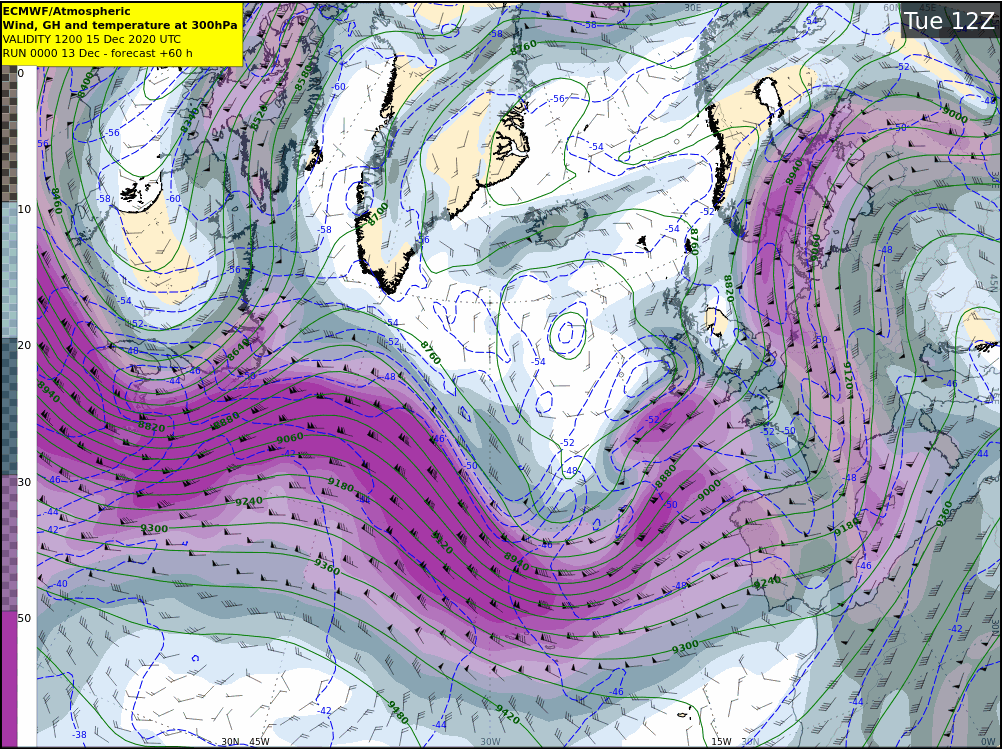 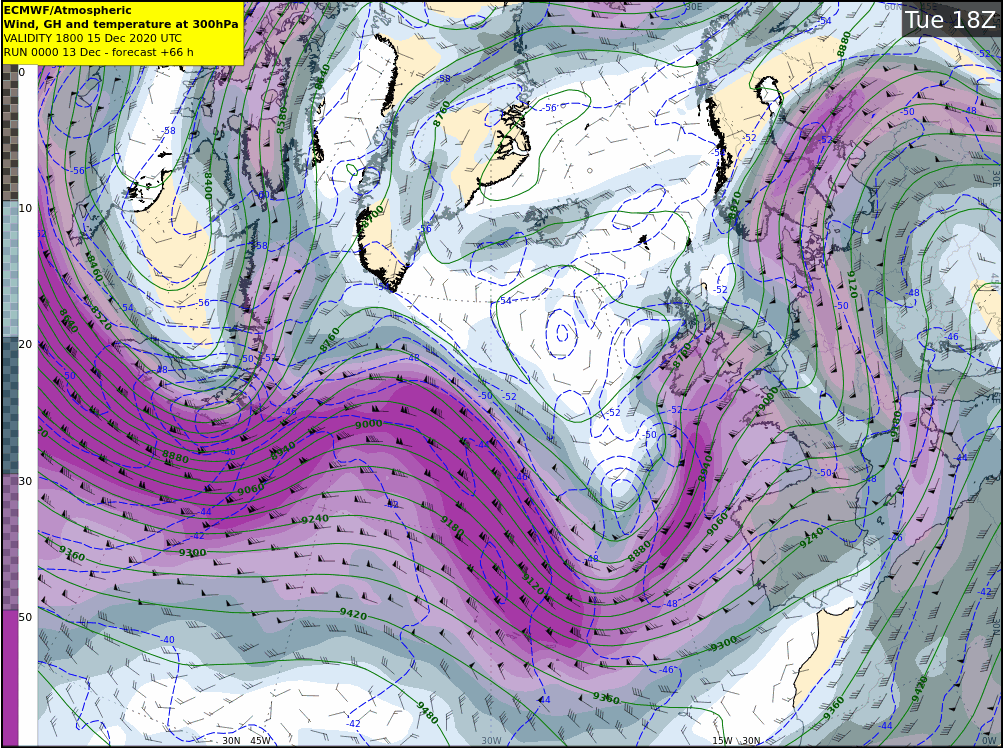 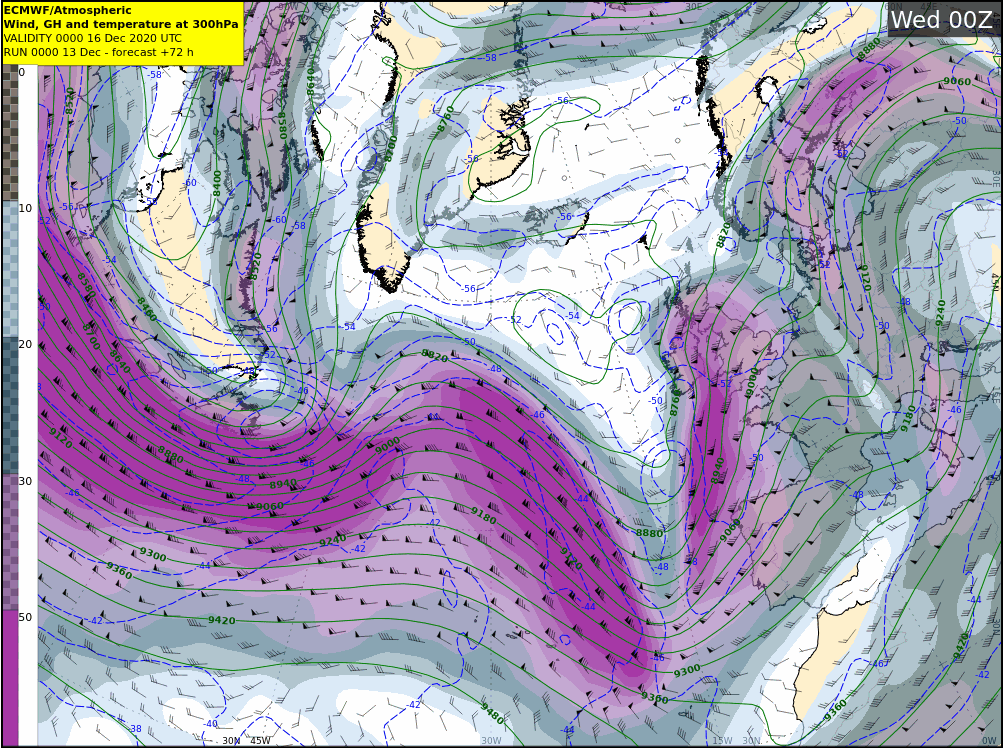 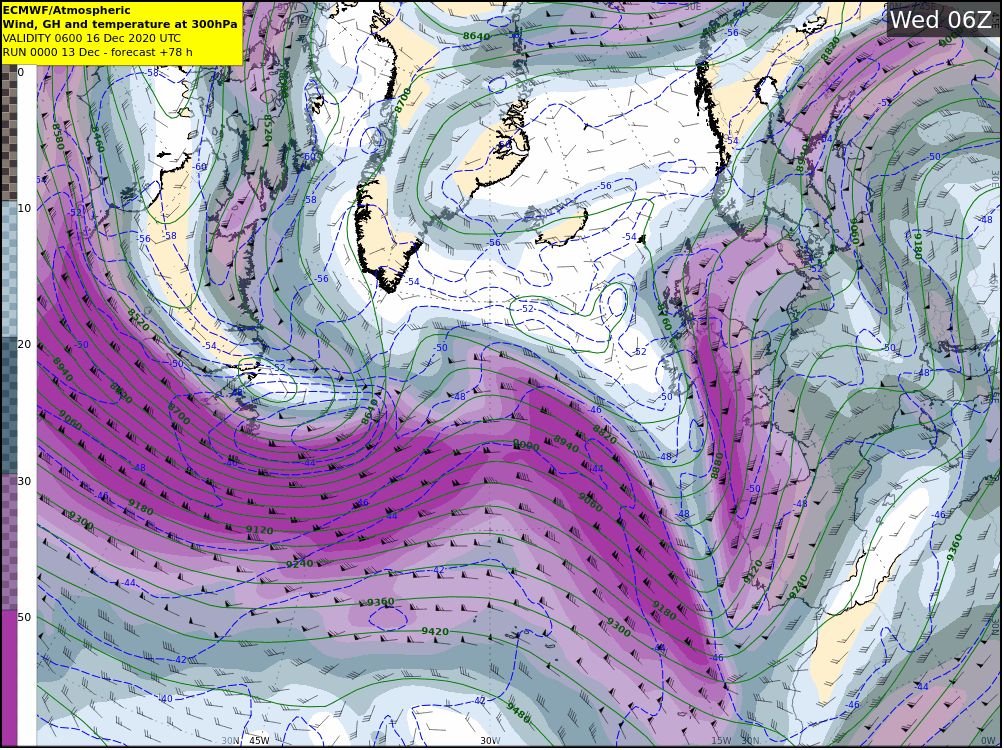 Fig. 1: The Jet-Stream across the North Atlantic from 12UTC Tuesday 15th December to 06UTC Wednesday 16th December, showing wind speeds at a height of 300hPa (Forecast chart issued by ECMWF).

A secondary low pressure system is forecast to form in the Mid-Atlantic on Monday and track eastwards through Monday night and Tuesday morning, deepening steadily. There is then generally good agreement between forecast models that the system will track towards Ireland, however there are disagreements between the models on its speed, intensity and track. Until these are resolved, there is uncertainty in the exact impacts on Ireland. 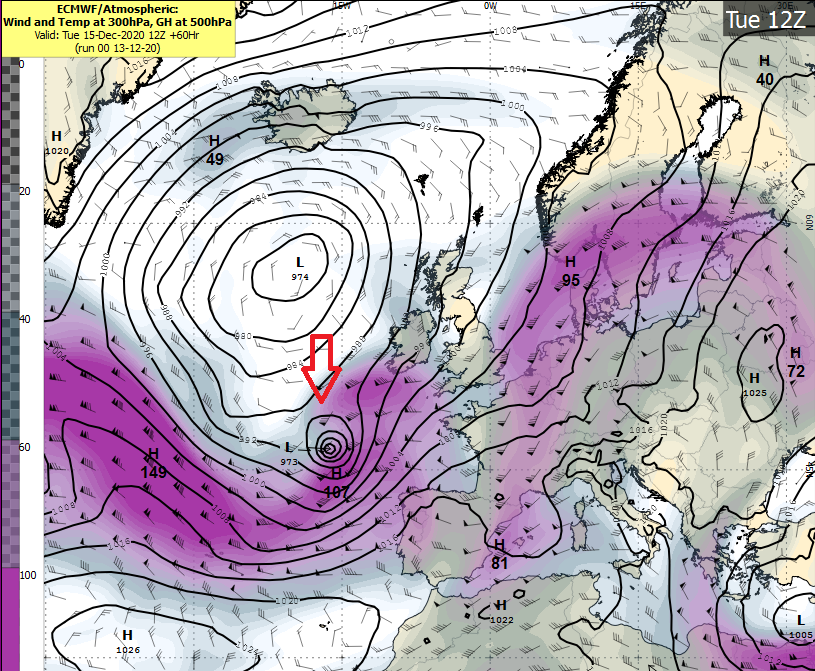 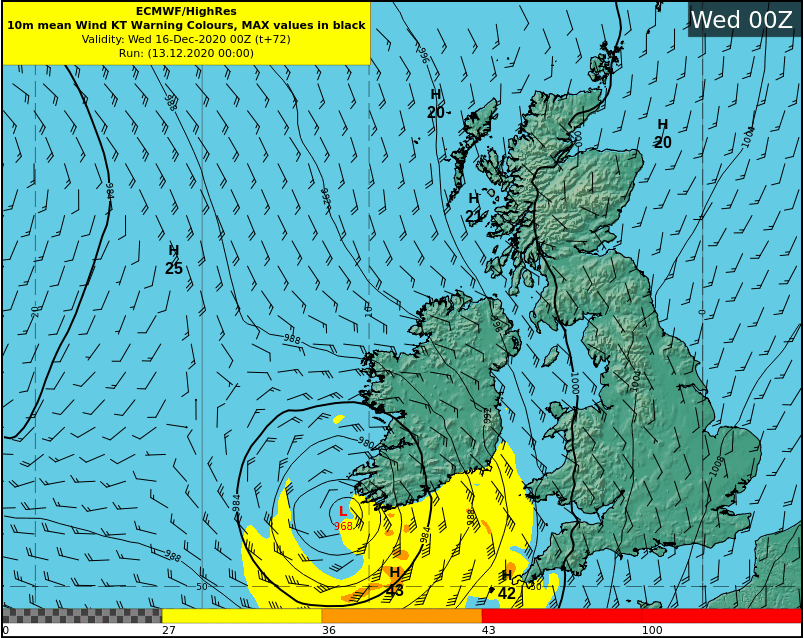 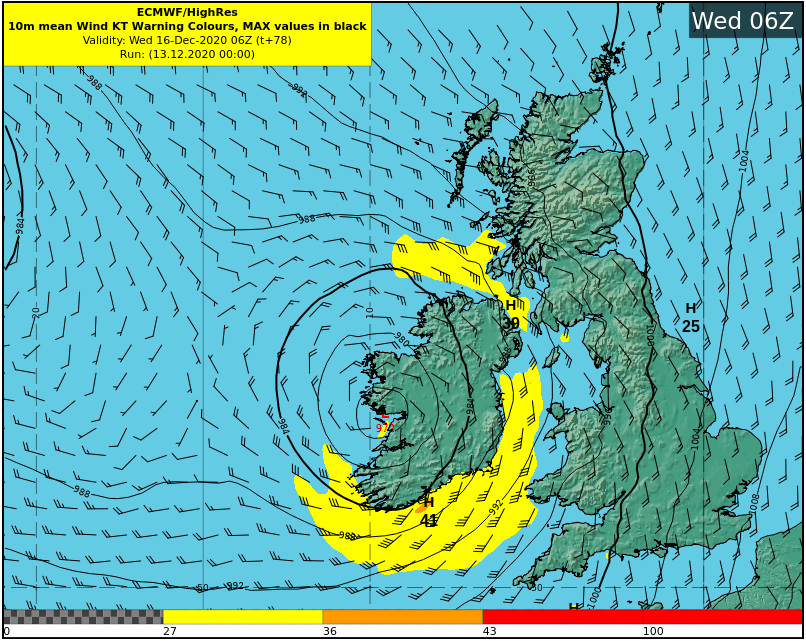 Fig. 4 illustrates the uncertainty in the positioning of the depression at 00UTC Wednesday, with the shaded areas showing the uncertainty. The ECMWF ensemble product consists of 51 separate forecasts made by the same computer model, all activated from the same starting time but with slightly different initial conditions. Ensemble forecast products give forecasters a picture of the range of possible outcomes in a weather event. 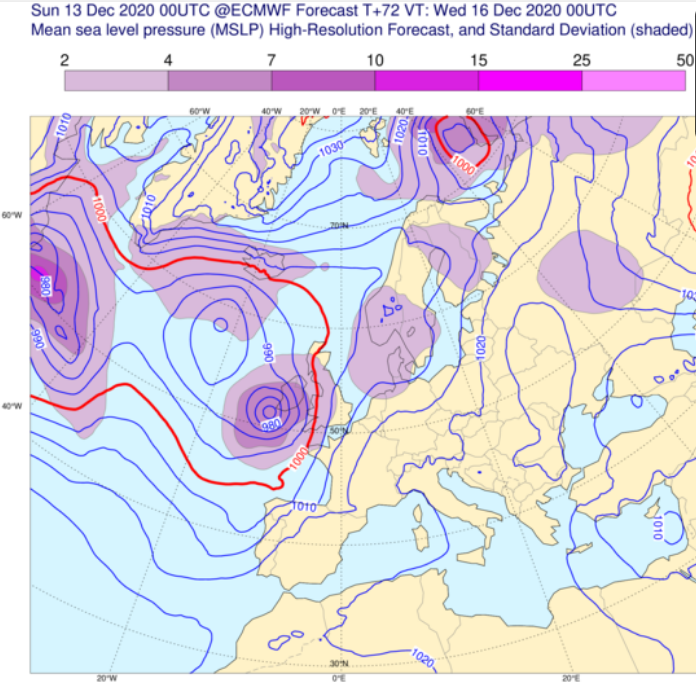 A band of heavy rain is forecast to move into the southwest on Tuesday evening, extending across the country during Tuesday night. The rain is expected to clear from most areas on Wednesday morning, although the west coast could see further heavy rain through the morning. While the rain will be heavy, its progression should be quite quick. However, due to soils being saturated or waterlogged there will be a risk of flooding (see below for further comments on flood risks). Based on the latest forecast, 6-hour accumulations of 10 to 15mm are expected in parts of the southwest and west. As indicated in Fig.5 (Valentia used as an example) there is uncertainty in the total precipitation expected from later Tuesday into Wednesday.

The current deterministic forecast by ECMWF tracks the depression along the west coast of Ireland on Tuesday night. The strongest winds are expected to be on the southeastern side of the system, so very strong south to southeast winds are expected in the south initially and then also in the east overnight Tuesday into Wednesday morning. There is also the potential for severe gusts. 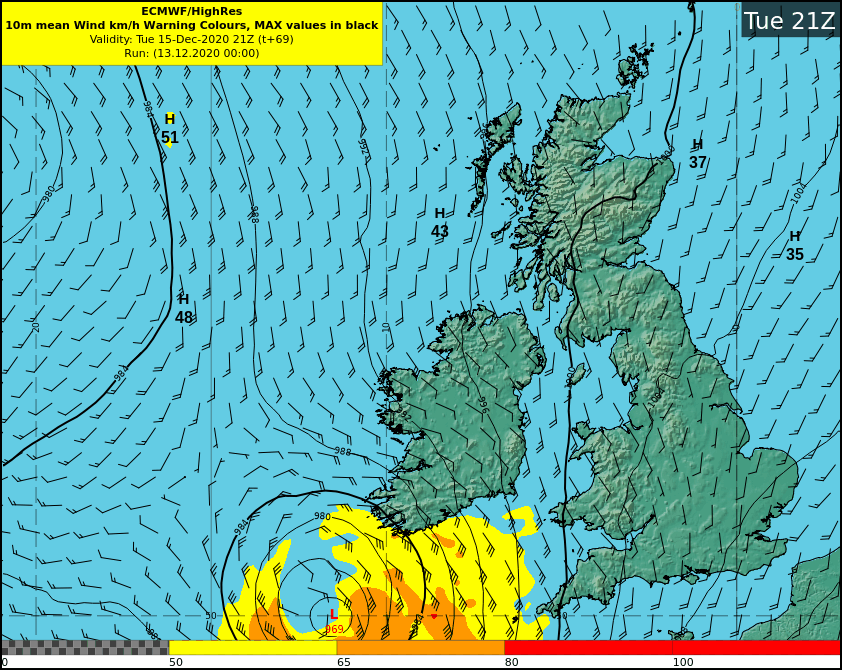 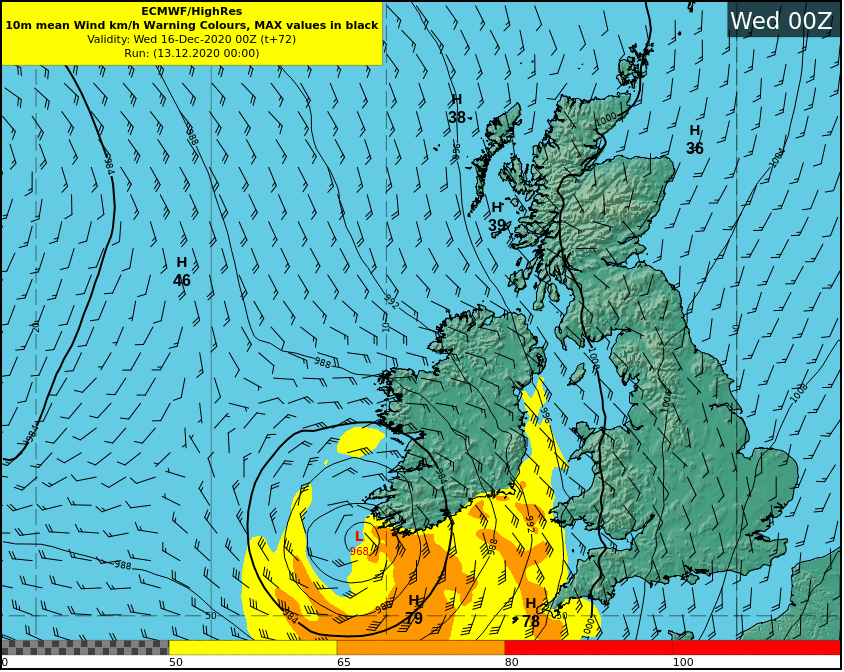 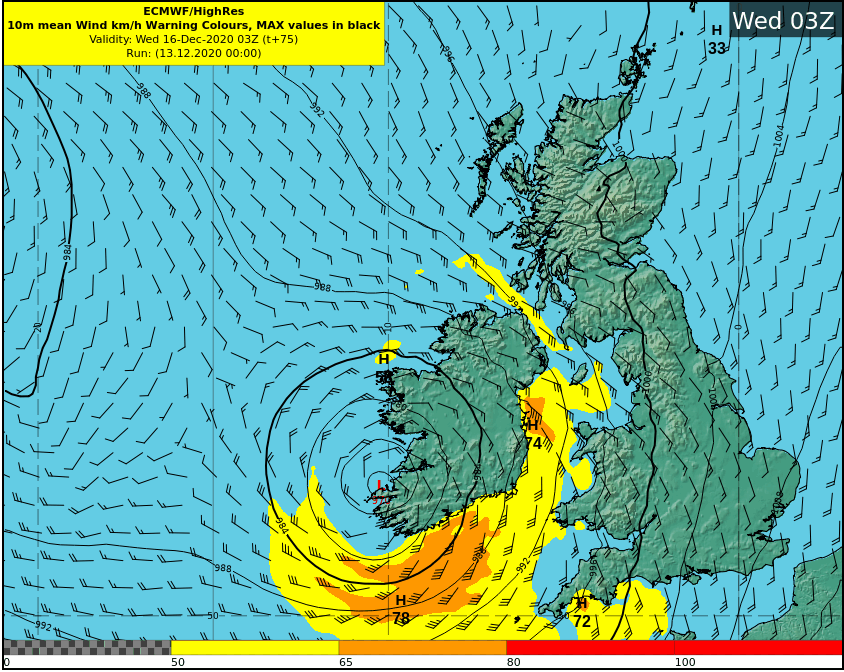 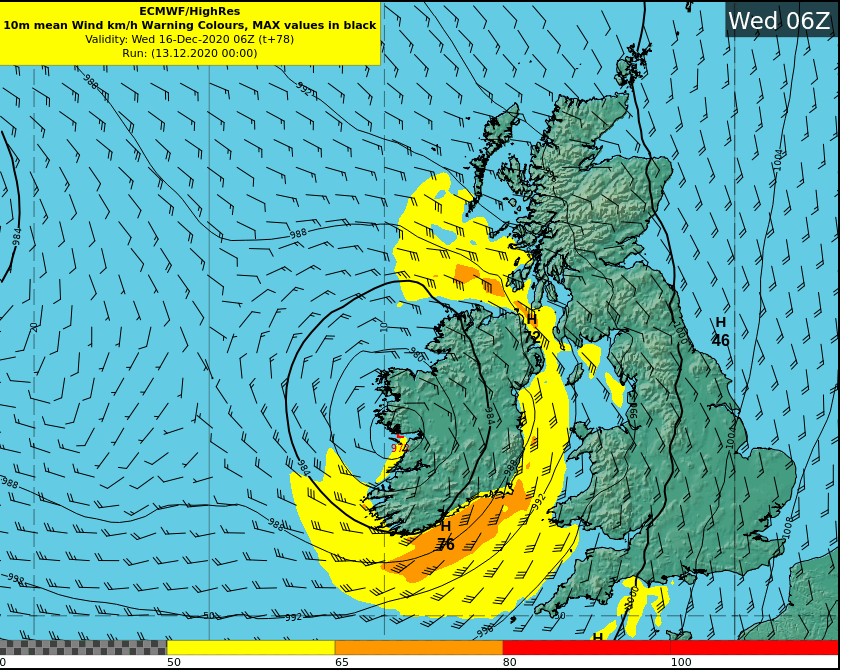 Any changes to the forecast of the track of this depression will impact the locations of the strongest winds.

We are in a period of Spring (High) Tides. The combination of Spring (High) Tides and very unsettled, potentially stormy, conditions associated with a depression on Tuesday/Wednesday, is likely to increase the risk of coastal flooding (spray overtopping and localised wave overtopping), especially in flood-prone areas along all Irish coasts (particularly when coincident with High Tides and onshore winds).

Please see below the approximate Spring High Tide times below for Tuesday and Wednesday:

Soils are mostly waterlogged countrywide, or at least in saturated conditions. Rivers are already elevated in the western half of the country, in response to appreciable rainfall over the last week or so. Over the coming days, multiple separate spells of rain (whilst individually these may not reach rainfall warning criteria) will further exacerbate the flood risk. Localised flooding is expected in the western half of the country over the next week.