An Update on Rainfall, Pollen and UV

Low Rainfall levels for March and thus far in April have brought drought and an increased risk of forest fires.

The majority of monthly rainfall recordings across the country were below their Long-Term Average for the month of March, as high pressure dominated our weather from mid-month. The lowest relative rainfall being 56% of the expected monthly rainfall at Moore Park, Co Cork, with a monthly rainfall total of just 47.9 mm. 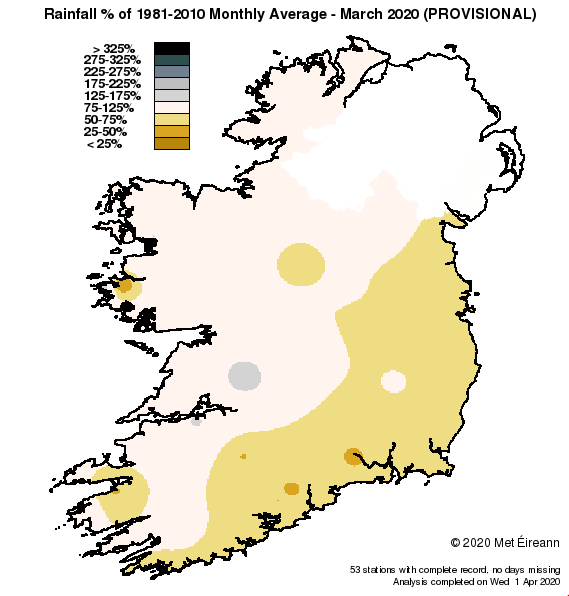 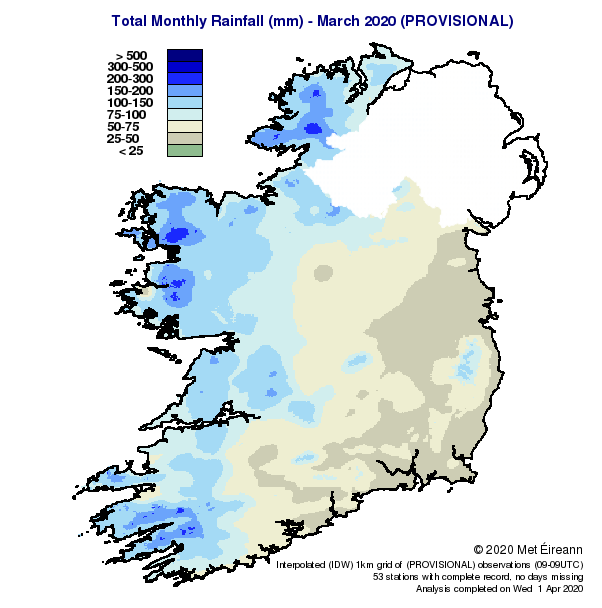 Recent Dry spells have been recorded at the following stations: 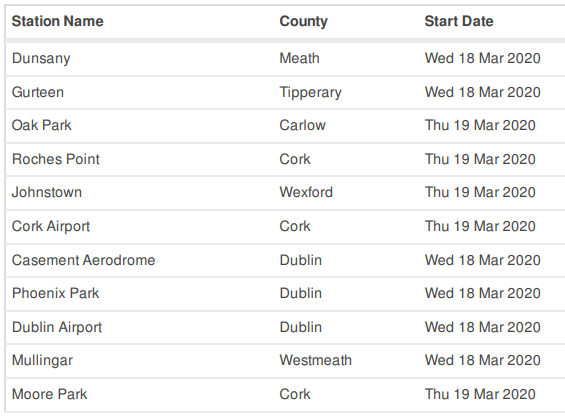 Absolute drought has recently been recorded at the following stations: 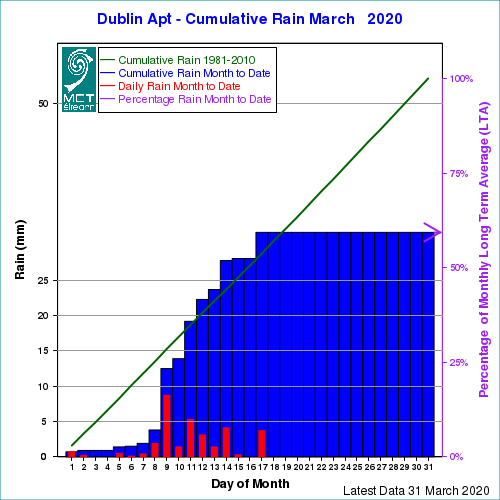 Above is the recorded rainfall for Dublin Airport for the month of March. The green line is the long term average (or expected) rainfall. The red lines are the daily rainfall amounts, with blue being the cumulative rainfall. Note the near zero rainfall from mid-March.

Find the graph for your local area here:

Choose “Rainfall Graph” from the menu. 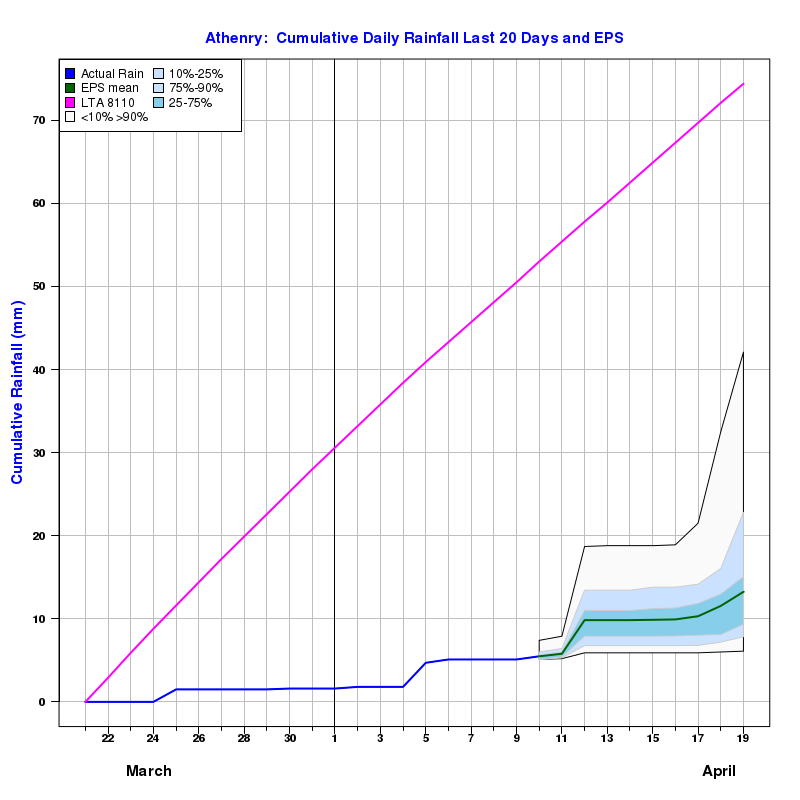 Above is the cumulative rainfall for Athenry in Co. Galway for the past 20 days. The pink line is the long term average (or expected) rainfall, the blue line is the actual amount received and the light blue/green lines is the range of rainfall forecast (from our model ensemble) over the next 10 days. This shows that rainfall is well below expected values and will remain so for the coming 10 days.

Rainfall totals were below average across the entire country in the past week. Largest relative totals of up to 86% of normal were measured in inland parts of southern Leinster, however most areas received only 10 to 50% of average rainfall for this time of year, mainly resulting from rainfall last Sunday, April 5th. 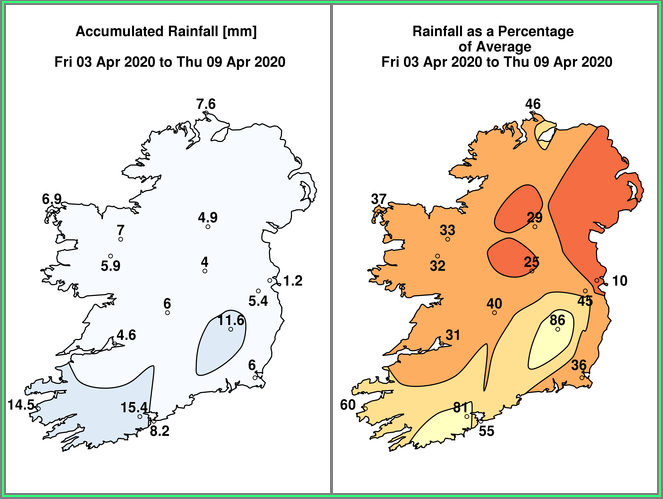 Areas in the west and north of the country will receive rainfall today, Friday, and again tomorrow Saturday, while it will remain mostly dry elsewhere. All areas will likely see rainfall on Sunday, before high pressure dominates our weather again from early next week, heralding another period of mostly settled, mostly dry weather.

Below, is the forecast rainfall (mm) for the next 7 days out to midday Friday April 17th. Most of this rain will fall this Sunday April 12th. 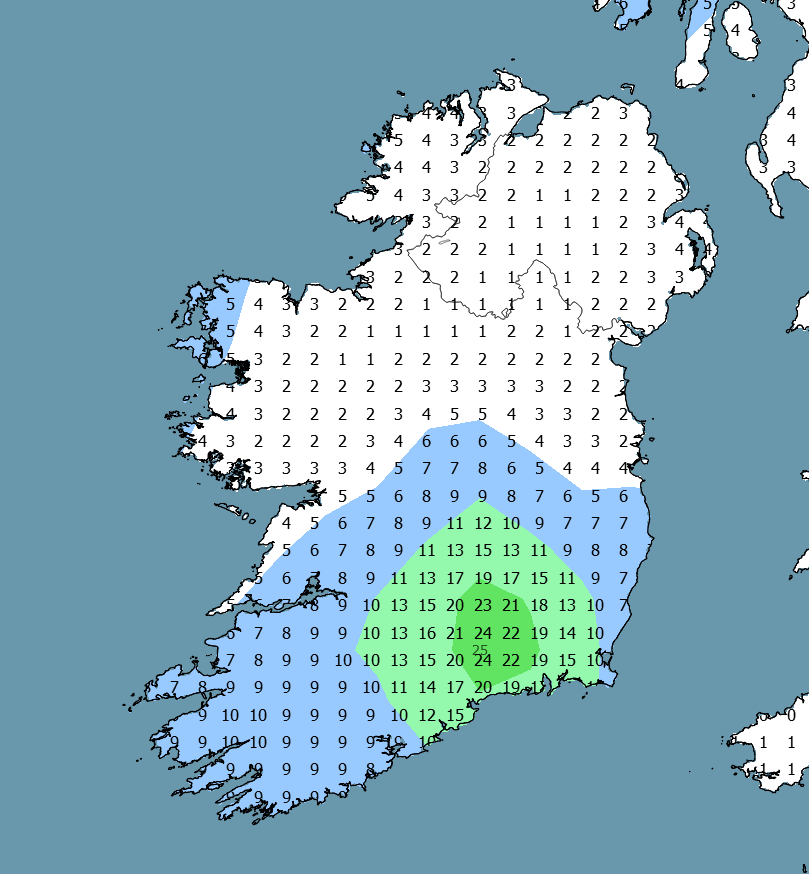 The longer range forecast for late April and early May is for our weather to be drier than normal with below average rainfall.

It is worth noting that with rainfall below average, the danger of forest fires / gorse fires burning out of control, increases

Also, the ozone hole over the Arctic is at its biggest (most damaging) at the end of winter and during spring, allowing more harmful UV rays to reach the surface.

Below, is the UV measurement from one of our Brewer Spectrophotometers (an instrument which measures ozone, and computes the UV level). This one is at Valentia Observatory in Co. Kerry, and the UV Index today is low due to cloud cover. 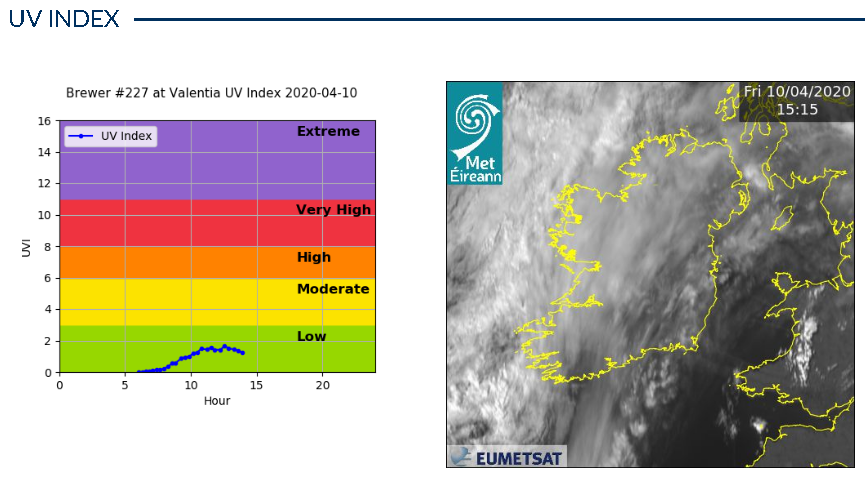 Daily U.V. forecasts will be issued by Met Éireann and be available on our website and social media from Tuesday April 14th.

Tree pollen peaks in Ireland in March and April with grass pollen at its peak from May to August. Daily pollen forecasts will be issued by Met Éireann and be available on our website and social media from Tuesday April 14th.