The HIRLAM numerical weather prediction (NWP) model (High Resolution Limited Area Model) has been one of the forecast models used as guidance by meteorologists working at Met Éireann since 1994. 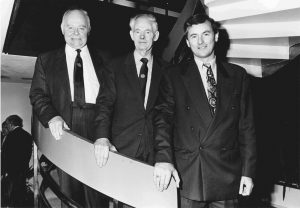 This model was run 4 times a day (at 0000, 0600, 1200 and 1800 UTC) producing two day forecasts. Denmark, Estonia, Finland, Ireland, the Netherlands, Norway, Spain and Sweden were involved in the development of the model. This morning the 0600 UTC forecast was the final run of the HIRLAM model which has served us well over the past 25 years. 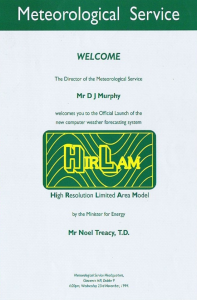 Since 2011 Met Éireann has also been running and developing a new high resolution mesoscale model called HARMONIE (HIRLAM ALADIN Mesoscale Operational NWP in Euromed). In 2018 we became one of the first countries to use HARMONIE for ensemble-based weather prediction; ensemble forecasting involves running the model several times to produce a set or ensemble of forecasts rather than a single forecast of the most likely weather. Ensemble systems are essential for accurate forecasting of high-impact weather events such as Storm Emma.

A short history of computer weather forecasting in Ireland, written by Peter Lynch, Emeritus Professor at UCD and former Assistant Director at Met Éireann, can be found here. In 2011 he gave a talk on this topic to the Irish Meteorological Society at their event which marked the 75th anniversary of Met Éireann – the presentation slides can be found here.