September 2020 started with low-pressure to the northwest, bringing active weather fronts across the country on Wednesday 2nd, with widespread heavy rain and some flooding in the Northwest. High pressure, which began to develop to the south of Ireland during the rest of the first week, gradually pushed the jet stream and low pressure systems further north, while keeping Ireland in a mild southwesterly airflow. This setup, which continued into the second week, brought a lot of dry weather, especially in the southern half of the country, but active weather fronts brought some heavy falls of rain to the North and North-west during this period. During the third week high pressure developed over mainland Europe and to the north of Ireland, which brought a warm and sunnier continental airflow over the country from the southeast and the dry conditions spread countrywide. The settled weather broke down at the beginning of the 4th week as a cold front brought a change of air mass with cooler conditions that continued for the rest of the month. The cold front was followed by an area of low-pressure crossing the south of the country on the 23rd and 24th, which brought widespread rain or showers. An area of high pressure gave a mostly dry final weekend of the month with plenty of sunshine, although cool at night with frost and fog in places. The month finished with active weather fronts moving in from the west on the 29th followed by heavy showers.

Rainfall: Below average for most
Nearly all rainfall totals were below their Long-Term Average (LTA) for the month. Monthly rainfall totals ranged from 41.6 mm (55% of its LTA) at Shannon Airport, Co Clare to 153.4 mm (117% of its LTA) at Newport, Co Mayo. Three stations in Co Cork had dry spells between Thursday 3rd and Monday 21st, including Moore Park, Cork Airport and Roches Point. 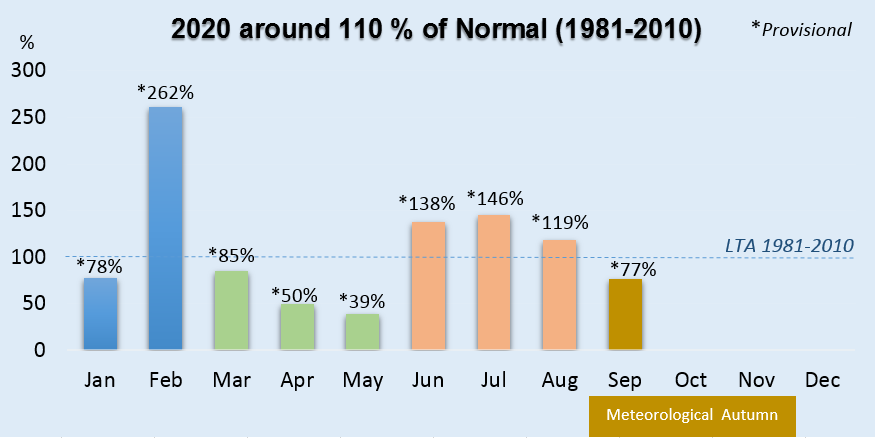 Temperature: Near or slightly above average overall
The majority of mean air temperatures were slightly above or slightly below their Long-Term Averages (LTA) for the month. Mean temperatures ranged from 12.0 °C (0.1°C above its LTA) at Knock Airport, Co Mayo to 14.2 °C (0.1°C be-low and 0.3 °C above their LTA respectively) at Sherkin Island, Co Cork and Roche’s Point, Co Cork.