Wetter, cooler and cloudier in the West. Drier, warmer and sunnier in the East

June was a relatively mild month with above average rainfall for many, especially in the West. The airflow was mostly between southerly and westerly, which brought numerous Atlantic weather fronts across the country at times, along with periods of strong convective shower activity. There was a lot of sunshine in the East and Southeast at times, while the West and Southwest had a duller month. Pressure remained relatively high for most of the first week and between the 12th and 23rd, which weakened the weather fronts and brought a lot of dry weather. The bulk of the month’s rainfall fell during two main periods. The first was between Tuesday 7th and Saturday 11th when two Atlantic low pressure systems passed close to the Northwest of Ireland, one containing the remnants of ex-tropical storm Alex. This brought widespread rain or showers and unseasonably windy conditions. The second saw a trough of low pressure sitting directly over Ireland and the UK for the final week of the month. This brought the wettest spell of the month with widespread heavy rain or showers on most days, along with further unseasonably windy conditions.

Rainfall: Above average in most places, highest in the West and Southwest. Below average in the East

Temperature: Mostly above average, below average at some stations in the West

The majority of mean air temperatures across the country, away from the West, were above their 1981-2010 Long-Term Average (LTA) for the month. Deviations from mean air temperature ranged from -0.3 °C (14.2 °C mean temperature) at Shannon Airport, Co Clare to 0.9 °C (14.4 °C the month’s highest mean temperature) at Phoenix Park, Co Dublin. Mean temperatures for the month were lowest at Knock Airport, Co Mayo with 12.3 °C (0.1 °C above its LTA). The month’s lowest temperatures were recorded on Thursday 2nd with the lowest air minimum reported at Mount Dillon, Co Roscommon, with a temperature of 2.1 °C and the lowest grass minimum reported at Dublin Airport Co Dublin with -2.1 °C. The highest maximum was reported on Thursday 16th at Phoenix Park, Co Dublin with a temperature of 23.9 °C. There was no air frost reported this month. Less than half of stations reported ground frost. The number of days with ground frost ranged from zero days at a few stations to 3 days at Dublin Airport, Co Dublin. 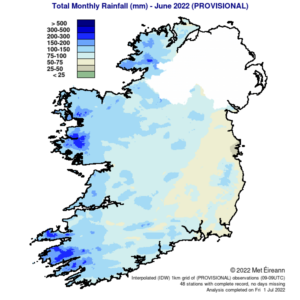 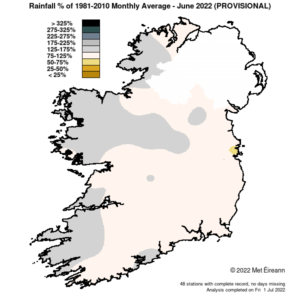