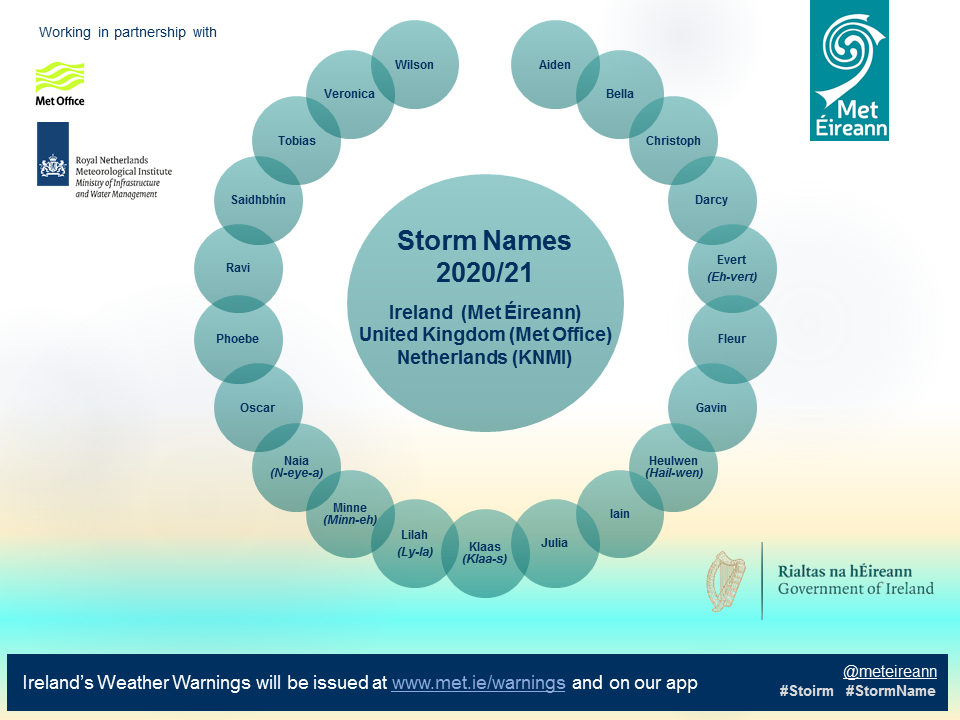 Met Éireann, the UK Met Office and the Dutch National Weather Service (KNMI) have unveiled the list of names for the 2020/21 storm season. The three national meteorological services worked together to compile the list of names based on suggestions from the public and particularly includes some names that reflect the three nations’ diversity.

Naming storms was first introduced by Met Éireann and the UK Met Office in 2015 and joined by the Royal Netherlands Meteorological Institute (KNMI) in 2019 forming the West group. The Southwest group consists of Portugal, Spain, France and Belgium.

Once a storm is named by any National Met Service globally, that name is retained if the storm moves into our waters. For example: Ophelia and Lorenzo were named by the National Hurricane Center (NHC, USA) and Emma by IPMA (Portugal). The names are in alphabetical order, alternating between genders. Following the NHC convention names beginning with Q, U, X, Y and Z are not used.

Evelyn Cusack is Head of Forecasting at Met Éireann and is also Chair of the European Met Services’ Storm Naming Working Group: ‘The naming of storms by National Met Services (as well as colour coding weather warnings as Yellow, Orange or Red) provides a clear, authoritative and consistent message to the public and prompts people to take action to prevent harm to themselves or to their property.’

Evelyn adds: ‘The storm names also add an extra interest for people with particular excitement in a family when one of their names appears in the list. We mostly pick names that can be easily pronounced but some are less generally recognised. Perhaps (hopefully!) we won’t get as far as Heulwen, a striking Welsh girl’s name, but for the non-Welsh among us we have included an aide to pronounce it just in case (Hail –wen). But although I would love in theory to be able to use the Irish name Saidhbhín if we get that far down the list it will have been a really punishing season!

Will Lang, Head of the National Severe Weather Warning Service at the UK Met Office, said: “We are now entering our sixth year of the Name our Storms campaign and we look forward to working closely with our colleagues in Ireland and the Netherlands once again, continuing to raise awareness of the potential impacts of severe weather in order to keep people across our nations safe.

“The impacts from Storm Ciara and Dennis earlier this year are still fresh in many people’s minds and although it’s too early to anticipate what weather this autumn and winter will bring, we are prepared with a new list of names to help raise awareness of severe weather before it hits.”

Gerard van der Steenhoven, Director General at Royal Netherlands Meteorological Institute (KNMI) said: “We gladly continue our collaboration with the UK Met Office and Met Éireann on storm forecasting. As storms are not confined to national borders, it makes a lot of sense to give common names to such extreme weather events. For us at KNMI, it is a great privilege and advantage to work in close co-operation with our colleagues from Ireland and the UK in the communication about storms.”

Is Our Weather Getting Worse?

There is heightened awareness now of weather warnings through social media as well as through traditional Radio and TV. This awareness has been catapulted into the public arena by the colour coding of warnings and this storm naming scheme. People really feel that the number of storms have risen and the weather has gotten worse. After a lengthy fine spring and a pretty good June the summer of 2020 turned increasing unsettled culminating in two storms at the end of August, Ellen and Francis, resulting in extensive flooding damage in the south and ranks closely with August 1986 which also had two storms. The first on August 5th 1986 would certainly be a named storm nowadays and the second one was ex-Hurricane Charley (Kilcoole had 200mm in 24-hours the wettest day on record). A report on these storms is available in our August 1986 Monthly Weather Bulletin.

Our website has received over 66 million page views from almost 8 million users for the 2019/20 storm season which began in September 2019. During these storms, the most popular page was the homepage, then the National Forecast page, and then the Weather Warnings page. On 3rd October 2019, Storm Lorenzo arrived in Ireland and met.ie had a record breaking 1.3 million page views that day although thankfully impacts were few as its social media fame exceeded its effects.

Rainfall across Ireland has increased by about 6% in the last 30 years which is consistent with a warmer atmosphere being able to hold more moisture. Also in a warming world whilst the frequency of north Atlantic storms may be expected to reduce somewhat, their intensity is expected to increase resulting in more destructive and harmful impacts. www.met.ie/climate/climate-change

Notifications
Push notifications for all weather warning levels (yellow, orange and red) for your location are available on the latest version of the Met Éireann App. These notifications now give the weather element, the areas warned for as well as the validity times of the notified warnings. You can also sign up to receive emails / SMS(red only) of weather warnings on Met Éireann’s web site (warnings).

In June 2020 Met Éireann began displaying weather warnings for Northern Ireland on its app and web site. This provides a clear, authoritative one-stop shop for easy and reliable access to the latest weather warnings for the Island of Ireland. In particular it is hoped that this all-Ireland warnings display will promote citizen and societal safety in border regions www.met.ie/warnings

Another important development in our warning service is also being launched this week. It is the introduction of a three-day Tab display of the warnings on the Met Éireann website and app. This separates warnings into three days starting with ‘Today’ and should provide for clearer communication and understanding of the complex weather scenarios which can affect Ireland most especially in winter. For example both wind and rainfall warnings as well as snow and ice warnings are possible over three days for different locations and different durations and intensities due to different weather events.

Accurate warnings out to three days ahead have been made possible by the introduction in April 2020 of the Met Éireann  54-hour, 11-member ensemble forecast which is run four times per day. Read about this in the article ‘Upgrade to Met Éireann’s Forecast System’ at www.met.ie/forecasts/meteorologists-commentary

These ensembles provide forecasters with an objective way to predict the skill of a forecast and to estimate the most likely scenario resulting in improved forecasts and warnings. This enhances support for impact-based decision making for weather events and contributes to the safety of citizens and property.

Please be weather prepared and stay safe by signing up for warnings notifications on your Smart phones and always get the latest forecasts and warnings from the Met Éireann website and app. 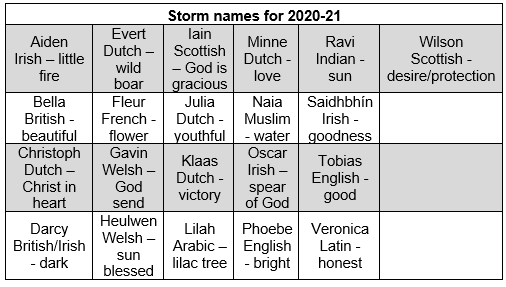