Heatwave in parts of Europe June 2022

What brought the heat to the south-western part of the continent?

High pressure ridge already formed in the South West Europe by 12 June 2022, with an Atlantic low-pressure system between the Azores islands and Madeira, which caused the uprising of warm air in western Europe (source: WMO). This ridge did not move and the temperatures rose gradually day to day. Maximum temperatures were often above 30°C and 8 to 10°C higher than the climatological average. 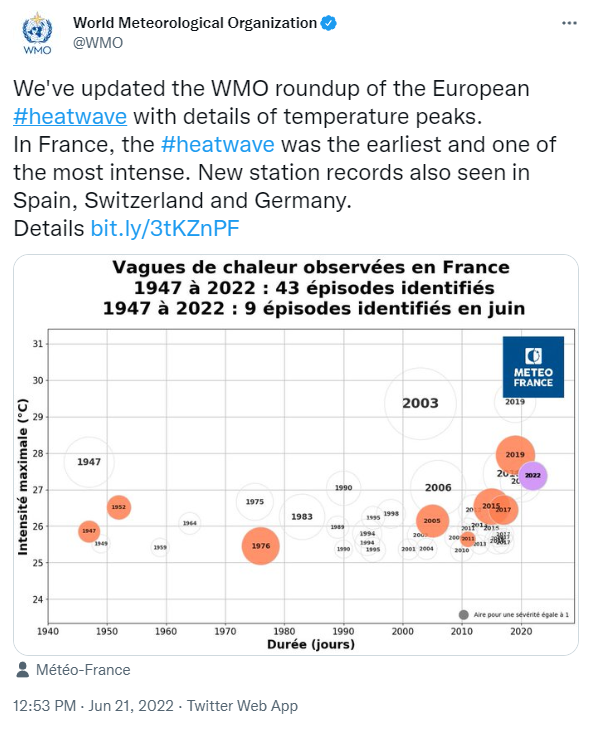 The heatwave is expected to come to the rest of central and south Europe in the next few days. While a Saharan dust storm will deteriorate air quality in southern France, Italy, Balearic Islands, Spain & the Balkan Peninsula.  (source: CopernicusEU) .

“Climate projection models suggest that heatwaves as likely to become more frequent, longer and more intense, start earlier and finish later than in the past.” Keith Lambkin, Senior Climatologist.

Why did Ireland not achieve these high temperatures?

On Saturday,  a front lay over the southeast of the country which slowly cleared south-eastwards. A moderate northwest breeze which felt cool and kept the temperatures low. On Sunday, there was a depression of 999 hPa centred to the northwest of Scotland which was tracking eastward. So the air across Ireland is flowing eastward, keeping the continental heat away from our shores.

What is a climatological heatwave in Ireland?

In terms of climate monitoring in Ireland, a heatwave occurs at a station if it observes a daily maximum temperature of over 25 degrees Celsius (> 25 °C) for five (5) consecutive days or more

In general in Ireland, heatwaves occur in June, July and August. There has been only one instance of a heatwave beginning in May (Glenties Hatchery, Co Donegal in 2012) and four starting in September, all within the first 2 weeks – one occurring in 1959 and the others occurred in 1991. The peak month for heatwaves in Ireland is July. The average heatwaves is 6 days long. It would be rare to have a heatwave longer than 9 days. The longest heatwave observed is 14 days in Laois and Offaly in August 1976.

Temperatures in June 2022 so far

The highest daily maximum shaded air temperature of 2022 so far is 23.9°C which occurred on Thursday 16 June 2022 at Phoenix Park, Co Dublin.

Currently June 2022 is two thirds completed and is 41st warmest June on record (Island of Ireland long-term series, 123 years) with an average temperature to yesterday of 13.7°C. This value is a half degree above June’s 20th century average (1901-2000) and is currently on average to the 1991-2020 June average. Typically in Ireland, we would expect warmer temperatures towards the end of the month, as the summer progresses. So we are expecting June 2022 to be warmer than 41st warmest. We will have to wait another 10 days to find out however.

What’s in store for the coming days of June 2022

Keep up to date with the latest forecasts and warnings:

What we measure – Temperature

Today is the #SummerSolstice and #ShowYourStripes Day. Source: showyourstripes.info/l/europe/ireland