A strong Stratospheric Polar Vortex1, well coupled with the troposphere, has led to the North Atlantic Oscillation2 being in a strongly positive phase during February 2020. This has resulted in a very zonal pattern across the Atlantic with a strong Polar Jetstream, further south than normal, steering a series of vigorous Atlantic depressions, towards or just to the north of Ireland. These depressions, including three named storms Ciara, Dennis and Jorge, brought prolonged periods of heavy rainfall and stormy weather leading to extensive flooding in places, particularly along the Shannon catchment. Heavy rainfall falling on already saturated ground and low winter evaporation rates exacerbated the flooding.

The position and strength of the Polar Jetstream has resulted in 1.5 to 3.3 times the normal monthly rainfall for February throughout the country (a month usually associated with one of the least rainfall amounts). 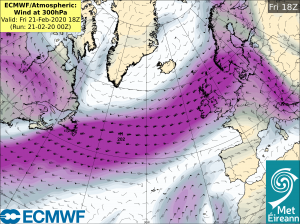