Winds slowly ease as Storm Barra moves away from Ireland

Winds have eased across the southern half of Ireland as Storm Barra continues to move into the North Sea, though it’ll remain windy across northern areas until Wednesday evening.

Met Éireann Meteorologist, Aoife Kealy, said: “Storm Barra will continue to track away from Ireland and into the North Sea this evening and whilst winds have largely eased across the southern half of Ireland, some north western areas will continue to see windy conditions and possible impacts until this evening.”

“Conditions at sea will also remain rough and dangerous until tomorrow morning and the Irish Coast Guard are urging the public to remain mindful of the risks associated with stormy sea conditions.”

Storm Barra brought widespread severe and damaging winds and heavy rain across Ireland on Tuesday and early on Wednesday.  Sherkin Island recorded a wind gust of 135km/h and a mean wind speed of 111km/h on Tuesday, just shy of its all-time station record of 113km/h on 12th February 2014.  Impacts were felt across the country, with fallen trees nationwide and reports of spot flooding in areas, power outages to almost 60,000 premises and travel disruption with several road closures and delays and cancellations to bus, rail, air and ferry services.  Customers without power can check for updates on when their fault is expected to be repaired at https://www.powercheck.ie/.  Irish Water have reported a number of supplies are without water – live updates on outages are available from the Irish Water twitter account @IW_Care, and on their website. 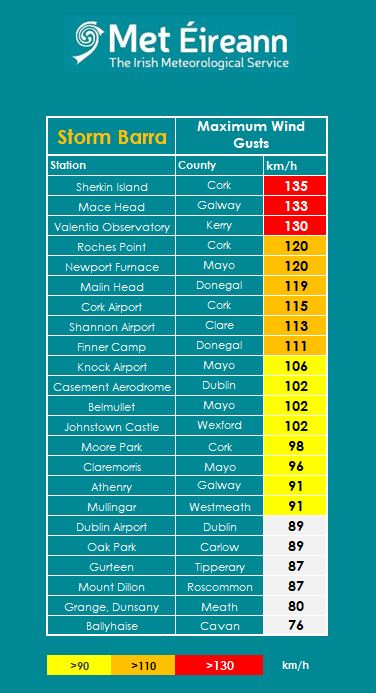 Met Éireann meteorologist Aoife continued: “Some areas will see spells of rain and sleet for the rest of today, particularly parts of Ulster and north Leinster, but as Storm Barra finally clears Ireland later tonight it’ll turn dry, calmer and clear for a time with frost and ice possible.

“It’ll stay generally unsettled as we head into the weekend, but winds will be much improved.  On Thursday we can expect outbreaks of rain, sunshine and showers on Friday and then more rain over the weekend.”

Storm Barra is departing our shores, but what’s in store for the rest of the week?

Slowly improving, as winds ease
Some rain tomorrow, with sunshine & showers on Friday
Some more rain at times over the weekend