What are teleconnections and how do they influence Ireland’s weather?

Teleconnections are recurring and persistent, large-scale patterns of atmospheric pressure anomalies that link climate in areas that are far away from each other. The most well-known and important pattern in the North Atlantic region is the NAO or North Atlantic Oscillation. The East Atlantic (EA) and Scandinavian (SCA) patterns also have an effect on the climate of the North Atlantic area. 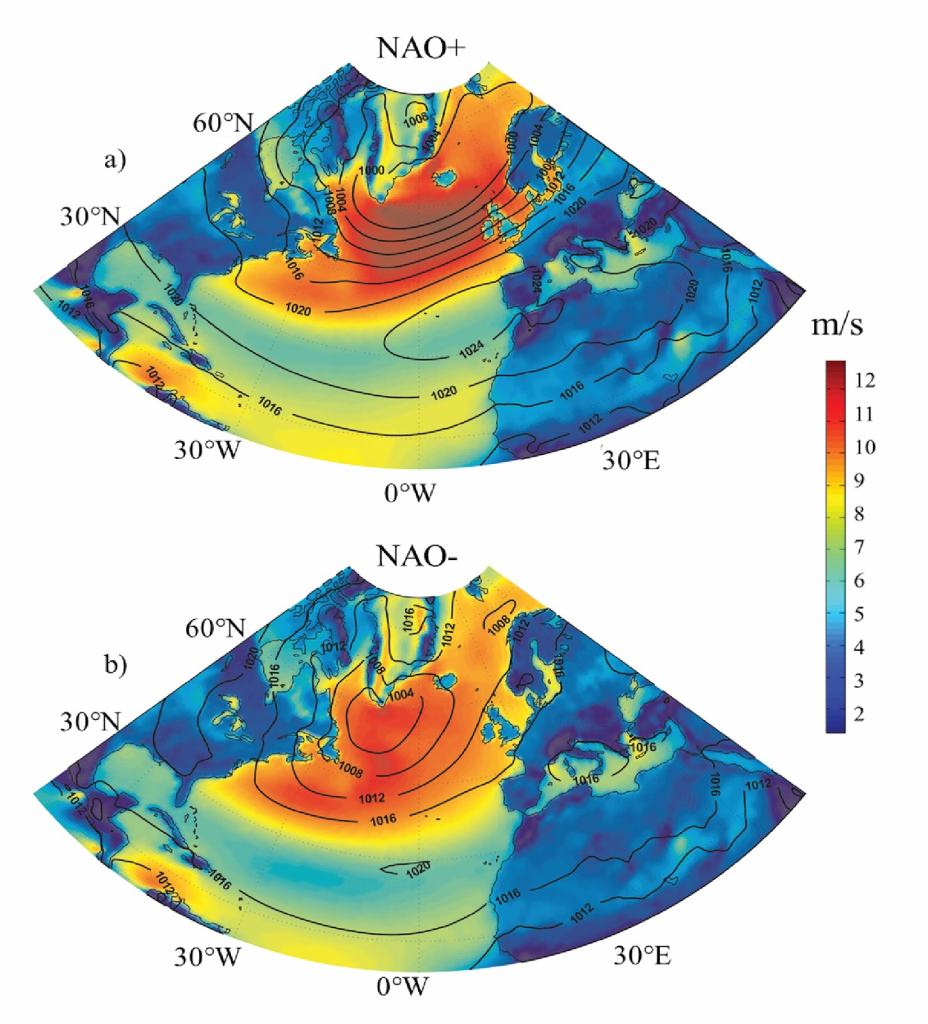 The NAO index is most commonly defined as the difference between mean sea-level pressure (MSLP) anomalies in the Icelandic Low and Azores High action regions. Stykkisholmur, Reykjavik or Akureyri (all in Iceland) are commonly used for the specific locations in the Icelandic Low and Ponta Delgada (Azores), Lisbon (Portugal) or Gibraltar for the Azores High. The station-based NAO index can be calculated using station observations or gridded reanalysis datasets. The NAO index and other similar indices can also be calculated using statistical methods, that use long-term gridded data produced by climate models and climate reanalyses, to identify patterns or modes that explain the variability contained in the pressure fields in the dataset.

Variations in the amplitude and phase of the NAO manifest themselves in changes to the position and extent of the jet stream and the Atlantic storm track and also the frequency and intensity of anticyclones or blocking patterns. 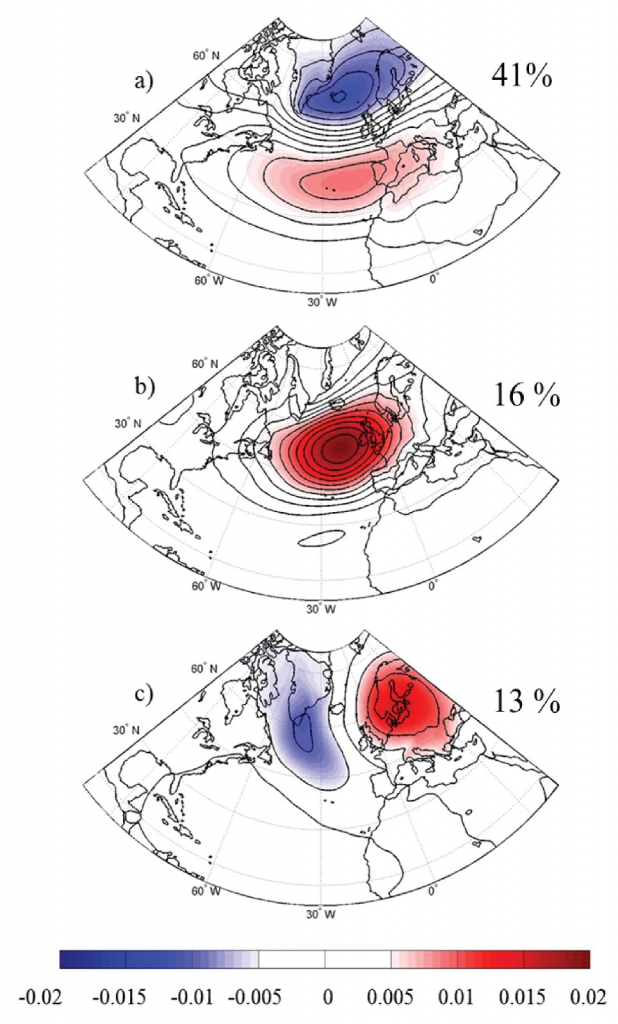 Figure 2: Maps showing MSLP anomalies for the NAO (a), the EA (b) and the SCA (c) patterns. Percentages indicate the amount of variability in MSLP that each pattern explains. (Plot from Zubiate et al., (2017), obtained statistically using ERA-Interim MSLP)

The NAO index for the month of December 2010 was close to -6 (see the NCAR monthly NAO archive); such large negative values occur rarely. During this time, exceptionally cold weather and heavy snowfall was recorded in Ireland, making it the coldest December on record almost everywhere in the country. During a negative NAO episode cold polar air can be steered towards Ireland. In the case of December 2010 much of the snowfall resulted from showers generated over the relatively warm Irish Sea streaming in from the east. On the contrary, during the winter of 2013/2014 the NAO index was strongly positive. That winter was particularly mild with intense storms and extreme storm surges. Analysis by Matthews et al. published in Nature classified the winter of 2013/2014 as the stormiest on record. It included the notable Storm Darwin which led to considerable damage in the midlands and southwest.

The NAO accounts for the largest proportion of MSLP variability in the North Atlantic region (~40%). But there are at least two other patterns that contribute notably to the climate of Western Europe. These are the EA and the SCA patterns and they each account for a further 10-20% of the variability in MSLP.

The East Atlantic pattern, in its positive phase, has a centre of positive MSLP anomalies over the eastern North Atlantic, roughly between the two centres of the NAO (See Figure 2 (b)). Its effect is noticeable on temperatures and precipitation, as well as on winds and wave heights. The EA in its positive phase is associated with lower amounts of winter precipitation in Ireland, slacker winds and therefore smaller waves. The opposite is true when the EA is in its negative phase.

The positive phase of the SCA pattern (Figure 2 (c)) has a positive pole of MSLP anomalies centered over Scandinavia. When the NAO is in a negative phase, the SCA pattern brings cold air from the east making easterly winds more frequent in Ireland as was the case in December 2010. This also has a negative impact on wave heights off the west coast of Ireland.