Met Éireann and the UK Met Office, along with new storm naming partner KNMI (the Dutch National Weather Service) have unveiled the list of names for the 2019-20 storm season.

Once a storm is named by any National Met Service globally, that name is retained if the storm moves into our waters. For example: Ophelia was named by the National Hurricane Center (USA) and Emma by IPMA (Portugal).

This summer Met Éireann and the UK Met Office received thousands of suggestions from the public following a call for people to send in ideas for future storm names. The three national met services then worked together to compile the suggested names and chose some of the most popular names along with names that reflect the three nations’ diversity. 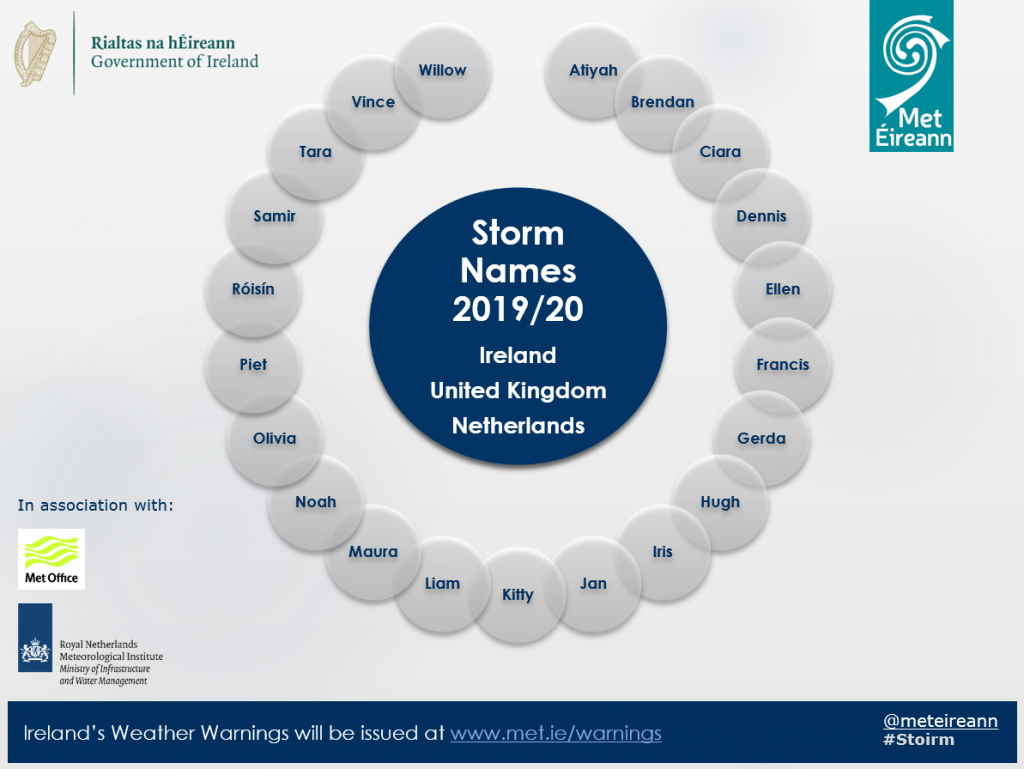 Evelyn Cusack is Head of Forecasting at Met Éireann and is also Chair of the European Storm Naming Group:
‘The naming of storms by National Met Services as well as colour coding weather warnings provides a clear, authoritative and consistent message to the public and prompts people to take action to prevent harm to themselves or to their property.’

Evelyn added: ‘We are overwhelmed with the huge response to our public call for storm names and please don’t be too disappointed if your name hasn’t been used as you will get another chance next year.’

Gerard van der Steenhoven, Director General at Royal Netherlands Meteorological Institute (KNMI):
“We are looking forward to intensifying our collaboration with the UK Met Office and Met Éireann on storm forecasting. As storms are not confined to national borders, it makes a lot of sense to give common names to such extreme weather events. As many people are traveling – sometimes on a daily basis – between our countries, the use of common names will make it a lot easier for them to appreciate the hazards represented by a large storm system. For us at KNMI, it is a great privilege and advantage to work – from now on – in close co-operation with our colleagues from Ireland and the UK in the communication about storms.”

Eoin Moran, Director of Met Éireann:
“Met Éireann is delighted to collaborate with our colleagues in the UK Met Office and KNMI in this storm naming initiative.”

Derrick Ryall, Associate Director of Public Weather Service at the Met Office said:
“In addition to Met Office weather warnings, the storm naming scheme has been proved to raise awareness of severe weather in the UK, providing a consistent message to the public and crucially helping people to make better decisions so they can stay safe and thrive.”