Today is the one-year anniversary of Storm Ophelia. The following is a report detailing this significant weather event: Ophelia.

Hurricanes and tropical storms that form in the tropical Atlantic, usually from August to October, which is the peak of the Atlantic hurricane season, are occasionally picked up by the North Atlantic jet stream and swept north-eastwards towards Europe. By the time they reach Ireland, they are usually no longer classified as hurricanes, having transitioned into what are known as post or extra-tropical storms but can be quite powerful and damaging. Extra-Tropical Storm Ophelia (also known as Storm Ophelia) was not the only tropical system to affect Ireland in the 2017-2018 windstorm season. The remnants of Hurricane Gert and Nate had already brought heavy rainfall and flooding to some parts of Ireland in August and October but little in the way of wind.

Ophelia is the farthest east Major Hurricane (Category 3 or higher) on record in the Atlantic Basin. It made landfall over Ireland as an extra-tropical storm on the morning of  the 16th October 2017 resulting in observed wind speeds of up to 156 km/h, in a (3-second mean) gust, at Roche’s Point station, County Cork.

A nationwide Severe Weather Warning (see www.met.ie for criteria) was issued by Met Éireann, such a warning is only used in circumstances where the weather conditions are deemed severe enough to endanger life.  A ‘Status Red – Severe Weather Warning – Take Action’ implies that recipients take action to protect themselves and their properties. 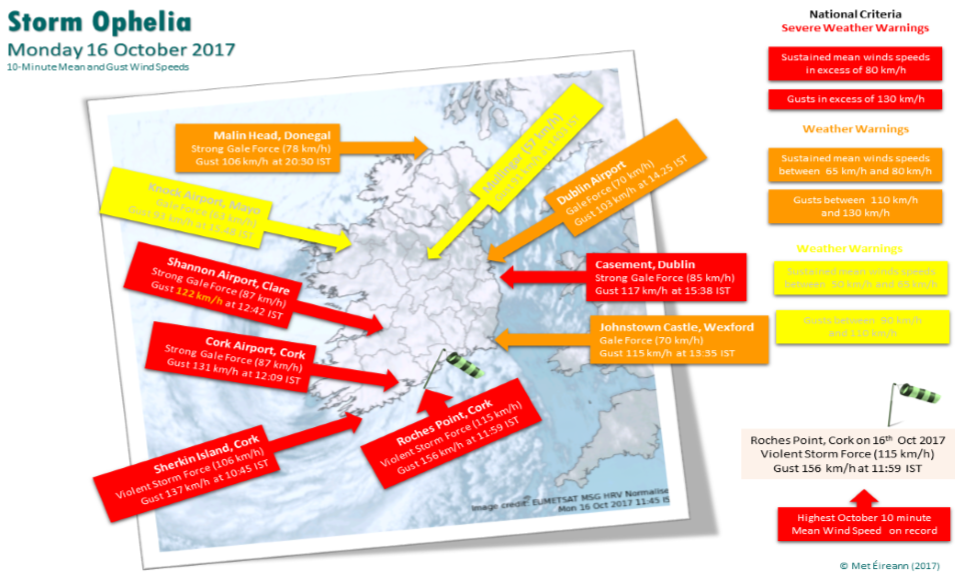 Some of the recorded winds during Storm Ophelia on the 16th of October 2017, including what they would correspond to on Met Éireann’s colour-coded warning system.

The storm caused major power outages, lifted roofs, felled countless trees and caused coastal flooding in Ireland. The tragic loss of three lives was also attributed to Storm Ophelia. All schools and many businesses closed for the day while the nation weathered out the storm.

This report contains an analysis of wind data observed during Storm Ophelia, it also describes its development and path over Ireland, as well as providing an account of the weather forecasts and warnings issued.