Storm Dennis (as named by the UK Met Office), is currently undergoing rapid cyclogenesis in the western Atlantic. While staying to the northwest of Ireland, Storm Dennis will produce some wet and windy weather over Ireland this weekend.

The strength of the jet stream is determined by the temperature gradient closer to the surface. We call the zone where warm and cold air meet the baroclinic zone (a strong temperature gradient that separates warmer air from colder air and often the battle field that spans our storms).

The ongoing battle between warm air over the south central Atlantic and a cold pool over much of eastern Canada has led to a strong level baroclinic zone fuelling a powerful jet aloft with several waves tracking across the Atlantic. The lead wave has been the driving force for this first deep low (~933 hPa) currently tracking in a northwesterly direction and occluding south of Iceland.

Warm air being pushed up along the US east coast meeting very cold air over Eastern Canada is the driving force for this powerful jet, with winds up to 225 knots (~416 km/h) at its core, currently aiding the rapid development of Storm Dennis. Dennis will develop rapidly today. Rapid cyclogenesis is defined as a drop in pressure of greater than 24 hPa in 24 hours. This storm is forecast to drop by around 70 hPa in 24 hours as it rapidly tracks north towards Iceland. With a forecast central pressure in the low 9-teens it will rival the lowest recorded pressure in the north Atlantic of 914 hPa, which occurred off the coast of Scotland on Monday 11th January 1993. The core of Storm Dennis is expected to stay well to our northwest as it rapidly strengthens, before pirouetting (the Fujiwhara effect) around Friday’s low and coming back to visit us on Sunday as it slowly weakens. 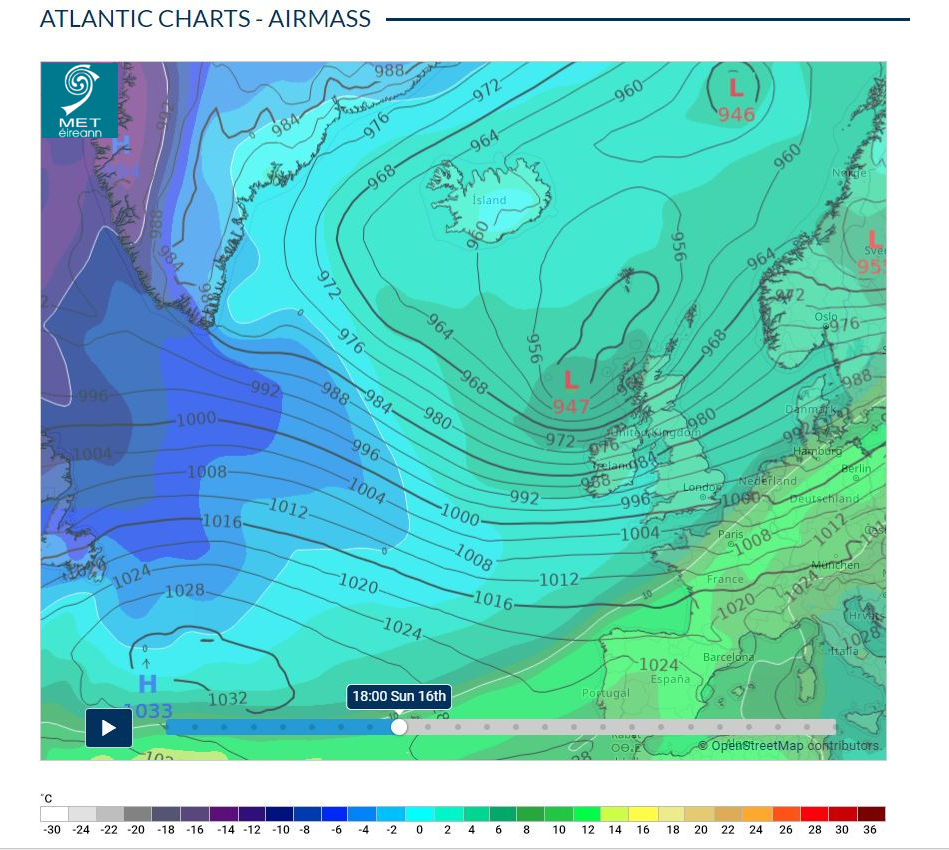 For the latest warnings see: www.met.ie/warnings

Saturday: The first round of wet and windy weather will reach the Atlantic coast on Saturday morning spreading countrywide during the morning easing later and Status Yellow wind and rain warnings are in operation.

Sunday: The core of storm Dennis (actually a hybrid of Friday’s low and Storm Dennis) will gradually fill and weaken as it tracks south-eastward towards Ireland bringing squally showers with a risk of thunder. A widespread status Yellow wind warning is likely to be issued and possibly Orange level winds locally (especially in the vicinity of squally showers along Atlantic coasts) can be expected.

Monday: Winds will gradually ease through Monday, but not dissimilar to this past Monday showery conditions can be expected with wintry conditions possible. 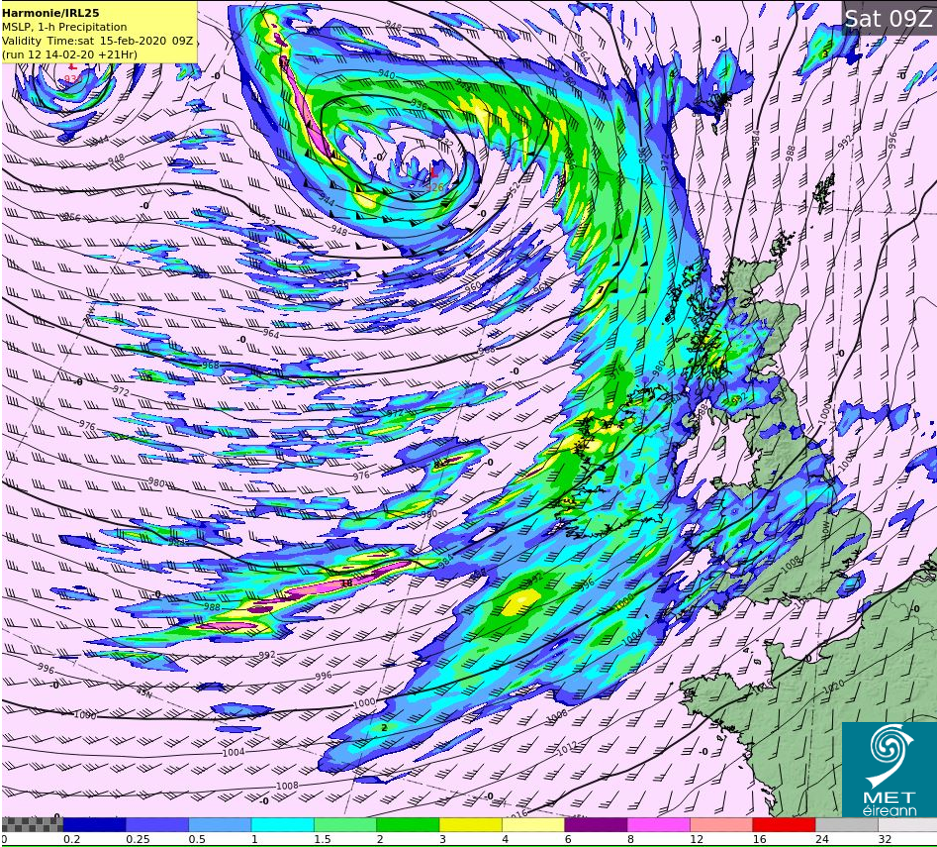 A) Elevated river levels
Currently river levels are elevated across the country, particularly in the midlands, west and south, so any heavy rainfall would cause issues

B) Coastal Flooding
We are entering into a period of transition between Spring (High) Tides and Neap (Low) Tides. This means there will not be a large variation between high and low tides. The combination of high seas and strong winds or stormy conditions, may increase the possibility of coastal flooding especially along western and southern coasts Saturday and Sunday coinciding with high tides. 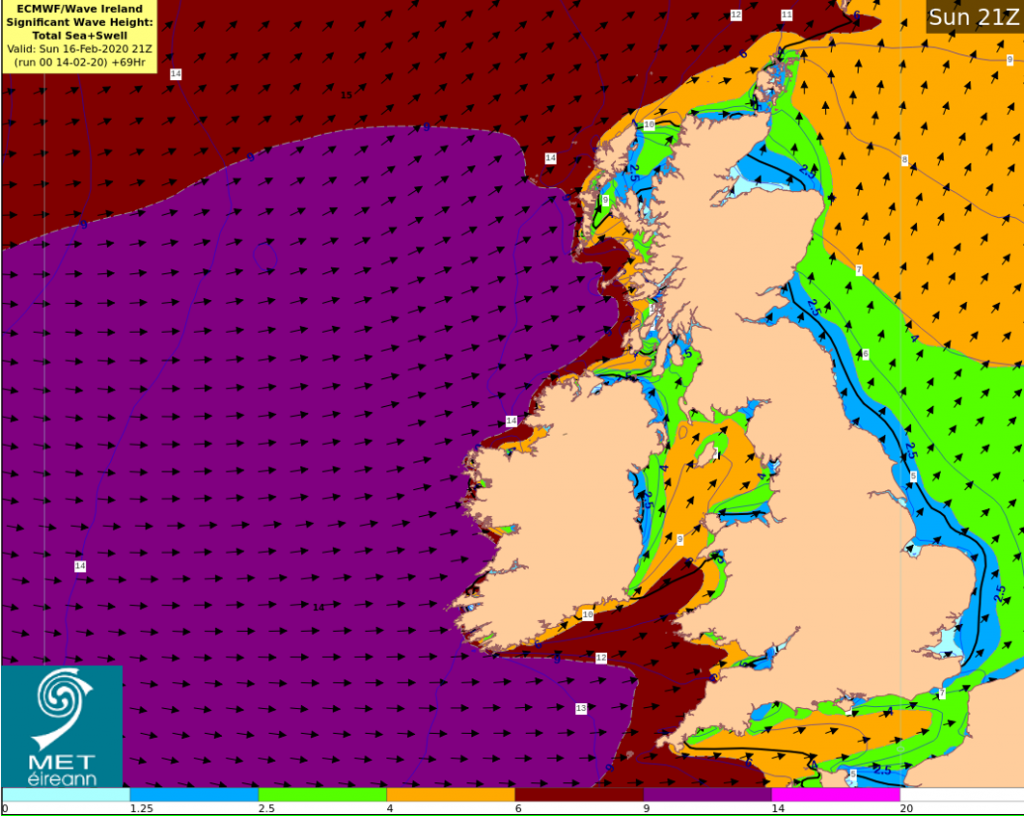 During the storm called the ‘Night of the Big Wind’, barometric pressure was estimated to be as low as 918 hPa on 6 January 1839. It was the worst storm to affect Ireland for 300 years. It is also considered to have one of the lowest core pressures ever been recorded near the Irish isles.

“The two lowest barometric readings recorded in the Atlantic Ocean have occurred in the eighties and nineties of the 20th century. The first was the Atlantic Cyclone of 15 December 1986, which deepened to 916 hPa, and the other was the storm of 10-11 January 1993 which is much better documented. According to Gulev et al. (2001), Northern Hemisphere winter cyclones have intensified and produced deeper central mean sea level pressures in recent decades. However, these winter cyclones also appear to have shorter life cycles and dissipate more quickly.”

Deep Atlantic lows, of course, may not come close to Ireland. The five lowest mean sea level pressure (MSLP) observations in the National Climate Archive are:

Storm Dennis is forecast to track to the north of Ireland and the UK over the weekend. It will likely bring periods of very wet and windy weather, with some stormy conditions possible, particularly later Sunday into Monday.

Cold air is forecast to exit Canada and enter the North Atlantic Ocean over the next few days, creating a sharp temperature gradient in the atmosphere. This will result in an intensification of the jet stream, shown in the graphics below, which will direct low pressure systems towards Ireland. 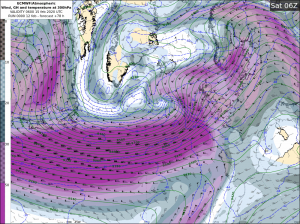 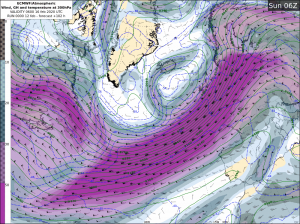 Gales are likely in coastal areas on Saturday with fresh to strong winds inland. Winds could increase further on Sunday, possibly becoming stormy, particularly along western coasts. It will be very gusty too over the weekend, with some damaging gusts possible.

We are entering into a period of transition between Spring (High) Tides and Neap (Low) Tides. This means there will not be a large variation between high and low tides. The combination of high seas and strong winds or perhaps stormy conditions, may increase the possibility of coastal flooding especially along western and southern coasts due to wave transformation.

Storm Dennis may also bring very wet conditions with localised flooding possible. River levels are elevated across much of the midlands so any heavy rainfall would cause issues here.

Storm Dennis is the fourth named storm of the season. The naming convention now also includes the Dutch meteorological service, KNMI as well as our existing partner UKMO. Storms are named to aid the communication of approaching severe weather, helping the public to be better placed to keep themselves, their property and businesses safe.

Push notifications for all weather warning levels (yellow, orange and red) for your location are available on the latest version of the Met Éireann App. Alternatively, you can also sign up to receive emails/SMS (red only) of weather warnings on our warning page. Both services are outlined here.