Department of Agriculture, Food and the Marine’s 2022 Nematodirus Forecast

Taken from the Department of Agriculture, Food and the Marine (DAFM) Press Release on gov.ie

Each spring, the Department of Agriculture, Food and the Marine (DAFM), in collaboration with Met Éireann, UCD and Teagasc, advises farmers of the predicted risk of disease, chiefly in lambs, caused by the roundworm Nematodirus battus.

Nematodirosis is a severe parasitic disease of lambs 6 to 12 weeks of age which become infected by ingesting large numbers of infective larvae from grazing on contaminated pasture. The life cycle of N. battus, is unlike that of other roundworms in that eggs deposited on pasture do not hatch until the following year to release the infective larvae. This happens during a mass hatching event in spring when soil temperatures increase after a period of cold weather. Disease typically occurs in April, May and June.

After ingestion by lambs, Nematodirus larvae invade the wall of the intestine. Infection is characterised by profuse diarrhoea, dehydration and weight loss. In outbreak scenarios, lambs can be seen congregating around water troughs due to the severe thirst that develops. Adult sheep are unaffected by the parasite.

This disease is best prevented by keeping the current year’s lambs off any pasture that was grazed by lambs or young calves (which can be carriers of infection) in the previous year. Farms with high stocking rates are particularly vulnerable. Twin lambs, or single lambs born to ewes of poor milking ability may be at a greater risk of developing disease as they begin consuming greater amounts of grass earlier in life. If clean, ungrazed pasture is available, preference should be given to moving these lambs first.

When disease is predicted to occur this year

The maximum Nematodirus egg hatching this year is expected to peak between 6 and 18 April which is close to the normal period for egg hatching, due to the March 2022 average values being close to the long-term average of soil temperatures.

The majority of the country will see maximum egg hatching around the second and third weeks of April with the exception of the coastal fringes along the south, west and northwest coast which will be earlier with the peak in egg hatching expected at the end of March and in the early days of April.

Please see the map below (Figure 1) for expected timing of peaks in Nematodirus egg hatching on pasture.

When lambs should be treated

At-risk lambs (that is, typically 6 to 12 weeks of age and grazing on contaminated pasture) should be treated approximately 2 weeks after the peak of Nematodirus egg hatching.

However, consideration should be given to dosing lambs earlier on individual farms where clinical signs consistent with Nematodirus are observed, as the above treatment guidelines are based on estimated peak hatching of eggs. 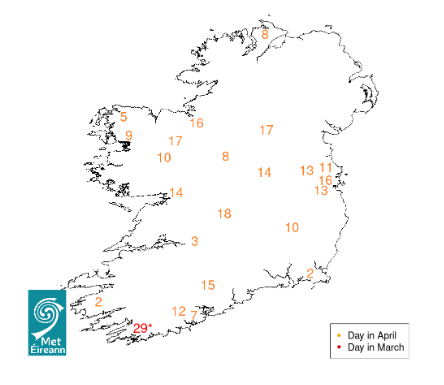 What wormer should be used

Benzimidazoles (white drenches) are the treatment of choice for Nematodirus infections and are effective against both larval and adult stages. The use of this anthelmintic class as the first-choice treatment option will also help to reduce the exposure of other worms such as Trichostrongylus and Teladorsagia to other anthelmintic classes (for example, macrocyclic lactones) at a point in the grazing season when treatment for these may not be necessary. This will help to sustain the effectiveness of these drugs and is particularly important on farms with pre-existing issues of benzimidazole resistance in populations of the common stomach/intestinal roundworms.

There are no drenches with effective residual activity against Nematodirus. This means that as lambs continue to graze, they can become re-infected with larvae, and as a result may require repeated treatments with the same or similar wormers at 2 to 3 week intervals throughout the spring.

Nematodirus and coccidiosis in lambs

It is also important to stress that other parasites can also cause diarrhoea in young lambs which require different control measures and medication. Nematodirus can be wrongly assumed to be the cause of severe diarrhoea in lambs when in fact the cause is a coccidial infection. Rotation of pasture and frequent movement of feeding troughs and watering points to drier areas will help prevent coccidiosis in young lambs as localised poaching creates moist conditions suitable for the spread of coccidia. Raising feeding troughs will also help to reduce the contamination of feed with faeces and hence transmission of coccidiosis. In some cases, nematodirosis and coccidiosis can occur together, giving rise to severe disease.

It is advisable to consult a private veterinary practitioner for an accurate diagnosis and advice on appropriate medication when lambs with severe diarrhoea and straining are observed. This is especially the case where there has been little or no improvement from an initial worming treatment. As both nematodirosis and coccidiosis can occur at the same time, treatment may need to be directed against both pathogens.

It is recommended that any lambs that die unexpectedly are referred to a private veterinary practitioner to a regional veterinary laboratory for post-mortem examination as N. battus can cause death before clinical signs become apparent.

The pathogenic effects of this parasite are caused by the larval stages. Therefore, faecal egg counts alone do not provide a reliable basis for deciding on when to treat lambs.