Mild overall, dry in the South and East

High pressure that built over Ireland from the south at the end of February continued to dominate through the first week of March. This brought a mixture of some dull days with low cloud along with some brighter days with sunny spells. It stayed mostly dry overall, but cool with frost and fog in many places at night. The high pressure moved away to the south at the beginning of the second week, allowing Atlantic weather fronts to encroach from the west. A westerly airflow with low pressure to the north took control for the rest of the second week. This brought bands of rain and showers across the country on most days up to the 14th, with thundery falls in places. High pressure, which built from the south again at the beginning of the third week, brought milder weather and kept it mostly dry up to the 22nd. During the fourth week, pressure stayed relatively high, but low pressure to the north brought several weather fronts and showers across the country from the west, with the bulk of the rain falling in the western half of the country. There was a brief cold intrusion from the northwest on Friday the 26th, where some of the showers turned wintry. The month finished mild overall and mostly dry in the South and East, however slow moving weather fronts continued to bring pulses rain to the West and North.

Sunshine: Highest in the East and Southeast

Monthly mean wind speeds ranged from 6.5 knots (12.0 km/h) at Moore Park, Co Cork to 15.1 knots (28.0 km/h) at Mace Head, Co Galway. Gales were reported on 10 days during the month with up to strong gale winds reported on the 9th, 10th, 11th and 12th. The number of days with gales ranged from zero days at a few stations to 7 days at Mace Head, Co Galway. The number of days with up to strong gales ranged from zero at a most stations to 3 days at Sherkin Island, Co Cork, 2 days at Roches Point, Co Cork and 1 day at both Belmullet, Co Mayo and Mace Head, Co Galway. Both the month’s highest gust and 10-minute mean wind speed was reported at Sherkin Island, Co Cork. The highest gust was on Friday 12th with 68 knots (126 km/h) while the month’s highest 10-minute mean wind speed was 45 knots (83 km/h) on Wednesday 10th. 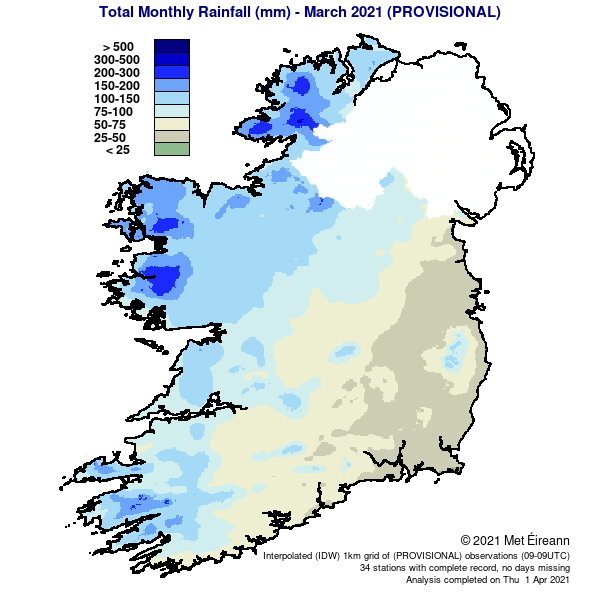 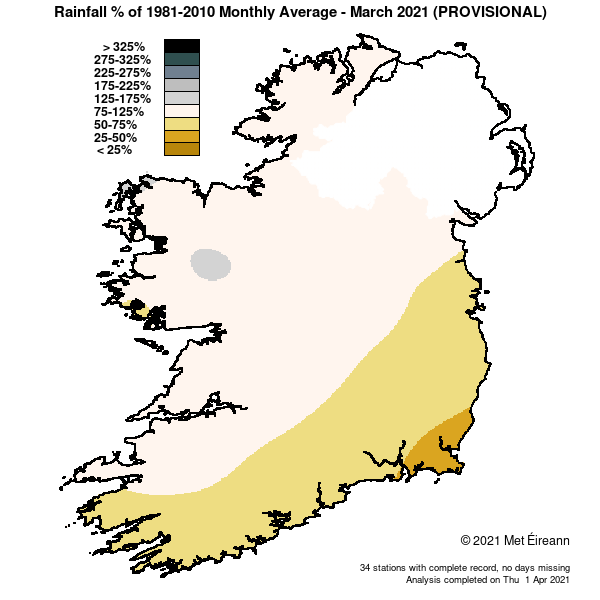