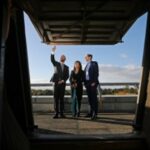 On the 27th October 2022; Minister for Further and Higher Education, Innovation and Science, Simon Harris TD, joined Professor Philip Nolan, Director General of Science Foundation Ireland (SFI), visited Met Éireann to launch Science Week 2022.  A national celebration of science, with hundreds of both in person and virtual events taking place throughout the country, running from the 13th until 20th November, Science Week will engage the Irish public on the theme of Infinite Possibilities.

Met Éireann, as the authoritative voice of meteorology in Ireland and as leaders in Science communication are taking part in a  number of events in support of Science Week, to encourage people to embrace Science and discover what it can offer us in our every-day life.

Met Éireann’s Head of Forecasting Evelyn Cusack gives a talk to the Cork Geography Teachers Association on Saturday 12th November and will also attend the National Archaeological Conference in Dun Laoghaire on the 20th of November.

Gerry Murphy gave a talk at Dundalk Library on 10th November as part of the Louth Science Festival.

Columba Creamer is hosting an exhibition at the National Archaeological Conference in Dun Laoghaire along with our Marine Meteorologist Meadbh Nic Guídhir on the 19th and 20th November.

Linda Hughes gives a talk at Mount Mercy Secondary School on the 18th of November and is working at the National Archaeological Conference in Dun Laoghaire on the 20th of November.

Check out Met Éireann’s Education recourses, videos on our YouTube channel and a range of information articles on topics such as careers in meteorology,  automatic weather stations and crowd-sourced weather observations, online weather courses and blogs, podcasts, meteorological societies and International Meteorological Organisations.