Valentia has been undertaking Air and Rain pollution monitoring since the 1970s and radioactive monitoring from 1956. The Observatory is part of the WMO Global Atmospheric Watch (WMO-GAW) and the European Monitoring and Evaluation Programme (EMEP) under the UNECE Convention of Long Range Transboundary Air Pollution.

Gamma Dose Rate provides a measure of the amount of energy a body receives from the surrounding gamma radiation. Gamma-radiation is a form ionizing radiation, and is thus biologically hazardous. This radiation is always present and occurs naturally and it is produced primarily by four different nuclear reactions: fusion, fission, alpha decay and gamma decay.

If a radioactive ‘cloud’ reaches Ireland, these gamma detectors will detect the associated elevated radiation levels and an alarm will be triggered. Rain washes the radon progeny out of the air. So when it rains, there should generally be a short spike in the gamma counts followed by a period of lower counts. Our data can be viewed at EPA (Environmental Protection Agency).

Air radiation monitoring A precisely measured volume of air is pumped through the filter which collects particulates. After a sampling period of one week the filters are removed and sent to the EPA. A laboratory analysed by gamma spectroscopy is performed.

If elevated radiation levels are caused by any other means than radon washout, the rainwater is analysed for the type and amount of radioactivity. 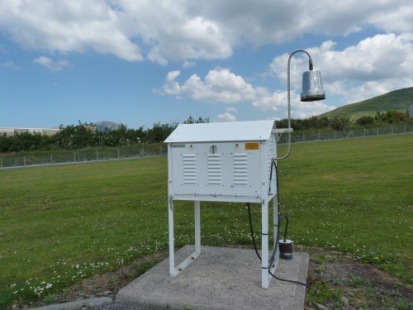 A weekly bulk collector and a monthly bottle collector are used to collect the rainwater. The samples are then analysed in order to determine the concentrations of radionuclides present. 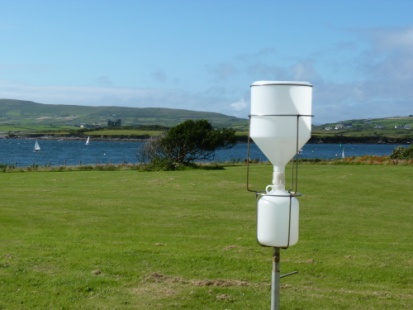