The forecast office operates 24/7 every day of the year. When a forecaster comes on duty they firstly receive a briefing on the weather from their colleague regarding the current situation, the forecast, any warnings in operation or that will be needed to be issued shortly and any other caveats to watch out for. The forecaster then uses a selection of hard copy charts, computer model data along with radar and satellite images and animated loops to produce the forecast. 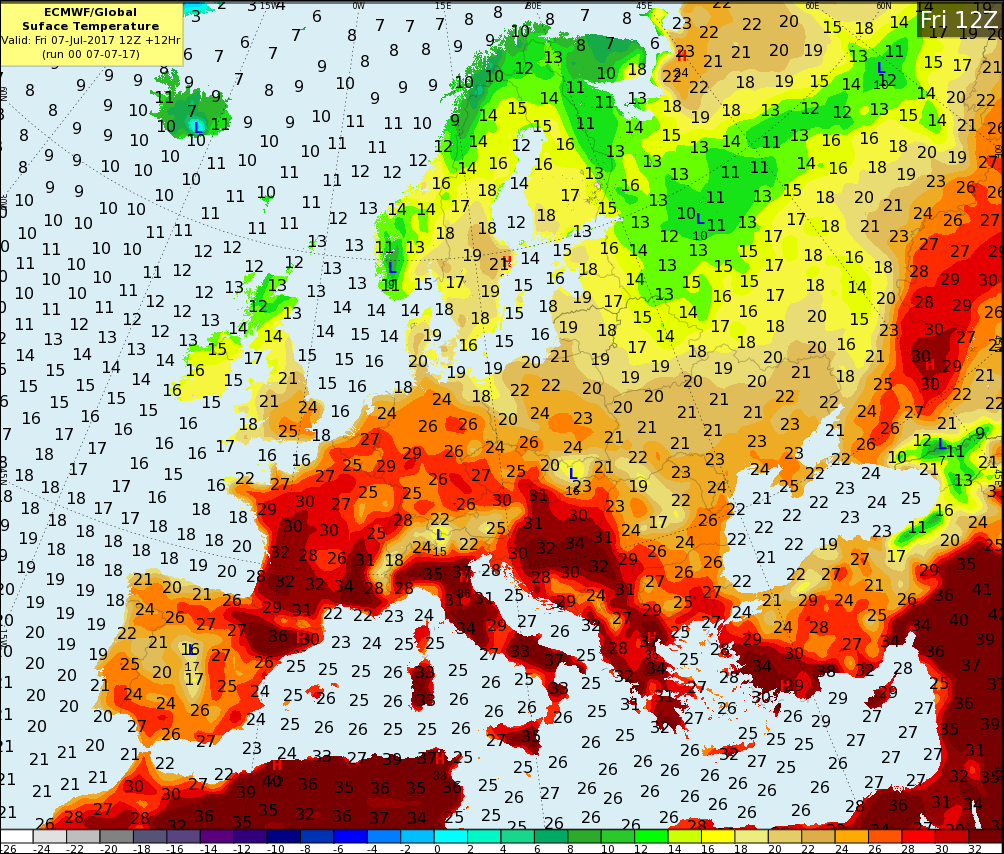 Experience tells the meteorologist which model works better in different situations. Computer models have improved vastly in recent years but they are not always correct, for example sometimes the satellite may pick up a developing system in the Atlantic that is below the resolution of the computer model. Most forecasters also still hand draw some charts to focus in on what the observations are telling us, and the forecast is constantly monitored and updated throughout the day.

The computer model data is made available via the IBL visual weather system workstation which is tailored to the daily needs of the forecaster and gives access to all the different weather parameters at various levels in the atmosphere that the forecaster on duty might require.

The communication of the forecast to the public takes several forms, scripts are sent to RTE radio and television, local radio stations countrywide, selected newspapers with graphics also sent to RTE television. The sea area forecast is produced 4 times a day/night. The Inland Lakes forecast is produced twice daily. The forecaster on duty broadcasts live on RTE radio 1 from ‘The Radio Room’ in the office just before 6pm on 5-7 live, five minutes to midnight, after the 6am morning news and just before 8am in the morning and currently in the Ronan Collins show at around 12:50 pm.

During the winter season a “Road-ice forecast” is issued everyday to the local authorities countrywide about expected icy conditions (or not) during the night ahead and the prospects for 5 days in advance. This helps the local authorities along with thermal mapping to decide whether they will need to grit, or monitor the road temperatures through the night in a borderline situation, or not to grit. It allows them to estimate how much salt they may need in the near future, or if they need snow ploughs on the go. 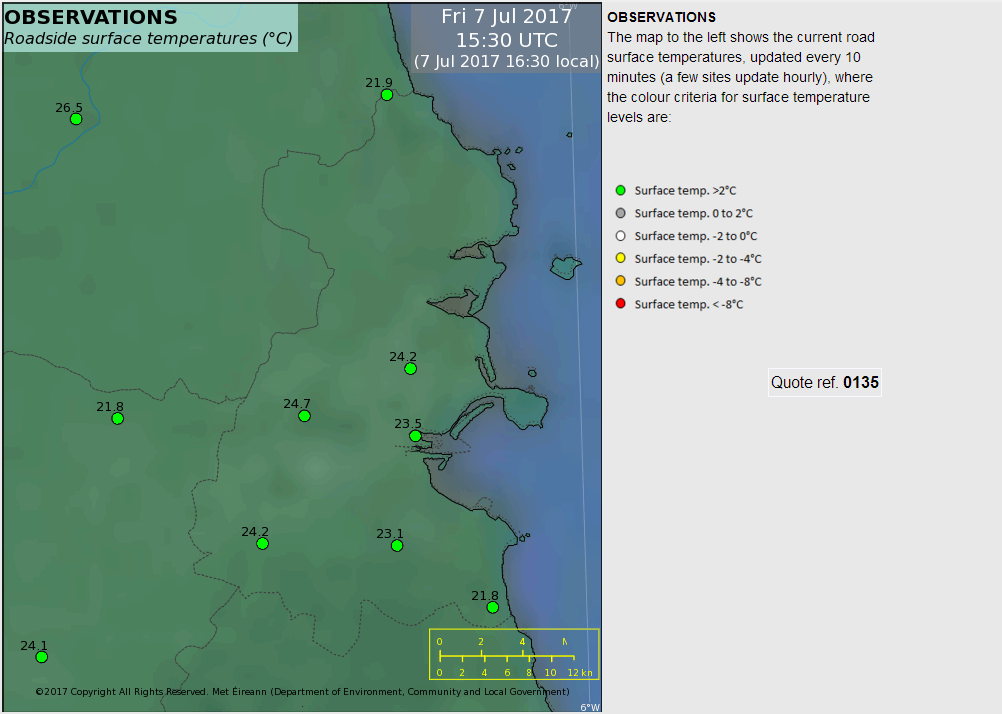 Other customers who receive written specialised forecasts include the ESB, The Farmers Journal, Amazon, and Teagasc. Some customers such as the racecourses, pigeon racers and local farmers or organizers of outdoor events prefer to chat directly to the forecaster on duty for advice.

If a severe weather warning is required they are colour coded yellow, orange, red or storm-named depending how severe the weather is expected to be. As well as going to the general public and media, these warnings are disseminated to local authorities and emergency services to take precautions such as closing bridges in high winds, evacuating buildings in flood prone areas if the rivers are high and heavy rain fall is expected.
In times of adverse weather the forecaster spends a lot of time talking on the phone to customers, newspapers, local authorities giving updates on the situation, and also doing radio and sometimes TV interviews on the event in question.

As with General Forecasting, the Aviation Forecast desk operates 24/7; it is staffed every day and night of the year, providing weather forecasts and warnings to aircraft flying in Irish airspace and to the Irish airports. Met Éireann is the only organisation in Ireland that is certified to issue such aviation forecast products with an overall objective of ensuring the safety and efficiency of aviation in Irish airspace.

The International Civil Aviation Organisation (ICAO) has specific standards and regulations that Met Éireann must follow when producing and issuing forecasts and warnings for aviation. Meteorologists produce particular forecasts called Terminal Aviation Forecasts (TAFs) for all of the major airports in Ireland, and also for a number of regional airports. Shannon, Dublin, Knock (Ireland West) and Cork International Airports are provided with 24 hour TAFs updated four times a day. A short-term forecast focused on landing conditions, called a TREND, is also issued every thirty minutes for each of these airports, giving a statement of significant changes in weather expected over the following two hours. TAFs are also provided to Sligo, Donegal, Kerry, Waterford and Casement Aerodrome at regular intervals; these have a shorter focus of 9 hours ahead. The information provided in a TAF includes wind speed and direction, precipitation type, visibility, cloud amount and cloud height.

Local warnings are issued for aerodromes when weather conditions that have the potential to affect operations, such as strong winds, thunderstorms, frost or snow, are likely. Aviation forecasters also provide extended forecasts for Dublin Airport that extend out to 4 or 5 days and highlight the risks of fog, heavy rain, cross winds, snow and ice, enabling the airport and airline operations to plan accordingly.

Example of a Terminal Aerodrome Forecast (TAF) for Shannon Airport

Met Éireann also issues warnings for significant meteorological phenomena that might be encountered in-flight within Irish airspace. These warnings are called SIGMETs and indicate the presence or forecast the likelihood of hazards to aviation such as severe turbulence, severe icing, thunderstorms, severe mountain waves and volcanic ash. Aviation forecasters provide specialised forecasts, both written and verbal, for Search and Rescue, Air Corps and give verbal briefings to General Aviation pilots and balloon operators if required.

Example of a SIGMET issued for thunderstorms 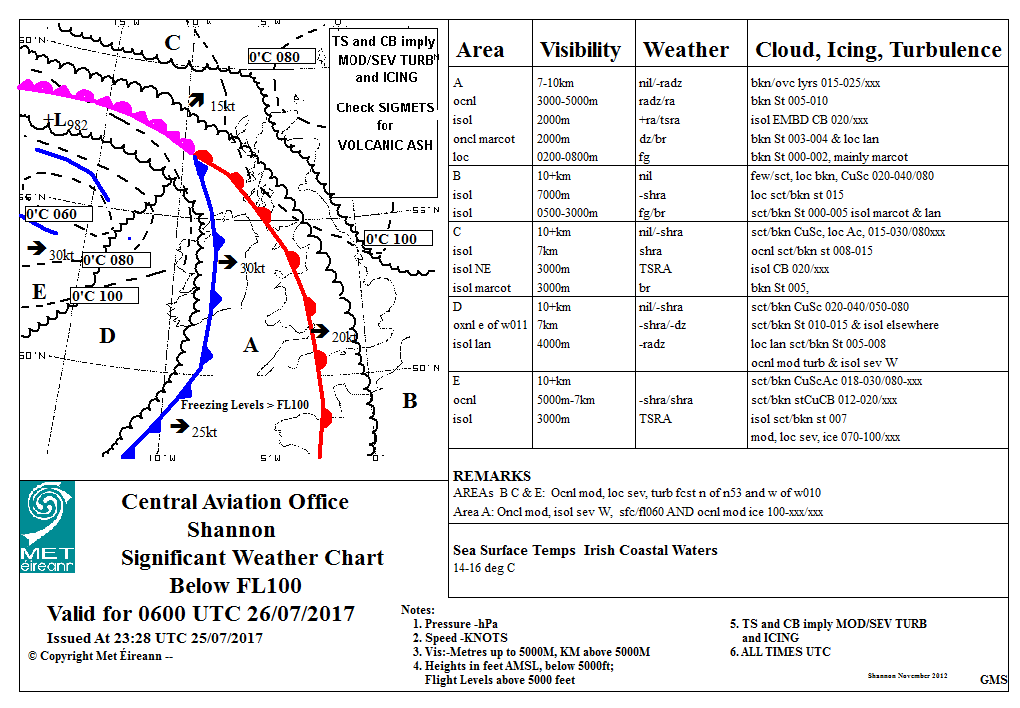 Every 6 hours, meteorologists will also issue a Low Level Significant Weather Chart. The product extends up to 10,000ft and includes a graphic on which Ireland, the UK and surrounding areas are divided into areas based on the expected weather.
Text is then used to describe the weather in each area in detail, including weather type, visibility, cloud amounts and height as well as highlighting the risk of icing and turbulence.

Met Éireann receives data from geostationary and polar orbiting satellites. A geostationary satellite orbits the earth directly over the equator and this means it stays in a fixed position relative to the Earth’s surface, around 36000km high up. There are different channels of satellite available such as visible, infra-red and water vapour. 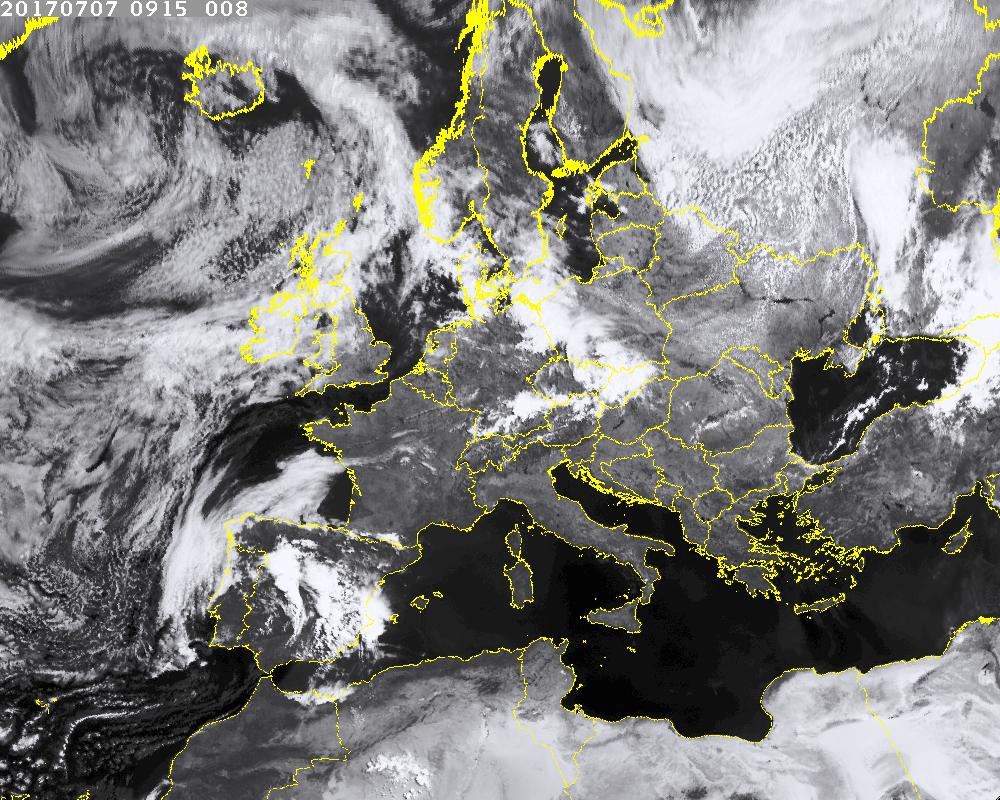 The visible satellite image measures the sunlight reflected by the Earth’s surface and clouds. Clouds and snow reflect a lot of light and are bright; the oceans absorb almost all incoming light and are dark; thin or low clouds and land have variable reflectivity or albedos, and are varying shades of grey. The infra red satellite image measures the temperature or radiance of the ground and clouds. Light shades represent low temperatures and dark shades high temperatures. Water vapour imagery is used to analyse the presence and movement of water vapour moisture in the upper and middle levels of the atmosphere. 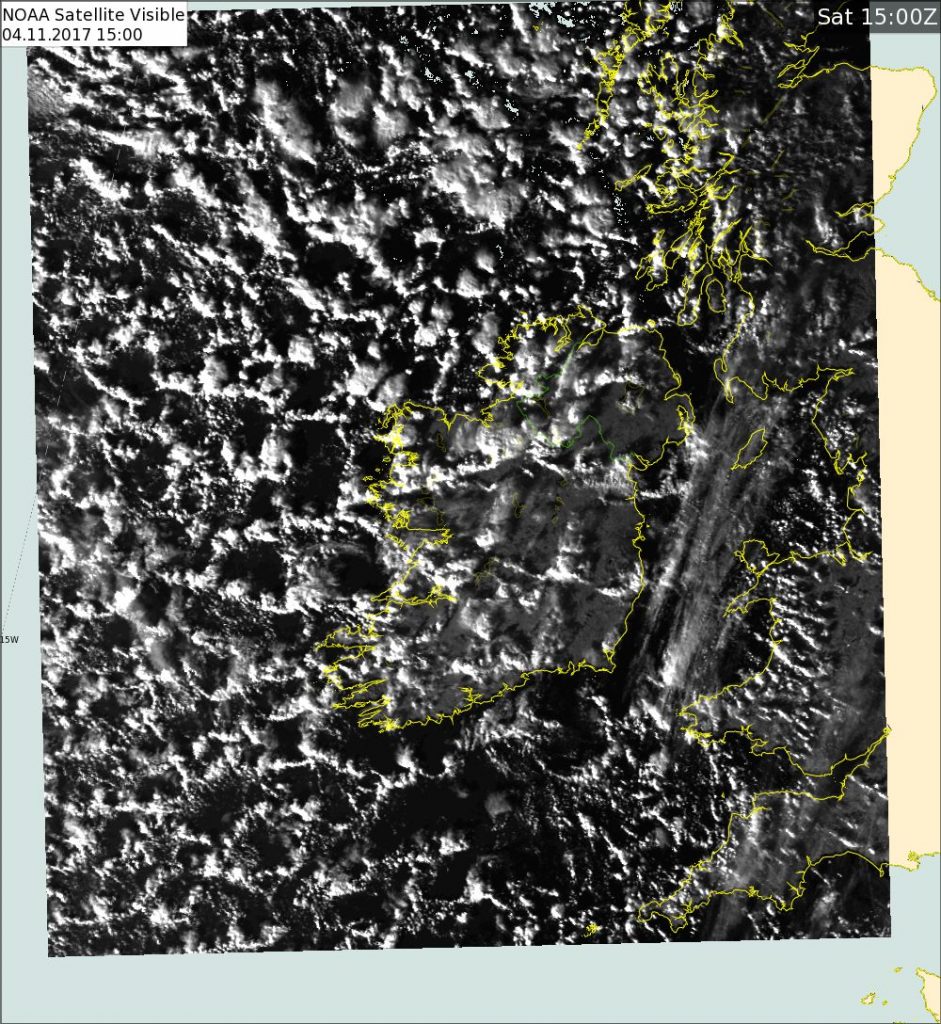 A polar orbiting satellite is one in which a satellite passes above or nearly above both poles of the earth being orbited on each revolution. It therefore has an inclination of (or very close to) 90 degrees to the equator and scans different parts of the earth. The orbit is much lower than for the geostationary satellites, between 700 and 800 km high, and as a result the data resolution is higher.
Other products can be derived from satellites to help a forecaster see what type of cloud or even fog is affecting different areas. It is likely that the accuracy of these products will be improved in the future. 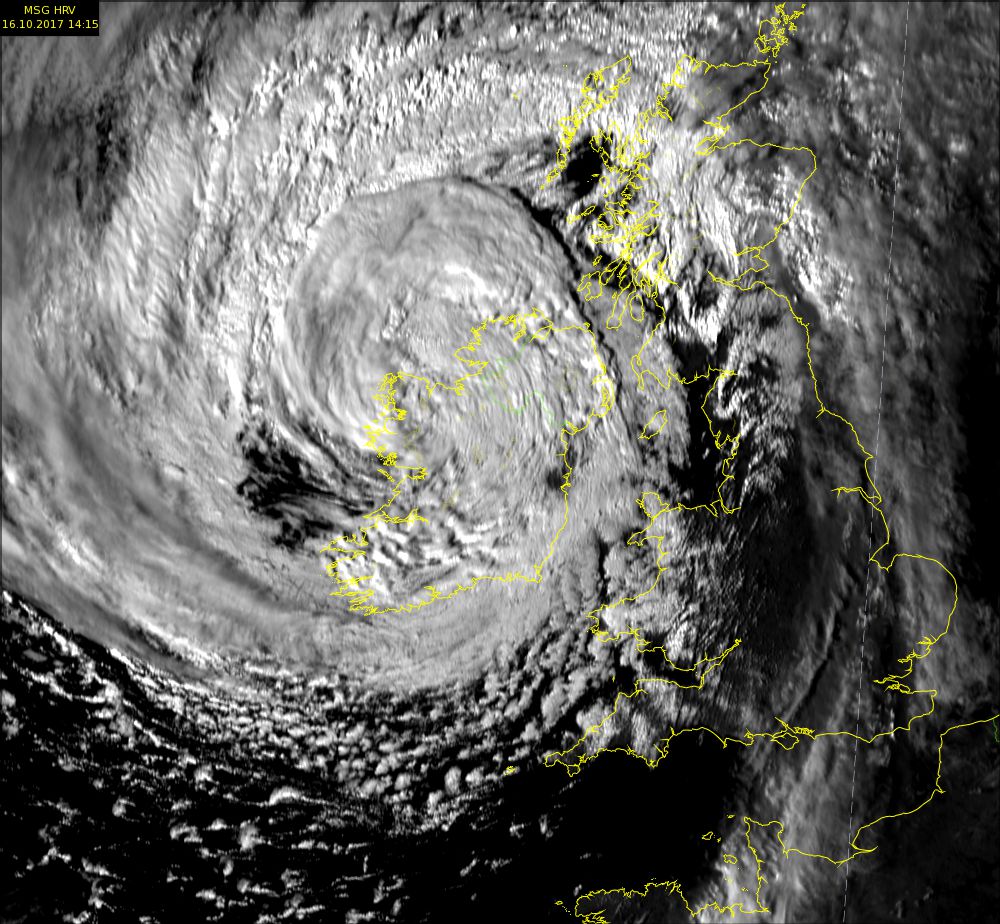 A weather radar is used to locate precipitation, calculate its motion, estimate its type (rain, snow, hail, etc.), and forecast its future position and intensity. There are currently operational radars at Dublin and Shannon Airports and also one in Belfast. 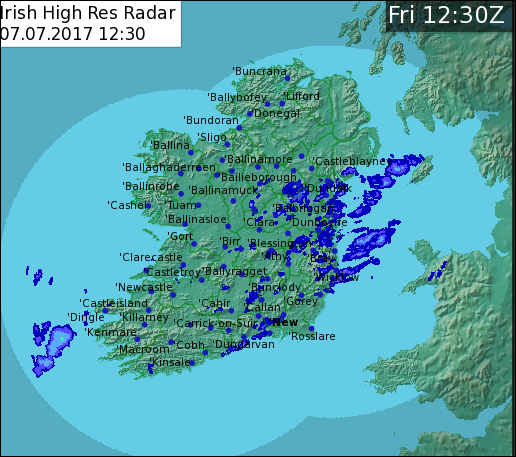 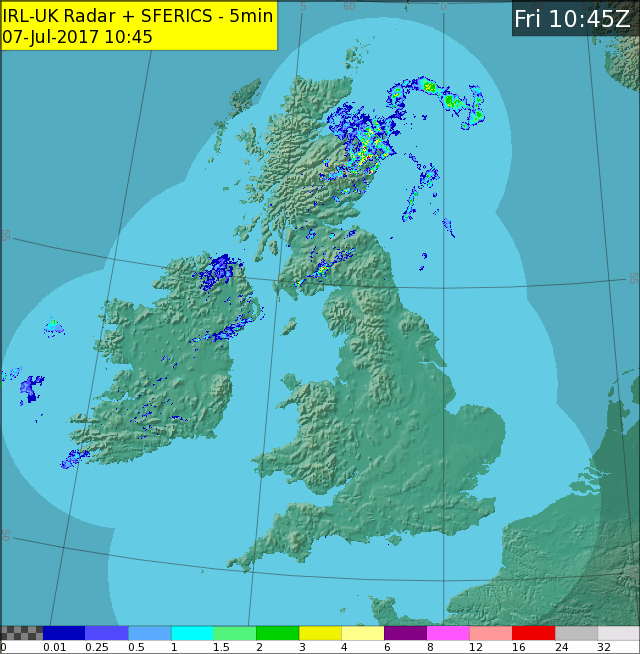 Combining radar coverage with radars in the north of Ireland and the UK gives a fuller picture. Met Éireann has the capability of animating radars which is very useful in forecasting.

Occasionally streaks can appear on Radar Imagery. These streaks are caused by interference from Radio Local Area Network (RLAN).