Ireland normally gets between 1100 and 1600 hours of sunshine each year. The sunniest months are May and June. During these months, sunshine duration averages between 5 and 6.5 hours per day over most of the country. The extreme southeast gets most sunshine, averaging over 7 hours a day in early summer. December is the dullest month, with an average daily sunshine ranging from about 1 hour in the north to almost 2 hours in the extreme southeast. Over the year as a whole, most areas get an average of between 3 1/4 and 3 3/4 hours of sunshine each day. 1887 was the sunniest summer in the 100 years from 1881 to 1980, according to measurements made at the Phoenix Park in Dublin. A more recent summer, 1980, was the dullest.

The tendency for coastal regions to record more bright sunshine than inland areas is the result of the convective development of clouds over land. This daily development of cloud is due to the vertical air currents as a result of thermal heating of the ground. Upland areas are also prone to low values of bright sunshine because of greater cloudiness especially on slopes facing the prevailing winds.

The duration of bright sunshine is measured by a Campbell-Stokes sunshine recorder. This uses a glass sphere to focus the sun’s rays to burn a trace on a curved piece of card behind it. The actual amounts of energy from the sun are measured by a more complex instrument called a solarimeter. 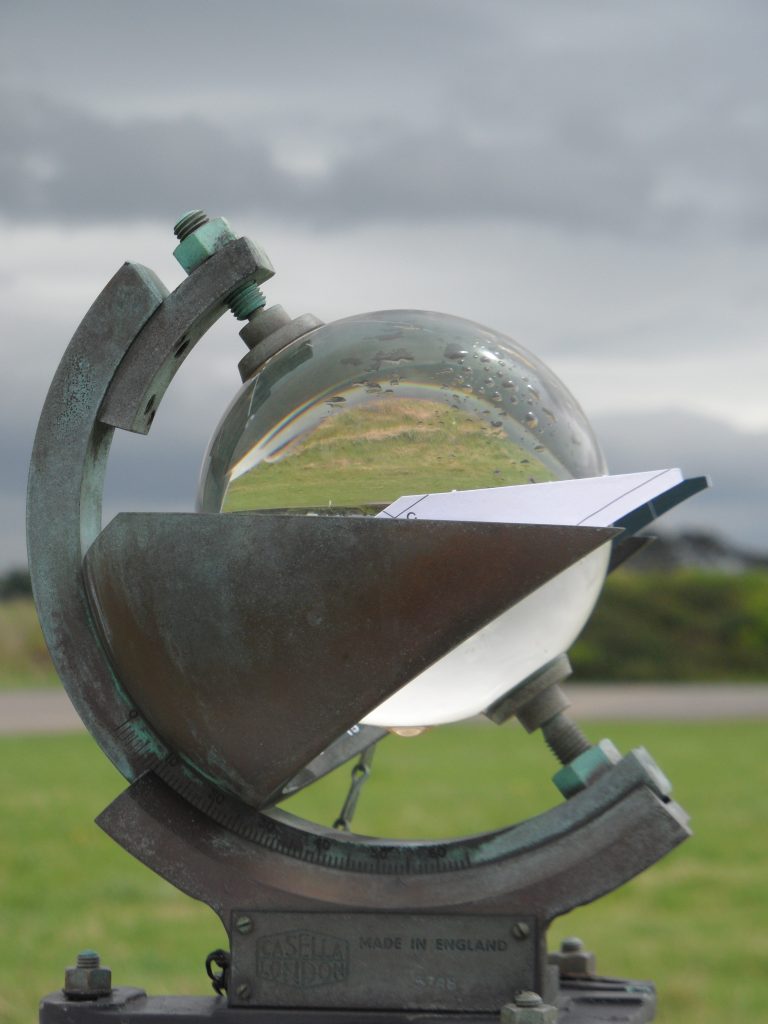 The energy arriving per unit area is expressed in joules per centimetre squared (J/cm²) and may be converted to kilowatt-hours per metre squared (kWh/m²) by using the conversion 1000 J/cm²=2.778 kWh/m². At the latitude of Birr, the solar energy received by a horizontal surface at the top of the atmosphere ranges from about 4170 J/cm² a day in late June (4187 J would raise the temperature of 1 litre of water 1°C) to less than 600 J/cm² in late December. It requires an unusually fine, sunny day with good visibility to get 75% of this incoming daily total to be received at the earth’s surface. On days with no sun, the surface receives on average 20% to 25% of the energy arriving at the top of the atmosphere. The percentage of the energy arriving at the top of the atmosphere, which reaches the surface, has a mean value of 40% to 47% during the months March to September and 30% to 37% during the months October to February.

The diffuse radiation expressed as a percentage of the total is, on average, lowest in April and highest in December. On dull days, all or nearly all of the solar radiation reaching the earth’s surface is diffuse, while on sunny days the diffuse may be less than 30% of the total radiation.

Cloud amounts are reported as the number of eights (okta) of the sky covered. Irish skies are completely covered by cloud for well over fifty percent of the time. The mean cloud amount for each hour is between five and six okta. This is due to our geographical position off the northwest of Europe, close to the path of Atlantic low pressure systems which tend to keep us in humid, cloudy airflows for much of the time. A study of mean cloud amounts at 12 stations over a 25- year period showed that the mean cloud amounts were at their minimum in April and their maximum in July. Cloud amounts were less by night than by day, with the mean minimum occurring roughly between 2100 and 0100 GMT and the mean maximum between 1000 and 1500 GMT at most stations. However, the stations on the south and southeast coasts had their maximum cloud cover in February.