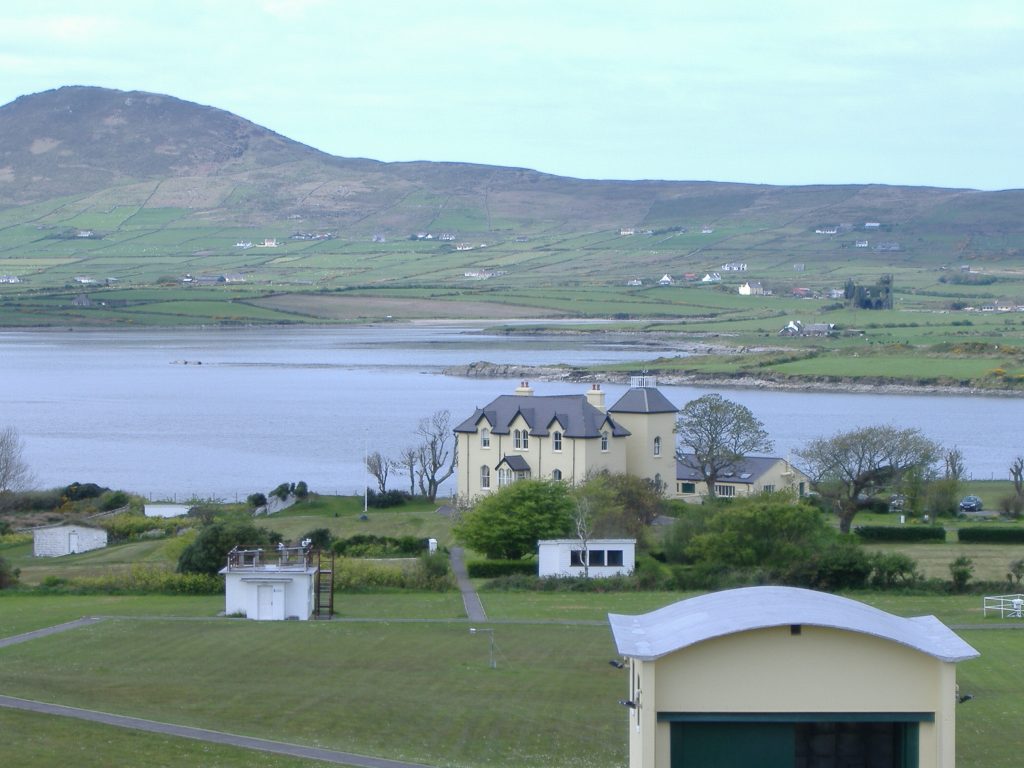 Valentia Observatory is part of Met Éireann, the Irish Meteorological Service. It is located one kilometre west of the town of Cahirciveen, on the estuary of the Feartha river. The Observatory carries out surface weather and upper-air meteorological measurements, as well as a wide range of other scientific activities including ozone monitoring, geomagnetics, seismology, solar radiation and environmental monitoring. The Observatory is called Valentia because it was originally located on Valentia Island.

Valentia Island’s association with meteorology began in 1860, when Admiral FitzRoy, who was head of the Meteorological Committee of the (British) Board of Trade made arrangements for regular communication, by telegraph, of meteorological observations from 15 land stations in Britain and Ireland. Valentia was chosen as one of those stations because it had a telegraphic link to London to service the trans-Atlantic cable. The importance of Valentia as a location for meteorological observations was recognised immediately, it being situated in the path of most of the weather systems coming from the Atlantic. In 1865 the British government decided to set up observatories with self recording instruments, at seven locations including Valentia. Six of them were in established scientific institutions, Kew Observatory, Falmouth Polytechnic Institution, Stonyhurst College, Armagh Observatory, the Observatory at Glasgow University, and the Observatory at Aberdeen University. The Observatory at Valentia was set up by the Meteorological Committee. it was funded by them and manned by their own staff. The Observatory was set up in a house leased from the Knight of Kerry at the Revenue on Valentia Island, in August 1868.

The recording instruments installed were the Adie Photographic Barograph and Thermograph and the Robinson Beckley Anemograph. The station was supplied with the Beckley Rain Recorder in 1869 and with the Campbell-Stokes Sunshine Recorder in 1879. These instruments are now on display in the Observatory museum. The Observatory continued on the Island until March 1892, when it was transferred to its present location.

Since the setting up of the Irish Meteorological Service, the work programme of the Observatory has greatly expanded and it has always been equipped with the most technologically advanced equipment and instrumentation. The Observatory is well known and very highly regarded by the scientific community. As well as fulfilling its national and international role within Met Éireann it is involved in many projects with other scientific bodies both in Ireland and abroad.

The manual weather station at Valentia was officially closed on 1 April 2012 and was replaced by an Automatic Weather Station at the same location from 2 April 2012. On the same date, the number of daily radiosonde ascents reduced from 4 to 2.