The Research and Applications Division develops and implements Met Éireann’s operational  short-range Numerical Weather Prediction (NWP) models. The division conducts research  in NWP as part of the ACCORD  consortium.

There are a number of NWP consortia in Europe, shown below: 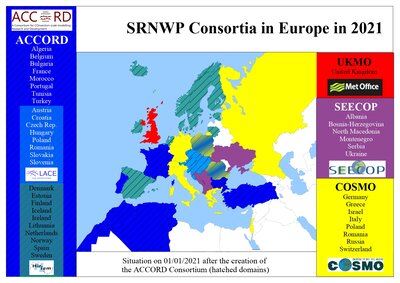 Met Éireann joined the HiRLAM (High Resolution Limited Area Model) group in 1986. In recent years, HiRLAM has collaborated with Météo France and the ALADIN consortium for the development of the HARMONIE-AROME model, leading to a merging and the creation of ACCORD  (A Consortium for COnvection-scale modelling Research and Development).

Met Éireann commits staff resources each year to NWP research activities within ACCORD, undertaking development of the HARMONIE-AROME model in the areas of:

The two main components of any atmospheric model are known as the dynamics and the physics. For the dynamics, we divide our forecast region into a grid and use mathematical algorithms to solve the equations governing the motions of the atmosphere at each grid-point. Currently, this grid has a 2.5km resolution. The physics of model takes into account the key processes which occur at scales smaller than this, and thus are not “seen” by the grid. These include solar radiation and turbulence.

Further details may be found on the HiRLAM website and in the paper by Bengtsson et al., Monthly Weather Review, May 2017.

In addition to the dynamics and upper-air physics in an atmospheric model, the model includes surface physics and descriptions usually known collectively as a surface model. The HARMONIE-AROME forecast model, used and developed by Met Eireann staff, uses the SURFEX surface model.

SURFEX includes the physics of modelling natural land surfaces such as soil and vegetation, urban areas, lakes, seas and oceans as well as chemistry and aerosol processes, see here. 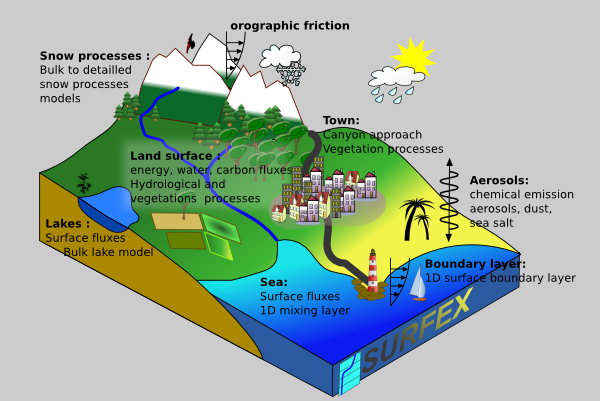 Weather forecasts are produced using computer models of the atmosphere. These models are based on observations of the atmospheric conditions at a certain moment in time and on equations which describe how the different parts of the atmosphere interact with one another. However, errors and uncertainties can creep into these forecasts from a number of different sources. Firstly, the number of available weather observations may be quite large, but certain areas still lack the spatial resolution needed to accurately capture all meteorological phenomena. Ideally, one would need an observation every couple of metres over land and sea to have a complete description of the atmospheric state at any one time. Secondly, in order to model the atmosphere’s complex physical processes, assumptions about these processes must made. Making these unavoidable assumptions can lead to errors in the computer model meaning uncertainty can creep into the forecast. Thirdly, and perhaps the most inescapable issue when it comes to forecasting, is the inherent chaotic nature of the atmosphere. Even the slightest difference in the initial set-up of the forecasting model can lead to completely different forecasts.

In order to mitigate these issues, scientists developed a forecasting tool known as an Ensemble Prediction System (EPS), the best known of which is the EPS of the European Centre for Medium-Range Weather Forecasts (or ECMWF). These systems aim to take the different sources of uncertainty and error into account by using multiple forecasts (or in other words, many different model set-ups). The result of such a system is a number of forecasts or a spread of many possible futures. This gives the forecaster a much better grasp of the uncertainty related to any meteorological situation and thus aides him/her in making a decision about future weather. 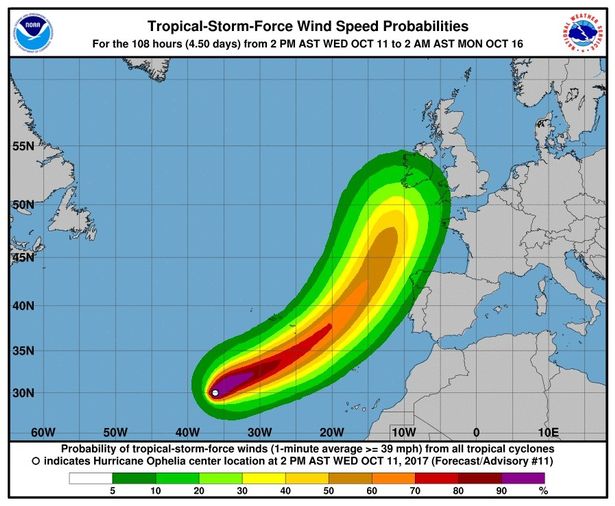