Met Éireann produces specialised forecasts for Irish coastal waters and inland lakes. It works closely with the Coastguard and other agencies in the protection of life and property. Met Éireann has produced a number of reports into how climate change will affect water levels around the coasts.

“The Wave Climate of Ireland: From Averages to Extremes”

Due to its location in the Northeast Atlantic, Ireland possesses one of the most energetic wave climates in the world. When low pressure systems form in the North Atlantic, winds blow across the surface generating waves or swell. Swells from these systems propagate eastward towards the coastline of Ireland, often producing large sea-states. Local winds also play an important role in the Irish wave climate, particularly in the Irish Sea, making the wave climate around the Irish coast quite heterogeneous.

Up-to-date knowledge of the wave climate of Ireland is desirable for all marine activities and coastal communities. Along with wave buoy measurements, long-term hindcasts with a high spatial resolution, properly calibrated against available measurements, can provide vital information about the present wave climate averages, extremes and variability.
Average significant wave heights display a pronounced spatial variation around the coast: from 3 m off the west coast to less than 1-2 m in the Irish Sea. 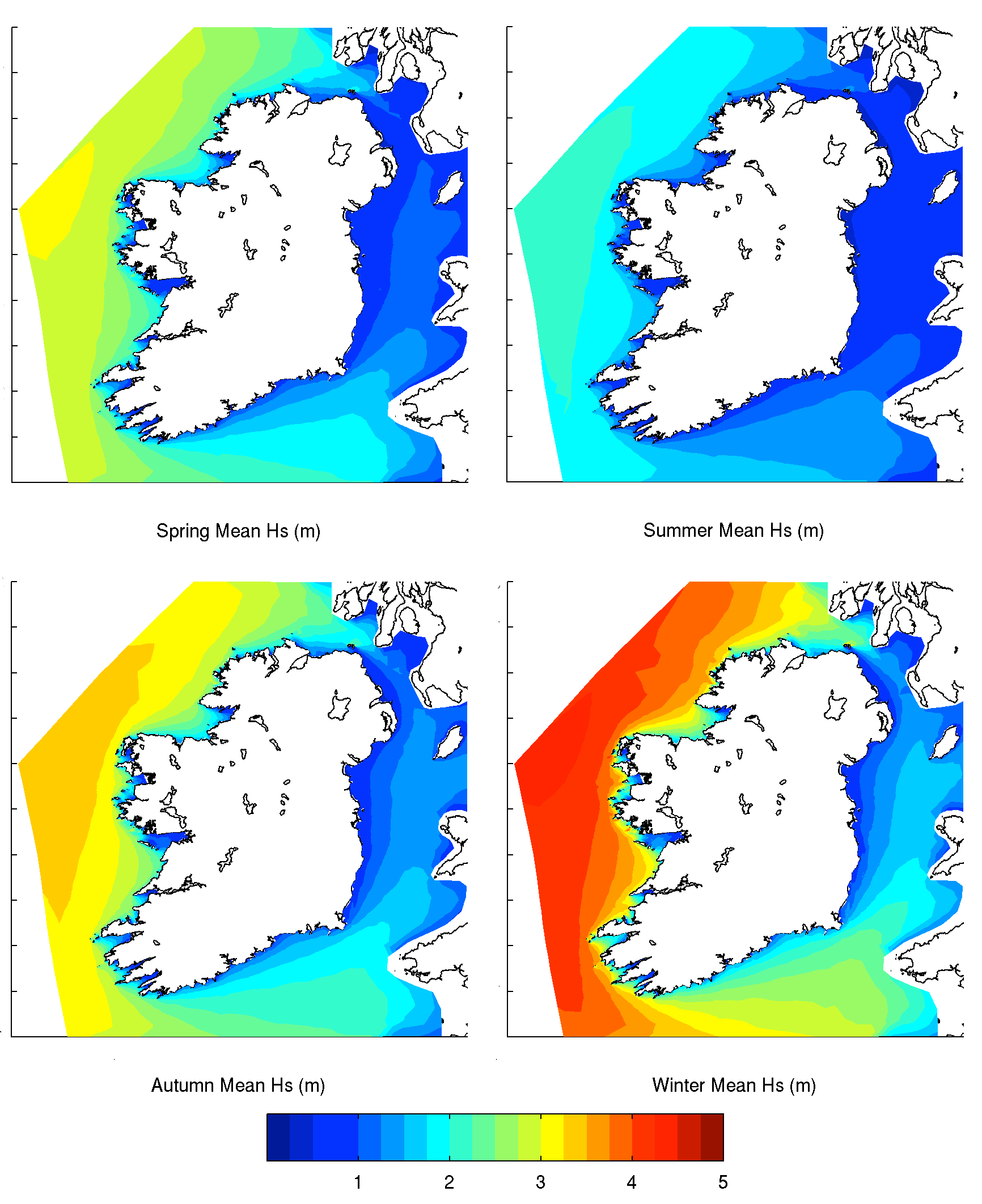 The largest values can be seen in winter off the west coast (close to 4-5 m). In contrast, the average significant wave heights do not exceed 2 m in the Irish Sea coast in any season [1].

The winter of 2013/2014 will be remembered for its powerful waves in the North Atlantic and particularly in Ireland. On the 6th of January 2014 a monster wave measuring 23.4 m wave (trough to crest) was recorded at the M4 buoy (in a significant wave height of 14.65 m). This is currently the largest individual wave recorded by the Irish Marine Weather Buoy network. This was followed shortly after by another huge 25 m wave, measured at the Kinsale Energy Gas Platform on the 12th February 2014.

Identifying the wave climate over past decades is a first step towards quantifying how global climate change will impact the future wave climate. Global climate models project warming of both the atmosphere and the Earth’s ocean which will consequently affect the mean sea level, ocean wave height, and the frequency and severity of extreme weather events [4]. Recent research carried out by Met Éireann, suggests that average annual, summer and winter wave climate conditions may decrease towards the end of the century, although there is still a large amount of uncertainty in the projections of North Atlantic winter storm tracks, and therefore swell generating surface winds [5].