Climate Indices are a useful resource for measuring and quantifying climate variability and associated trends.

The ETCCDI indices are a set of core climate indices, used to monitor the occurrence of climate extremes of temperature and precipitation. The ETCCDI was a UN-backed working group formed to assess the best practices for the characterisation of climate variability and climate change.

These are composed of 27 indices, based on daily observations of temperature and precipitation. All 27 indices are calculated for annual values but a subset of these indices are also calculated on a seasonal and monthly basis.

More information on the indices can be found in the tabs below, including factsheets for each individual index.

The well-established warming trend in mean temperatures, both globally and in Ireland (Cámaro García and Dwyer, 2021), is also evident for the ETCCDI temperature indices. Cold extremes are becoming both less severe and less frequent. Warm extremes are also increasing in frequency and, to a lesser extent, in severity. These results for Ireland (shown below) are in general agreement with findings in a global context (Dunn et al. 2020). The temperature indices presented below are grouped together into three groups: those based on minimum temperature (TN), maximum temperature (TX) or a combination of the two.

Annual values of the TNn (left) and TNx (right) indices at Valentia Observatory, with a linear fit trend line in blue/red.

Both the coldest night (TNn) and hottest night (TNx) of the year are becoming warmer at most stations (shown above at Valentia Observatory). Similarly the frequency of “cold nights” (TN10p) has decreased and the frequency of “warm nights” (TN90p) has increased, relative to the 1961-1990 climatology (see top of page). As a result, widespread decreases have been observed in the occurence of frost days (FD). Additionally the first observation of a tropical night (TR, where TN > 20°C) was observed at an Irish synoptic station in July 2021, at Valentia Observatory (as can be seen in the graph of TNx at Valentia above).

Further information on minimum temperature (TN) indices can be found in the linked factsheets below: 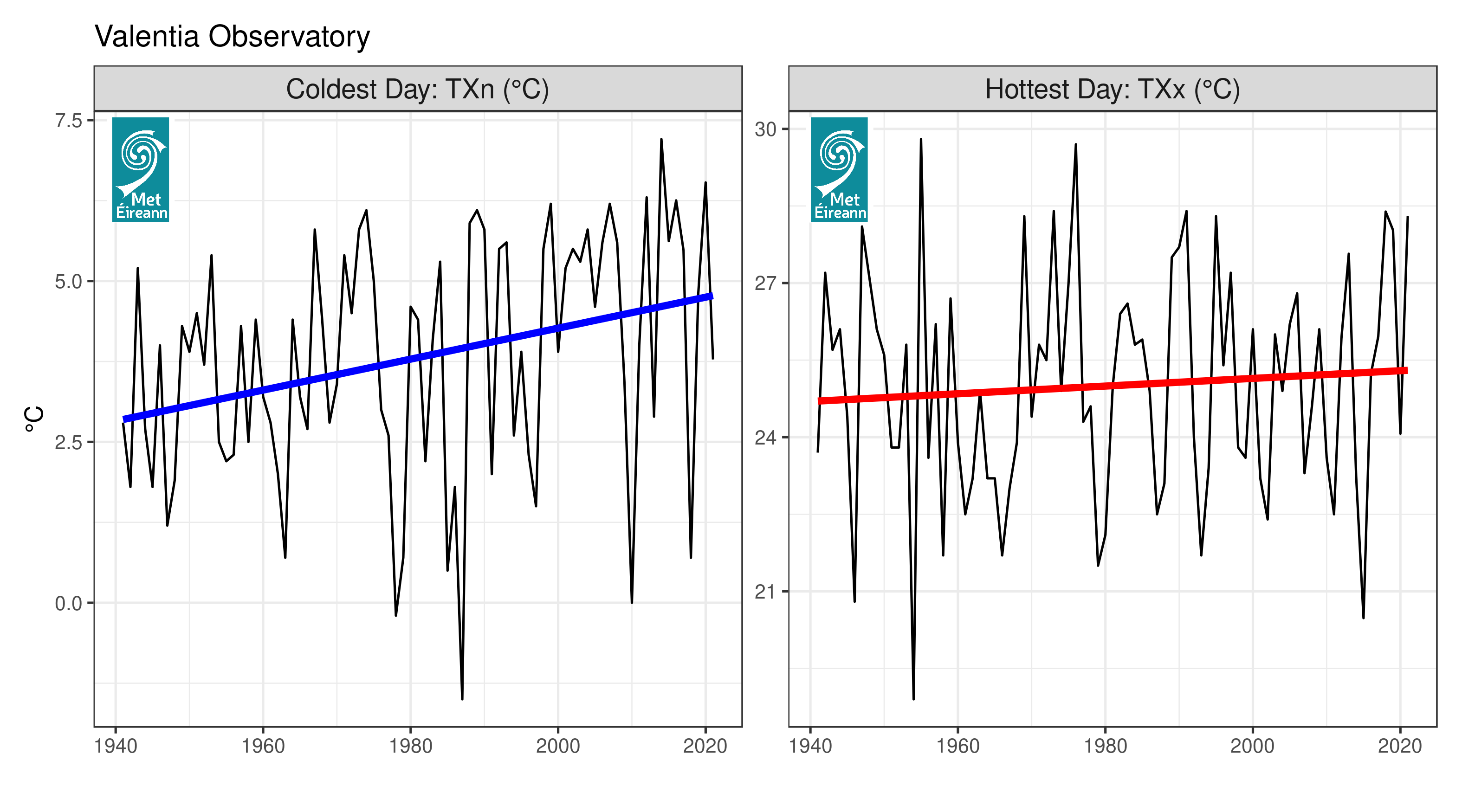 Annual values of the TXn (left) and TXx (right) indices at Valentia Observatory, with a linear fit trend line in blue/red.

The coldest maximum temperatures of the year (TXn) is increasing at most stations (shown above at Valentia Observatory). The TXx index, which is the warmest temperature of the year, does not have as robust a signal as other similar indices (TNn, TNx and TXn), but there is still an increasing trend at the majority of stations (though not present here at Valentia). The percentile-based indices measuring the frequency of “cold days” (TX10p) and “warm days” (TX90p) are decreasing and increasing respectively, relative to the 1961-1990 climatology (see top of page). Fixed threshold maximum temperature events, Icing Days (ID, when TX < 0°C) and Summer Days (SU, TX > 25°C), do show decreasing and increasing trends respectively (in line with the overall warming trend), but these are generally found to not be statistically significant. This is likely due to the fact that such values of maximum temperature are relatively rare in the Irish climate.

Further information on maximum temperature (TX) indices can be found in the linked factsheets below:

The general warming trends have also had an impact on the two indices that are based on a combination of both maximum and minimum temperatures (GSL and DTR). As a result, growing seasons are mostly increasing at the majority of stations around Ireland. The diurnal temperature range is slightly decreasing at some stations, but with a great deal of uncertainty associated with its trends.

Further information can be found in the linked factsheets below:

The precipitation indices exhibit large year to year variability. There are indications of increasing rainfall in western locations, though the statistical significance of these trends are generally lower than what was found for temperature indices.

Values of total annual precipitation (PRCPTOT index) at 9 stations, with a linear fit trend line in green and overlaid on a map of Ireland.

Accumulated total precipitation on “wet days” (PRCPTOT) has increased along the west coast, particularly in the last 30 years, shown in graphs above. The Climate Status of Ireland 2020 report found a 6% increase in annual rainfall, compared to 1961-1990 (Cámaro García and Dwyer, 2021), and this is primarily concentrated in western coastal locations. These increases have been found to persist for time series that have been extended further into the past through data rescue and homogenisation, though generally with low levels of statistically significance (Noone et al. 2016; Ryan et al. 2021). Some of these longer data series also indicate a reduction in summer rainfall, Noone et al. (2016), but this is not evident for the shorter digitized records used here.

Lower threshold-based indices (R5mm and R10mm) show similar increases to PRCPTOT, but the most extreme rainfall indices (R20mm, R95pTOT, R99pTOT and Rx1day) do not have many statistically significant trends in the digitized rainfall records. Recent research into data rescue and homogenisation indicate that there are more robust trends in these extreme rainfall parameters in the midlands and south-east when the data was extended back to the start of the 20th century, Ryan et al. (2021).

Further information on precipitation indices can be found in the linked factsheets below: