How Met Éireann produces a forecast

There are a number of steps before a forecaster reads out the Sea Area Forecast on national radio or we tweet a short forecast. The four steps are:

Every minute of every day Met Éireann is recording observations of numerous weather parameters throughout the country. Wind speeds and direction, precipitation amounts, temperatures, pressure reading and many other fields are recorded. There are around 25 weather stations making these automatic observations and these are then sent back to HQ in Glasnevin. Our station in Valentia Observatory launches a radiosonde balloon daily, which measures certain physical parameters as it climbs through our skies. 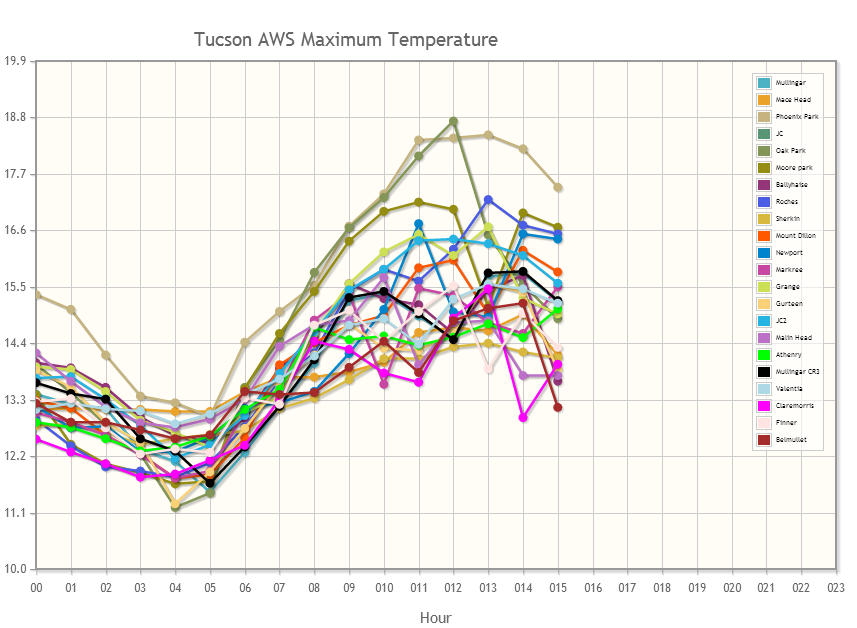 Why are we collecting these observations? Well, to produce a forecast we first need to determine the current state of the atmosphere. This is achieved through Data Assimilation.

In Data Assimilation a previous forecast is compared to the actual observations. The state of the model is then updated to reflect the most up to date observations. This is called the analysis.

At this point a new forecast is run, and if needs be another and another until certain conditions are met. Each measurement within the assimilation is contributing to something called a Cost Function, J (see equation below). This Cost Function needs to be minimised so that we arrive at the optimal starting point for a forecast. One method to achieve this is called three dimensional variational data assimilation or 3D-Var. The following graph gives an overview of 3D-Var. So through combining observations with a previous weather forecast we obtain the best estimate of the current conditions in the atmosphere. We can then move this forward in time through the use of Numerical Weather Prediction forecast models. 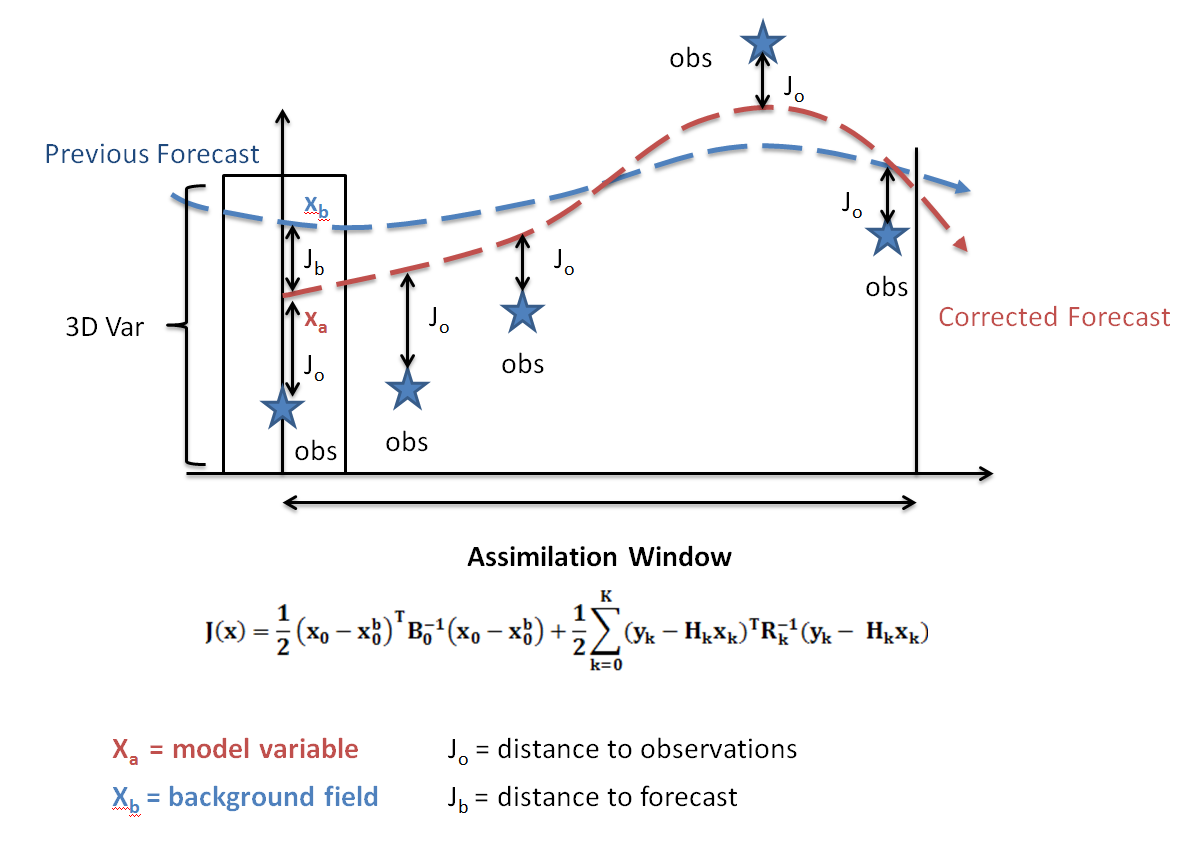 At Met Éireann we run the HARMONIE-AROME Numerical Weather Prediction (NWP) model on supercomputers at the European Centre for Medium-Range Weather Forecasts (ECMWF) and the Dutch national weather service (KNMI).

More details on the operations may be found here.

The model produces forecast data for a wide variety of surface parameters such as wind, rain, temperature and precipitation. However, the NWP model produce forecasts not only at ground level, but for pressure levels up to 30km. This data is then fed to the forecasters in the Forecast and Aviation Divisions in Met Éireann. 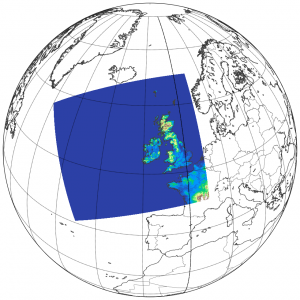 Bringing it all together to produce a forecast

Met Éireann maintains a 24 hour, 7 days a week, 365 days a year weather watch. Forecasters in both the General Forecast and Aviation offices work all day and night to produce forecasts for the general public, specialist customers, airports and the emergency services.
The forecast data is visualised through IBL’s Visual Weather system. This allows the forecasters to view the forecast data and cycle through the forecast, zoom into certain locations and to produce cross sections for aviation users. 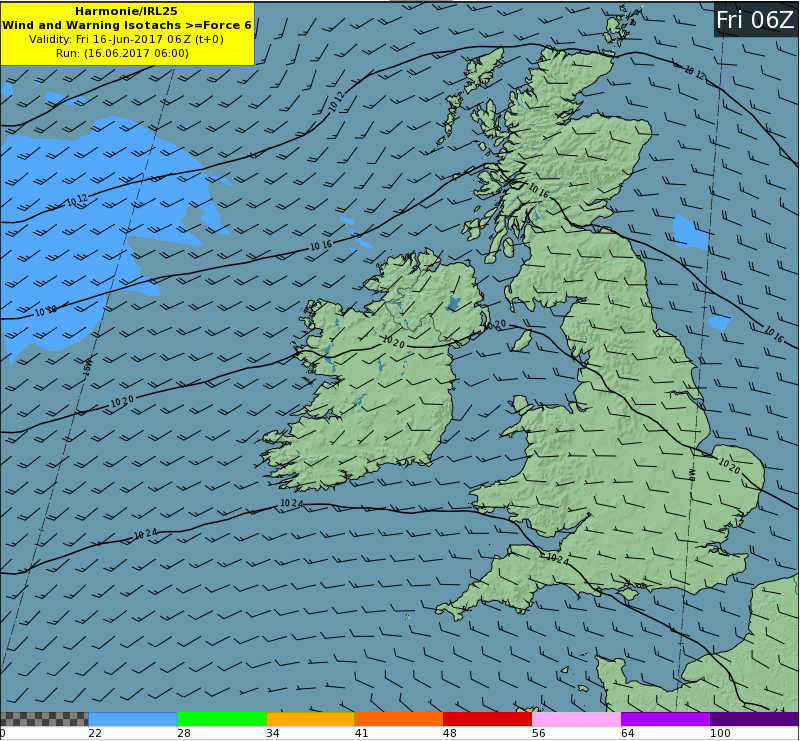 Forecasters use our extensive network of observation stations as well as radar and satellite imagery to assist in the creation of weather forecasts. For the general public these forecasts take the form or radio and TV broadcasts, updates on our website and mobile apps as well as tweets.

Then, depending on which duty the forecaster is working on, they will either produce a script for transmission on RTÉ Radio 1, or a live TV broadcast on one of the RTÉ TV stations.

For Aviation forecasters they could produce a TAF or Terminal Aerodrome Forecast for an Irish airport. Occasionally the emergency services will ask Met Éireann for assistance during a search and rescue operation.

All of these forecasts originate with the collection of observations across the country from Malin Head in the north to Sherkin Island in the south.