Met Éireann has a long association with Aviation in Ireland; indeed it was in 1936 that the Irish Meteorological Service was established to provide accurate weather information for transatlantic aviation.

Met Éireann maintains a presence in a number of airports and aerodromes across the country. Met Éireann is in the process of upgrading its aviation observing systems through a project called the Aviation Modernisation and Automation Project (“AMAP”).

The airport opened in 1922 and was originally run by 2 pilots from the Royal Air Force. The first plane acquired by the Air Corps was purchased for the purpose of bringing General Michael Collins back from the Treaty negotiations should the need arise.

On the 12 April 1928 the first successful East-West crossing of the Atlantic was made. Baldonnel was the departure point for this flight and one of the crew members on the flight was Comdt. James Fitzmaurice, Commanding Officer of the Air Corps.

There has been a Climate station here since 1943 and the Meteorological Service established a full synoptic station at the location in 1964.

The strength of the wind, when coming from a south-westerly direction, is stronger than in other areas near Dublin because of the location of this station in relation to the Dublin Mountains. Casement experiences less fog than Dublin Airport. Snowdrifts have been experienced here in winters during the 1960’s, 1970’s and 1980’s. 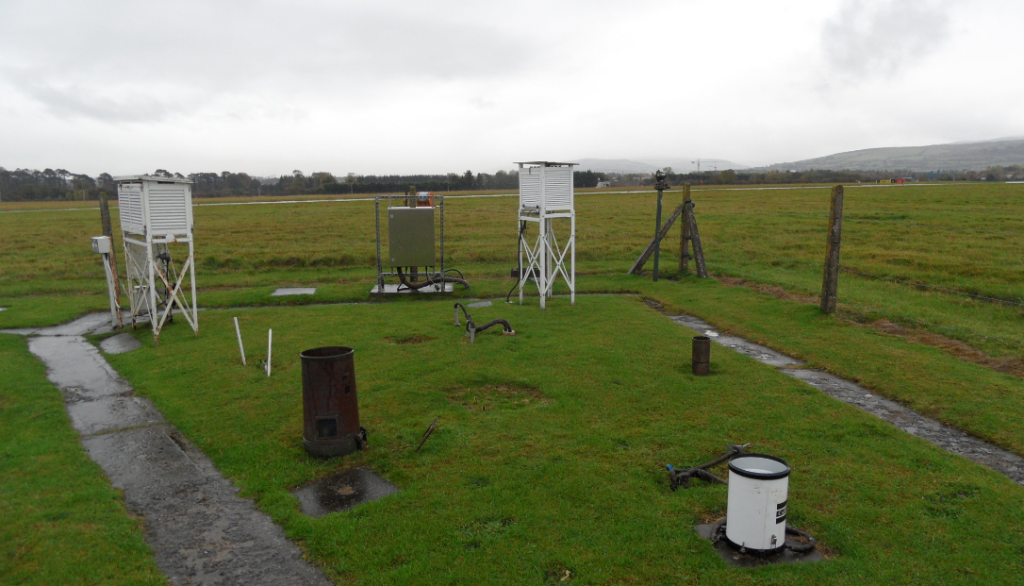 The airport opened in October 1961, close to the site of a former airfield known as Farmers Cross. Preliminary meteorological observations had been taken at this site in 1946-47. Initially, observations were carried out on request only. Then towards the end of 1961 these were put on a 24hr basis and so the station became part of the synoptic network of the Meteorological Service. A forecast section for aviation purposes was opened in 1966 and, as the demand for general forecasts grew, an automatic telephone weather service was installed.
This service proved to be highly popular with the public, reaching a peak of 750,000 calls in 1991.

The aviation forecast section closed in 1988, with responsibility for the forecasts being taken over by the Central Aviation Office in Shannon. For the next 10 years pilots were able to avail of a self-briefing service, provided by Met Éireann, in the main terminal complex. The facility provided the latest radar pictures, TAFS, METARS, upper wind and Sig. Weather charts and a phone link to the aviation forecaster was also available. The self-briefing service closed in 2008 with the introduction of Met Éireann’s online Met Self-Briefing facility. Met Éireann is currently planning to move the observing office to a new location across the airfield adjacent to the new control tower. It is expected that the move will be completed in mid-2018.

The airport is particularly prone to fog conditions. This is due to its location near the south coast and its height above sea level. However, with the introduction of Category 2 status in 1990 the number of flight diversions has dropped dramatically, although to some people Cork will always be regarded as a foggy airport.

The first synoptic observations started at Dublin Airport in 1939. It was in the following year that the first commercial flight departed from Dublin Airport on the 19th January.

By the end of 1943, the forecast office at Dublin Airport was providing a service to cross-channel flights and had relieved Foynes of responsibility for the service to the Air Corps and the Defence Forces.

Due to the increasing demands from the general public and agricultural, industrial and other interests, it was decided to set up a Central Analysis and Forecasting Office (CAFO) in Headquarters in O’Connell St. Dublin on 23rd March, 1961 to deal with non-aviation requests.

In 1988 the Aviation forecast section was moved to the newly formed Central Aviation Office at Shannon Airport.

From 1988 to the present day, Met Éireann at Dublin Airport continues its service to aviation by providing constant weather watch 24 hours daily. Pilots can now use a Met Self Briefing Unit, provided by Met Éireann, in the AIS offices in the Link building. This facility provides PC access to the central computer for TAFs, TAFORS, METARS and SIGMETs for route information to the aircraft destination with lists of alternate airports. Also available are Upper Air wind charts, Sig. Weather charts, Live Radar and Satellite pictures and screens with current observations and RVR (Runway Visual Range) readouts. Met Éireann at Dublin Airport is actively co-operating with Dublin Airport Authority and the IAA to cater for the ever increasing growth in passenger numbers. 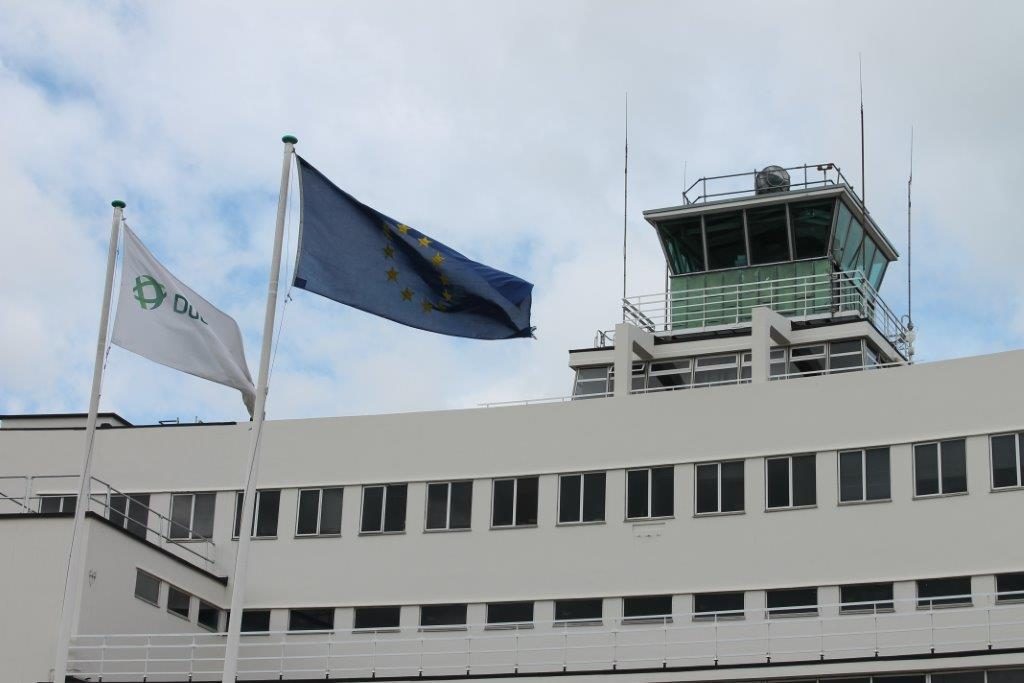 Knock Airport opened for flights in May 1986.

In the last five years Ireland West Airport Knock’s position has been further strengthened as Ireland’s fourth international airport with a major increase in the number of passengers using the facility. Ireland West Airport is now the main international air access gateway for the West, North West and Midland regions of Ireland. The Airport now serves more than 20 scheduled and charter destinations across Ireland, the UK, Europe and beyond. 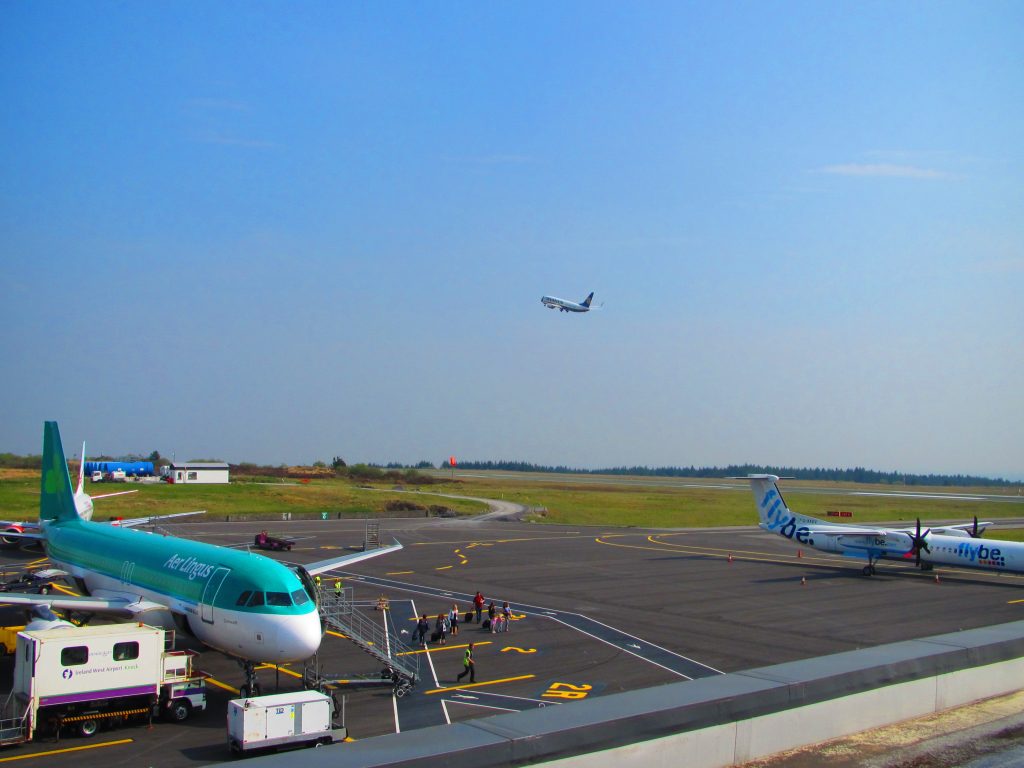 Shannon Airport was opened in 1942. In 1944 a synoptic station was established at the airport for the Meteorological Service. In October 1945 the first scheduled flight passed through Shannon. In 1947 the world’s first duty-free shop opened at the airport.

Shannon Airport’s location was chosen because of its favourable topography for aircraft. Many airlines use Shannon as a training venue for new pilots because of the ideal conditions at the airport.
Weather radar was installed at Shannon in May 1996. It is arguably the most important radar in Ireland as it is the first to detect weather from the south-west. It can show rainfall to a range of 240 Km and wind to a range of 100 Km. A high frequency pulse (freq. 5.6 GHz) is transmitted at a typical rate of 570 pulses per second (normally referred to as the PRF or pulse repetition frequency). This pulse is reflected back to the radar if it hits rainfall and it is then processed by computers to display the rainfall in colour code for easy recognition. 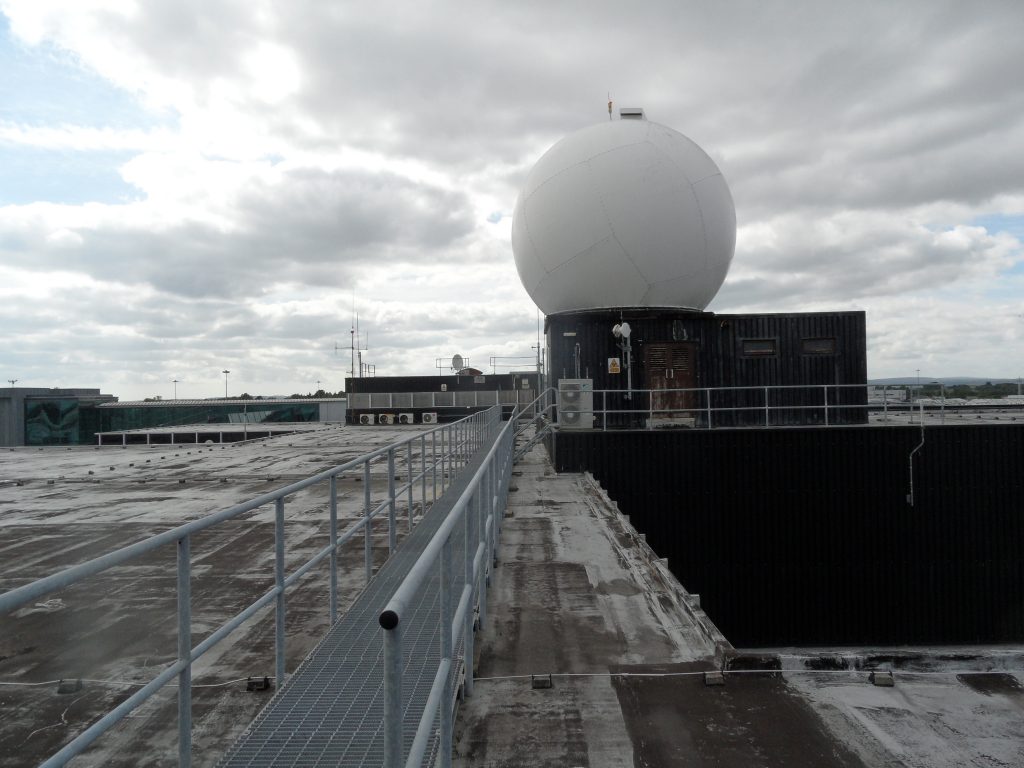