The objective of a geomagnetic observatory is to record continuously, and over the long term, the time variations of the magnetic field vector and to maintain the accurate absolute standard of the measurements. At Valentia Observatory, absolute magnetic observations have been made since 1888 and the variations in the earth’s magnetic field have been continuously recorded since 1953. In over 110 years of observations, 1897-2014, we have witnessed the change in declination from -22° west to -5° west.

At any location, the Earth’s magnetic field can be represented by a three-dimensional vector (see figure): 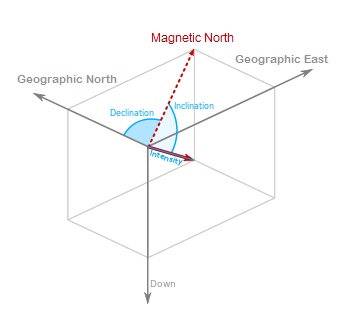 Intensity: The intensity of the field is often measured in gauss (G), but is generally reported in nanotesla (nT), 1 G = 100,000 nT. As the 2010 World Magnetic Model shows, the intensity tends to decrease from the poles to the equator. A minimum intensity occurs over South America while there are maxima over northern Canada, Siberia, and the coast of Antarctica south of Australia.

Inclination: The inclination is given by an angle that can assume values between -90° (up) to 90° (down). In the northern hemisphere, the field points downwards. It is straight down at the North Magnetic Pole and rotates upwards as the latitude decreases until it is horizontal (0°) at the magnetic equator. It continues to rotate upwards until it is straight up at the South Magnetic Pole.

Geographical Variation: Components of the Earth’s magnetic field at the surface from the World Magnetic Model for 2010. 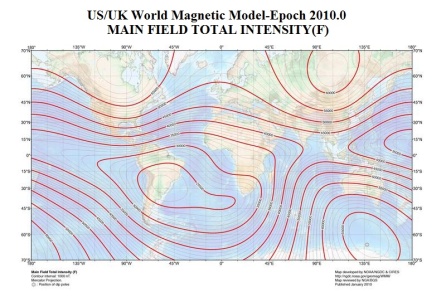 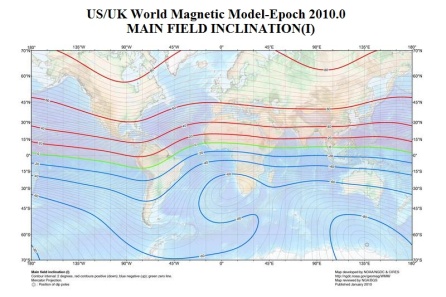 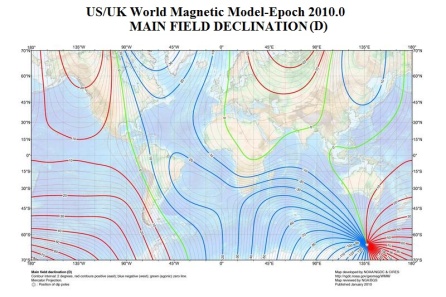 Magnetic survey data are used to update lines of equal declination on the aviation maps produced by the Irish Aviation Authority (IAA).

The magnetic declination values for IAA reference points are provided annually.
Compass calibration circles at airports are surveyed and calibrated.

Compasses are calibrated regularly for the Air Corps and occasionally for private aviators.

Data are provided on request to private companies and research bodies.
Magnetic data is sometimes needed in the investigation of power failures and difficulties in telecommunications.