Met Éireann currently runs the HARMONIE-AROME  NWP model on the domain shown below. The operational configuration consists of 1000 x 900 grid points in the horizontal at 2.5 km resolution, with 65 levels in the vertical. A 54-hour forecast is produced eight times a day, beginning every three hours from 00Z.  The model is run as an ensemble system, called IREPS  (the Irish Regional Ensemble Prediction System). 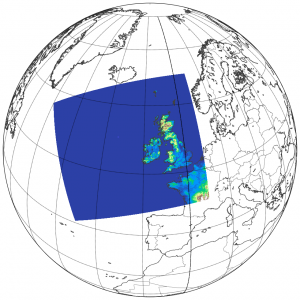 The HARMONIE-AROME model was first introduced into operations in Met Éireann in 2011. As research progresses, new versions of the model code (known as cycles) are developed. These allow us to upgrade our operational system. The table below highlights the major recent upgrades carried out.