Mean temperatures across Ireland were above their long-term averages, with September temperature records broken at several stations.  Phoenix Park in Dublin also had its warmest September in 122 years.

Mean temperatures for Ireland were 2.1°C above their long-term averages (LTA 1981-2010) for the month, with an even higher value for the monthly minimum average temperature of 3.0°C. The mean maximum temperature for September was 0.8°C above LTA. In general, the temperatures observed were around that observed in August 2021 and in some areas, even warmer.

This warm weather is partly due to the warm nights experienced during September in all areas, with cloudy weather and high pressure dominating. Ireland, and each province, recorded their warmest minimum monthly temperatures:

The Met Office have given a value of 10.7°C for Northern Ireland – its highest average minimum September temperature on record.

While in the long-series dataset (observations recorded between 09 UTC on the day to 09 UTC the next day and over 24 hours):

Dr Sandra Spillane, Climatologist at Met Éireann said: “September 2021 has been a notably warm and dry month across the island of Ireland, with mean temperatures well above average and below average rainfall.  Much of September was characterised by periods of high pressure which often brings dry and settled weather, before conditions turned more Autumnal towards the end of the month as low pressure moved across Ireland.”

The latest climate projections for Ireland signal a warming trend across all seasons into the future.  More details on September 2021 in our Monthly Statement. 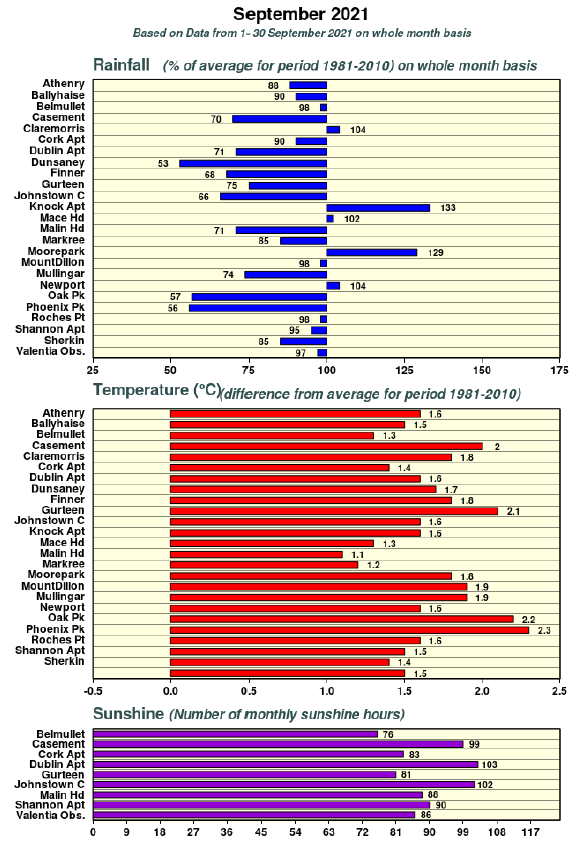