Warm, dry for most and dull

The very dry weather from the end of August continued for most of the first week of September as high-pressure to the north of Ireland slowly pulled away to the east. Atlantic weather fronts brought rain to the West and North on the 5th, but the South and East stayed mostly dry. Cloudy conditions during the first half of the week broke up to give some warm sunshine towards the end of the week. Mist, fog and drizzle were common features at night. Low-pressure moved up from the south at the beginning of the second week giving some widespread heavy and sometimes thundery rain or showers. The rest of the sec-ond week continued mostly cloudy with scattered showers and slack winds, but stayed relatively warm, as a weak area of high pressure passed from west to east over the country. The third and most of the fourth weeks saw low-pressure to the north and high-pressure to the south steer a mild and cloudy tropical maritime air mass over Ireland in a westerly airflow. This brought several Atlantic weather fronts across the country with some spells of rain or showers, but amounts stayed generally low, especially in the East. An active cold front, which brought widespread heavy rain on the 26th and 27th, introduced a much cooler polar maritime air mass. This marked a change to more autumnal conditions that continued to the end of the month with rain or showers on each day.

All mean air temperatures across the country were above their Long-Term Average (LTA) for the month. Deviations from mean air temperatures ranged from 1.1 °C (14.3 °C mean temperature) at Malin Head, Co Donegal to 2.3 °C (15.5 °C mean temperature) at Phoenix Park, Co Dublin. Mean temperatures for the month ranged from 13.6 °C (1.6 °C above its LTA) at Knock Airport, Co Mayo to 15.7 °C at both Sherkin Island, Co Cork (1.4 °C above its LTA) and Shan-non Airport, Co Clare (1.5 °C above its LTA) (its warmest September on record (length 71 years)). The month’s lowest temperatures were recorded on Wednesday 29th with the lowest air minimum reported at Athenry, Co Galway with a temperature of 3.1 °C and the lowest grass minimum reported at Mullingar, Co Westmeath with -0.5 °C. The highest maximum temperature of 27.9 °C was reported at both Shannon Airport, Co Clare (its highest max temperature for September on record (length 75 years)) and Valentia Observatory, Co Kerry (its highest max temperature for September since 1991), both on Tue 7th. There was no air frost reported this month. Two stations reported ground frost. The number of days with ground frost ranged from zero days at Phoenix Park, Co Dublin to 1 day at both Mullingar, Co Westmeath and Claremorris, Co Mayo. Along with Shannon Airport, nine other stations had their highest maximum temperature for September on record, all on Tuesday 7th (record lengths ranging from 11 to 75 years). Along with Shannon Airport, 11 other Stations had their warmest September on record (record lengths ranging from 11 to 75 years).

Sunshine: Dull, lowest in the Northwest

Monthly mean wind speeds ranged from 4.3 knots (8.0 km/h) at Moore Park, Co Cork to 12.1 knots (22.4 km/h) at Mace Head, Co Galway. Gales were report-ed on Sunday 26th and Wednesday 29th. The number of days with gale force winds ranged from zero days at most stations to 2 days at Belmullet, Co Mayo. There were no strong gales or storms reported this month. Both the month’s highest gust and 10-minute mean wind speed was reported at Belmullet, Co Mayo. The highest gust was on Sunday 26th and Wednesday 29th, respectively with 47 knots (87 km/h) while the month’s highest 10-minute mean wind speed was 36 knots (67 km/h) – Gale Force 8 – on Wednesday 29th. 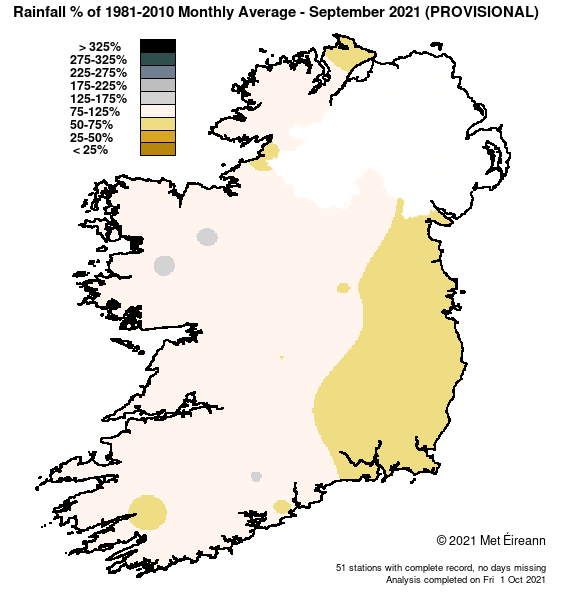 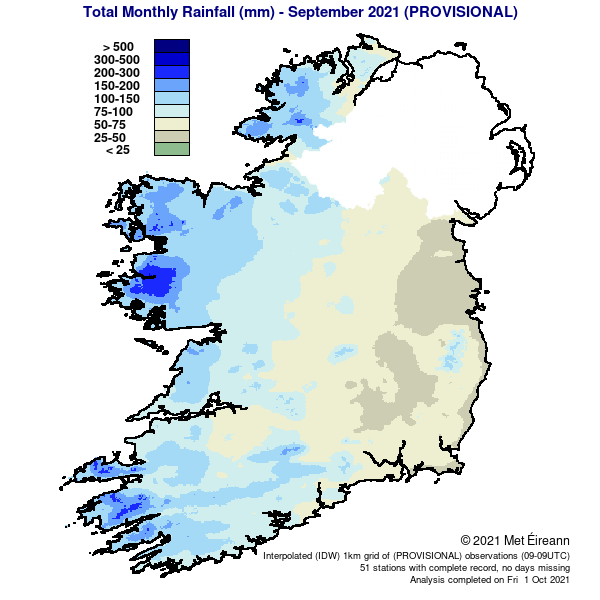