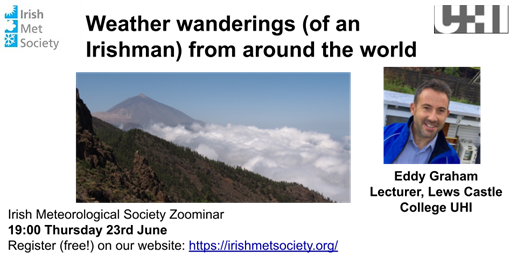 There will be a talk hosted by the Irish Met Society on Thursday 23rd June at 7pm titled “Weather wanderings (of an Irishman) from around the world”. This talk will be given by Dr Eddy Graham from the University of the Highlands and Islands. Dr Graham is a long-time supporter of the Society. In this easy-going talk, Eddy will express how the love of the Irish weather and its landscape (experienced as a child in Ireland) has ultimately helped him to make progress on the wider international field of meteorology and climatology today, both in research and teaching.

A keen weather observer from an early age, Eddy was active in the Irish Meteorological Society (IMS) as a teenager during the 1980s and served on the IMS committee (also as Editor of the IMS Newsletter) for a spell in the early 1990s. Eddy studied Natural Sciences at Trinity College Dublin before leaving Ireland in 1994 to pursue an MSc in Applied Meteorology at the University of Reading. After working for several years as a meteorologist in the UK, he emigrated to Canada in 2000 where he worked with Environment Canada on historical climate reconstruction. In 2002 he moved back to Europe, starting work on a PhD at the University of Fribourg (Switzerland). He used global reanalyses datasets to predict astronomical site conditions around the world. Eddy is still involved in similar projects today in the monitoring of climate conditions at current and future telescope sites in Kenya, South Africa, the Canary Islands, California, Chile and Hawaii. Since 2009 Eddy has been a lecturer in Sciences, Geography & Sustainable Development at the University of the Highlands & Islands on the Island of Lewis.

Eddy is also Editor-in-Chief of the Royal Meteorological Society’s members’ journal Weather, a role he has held since 2019.

Register to view this zoominar on Irish Met Society