Mostly dry this morning with mist and fog patches giving way to sunny spells. Cloudier through in the east with patchy rain or drizzle at times. Cloud will also increase along the west coasts through the morning bringing outbreaks of rain. Rain will gradually extend eastwards towards the midlands by evening, with some heavier bursts developing in the west. Highest temperature of 14 to 18 degrees in mostly light to moderate south to southwest winds, strengthening along Atlantic coasts during the afternoon.

A band of showery rain will progress across the country early in the night with a few heavier burst especially in the south. Clearer spells and isolated showers will follow from the west later in the night. Lowest temperatures of 7 to 11 degrees coolest in the south and west with some mist and fog patches developing as light southerly winds veer westerly.

Sunny spells and scattered showers on Sunday some turning heavy by afternoon, especially in the northwest, with the chance of isolated thunderstorms. Highest temperatures of 14 to 17 degrees, in mostly moderate northwesterly winds.

OUTLOOK: Generally dry for early days of the week, and while there is still some uncertainty it currently looks to be followed by cool, wet and rather windy spells as the week progresses.

SUNDAY NIGHT: Overall dry with long clear spells, however it will become cloudier in the west later in the night with the chance of isolated showers near Atlantic coasts. Lowest temperatures 8 to 11 degrees, with some mist patches developing in light and variable breezes.

MONDAY: Mostly cloudy with patchy rain or drizzle at times. Highest temperatures of 16 to 19 degrees, in just light westerly breezes.

MONDAY NIGHT: There will be a mix of cloud and clear spells overnight and just the chance of isolated patches of light rain, drizzle and mist. Lowest temperatures of 9 to 13 degrees, in light to moderate southwest breezes.

TUESDAY: A mostly dry start to the day with sunny spells, though cloud will spread from the west with patchy outbreaks of rain and drizzle developing over the western half of the country during the afternoon. Highest temperatures of 16 to 19 degrees, in moderate to fresh southwest breezes, increasing strong on west and northwest coasts in the afternoon.

TUESDAY NIGHT: There is a little more uncertainty from Tuesday evening onwards with current indication showing high pressure weakening and more unsettled conditions taking hold. A band of rain, heavy at times, will extend from the northwest down across the country with clear spells following into the northwest by dawn. Lowest temperatures of 10 to 14 degrees while moderate southwest winds will veer westerly and easy most light.

WEDNESDAY: Sunny spells and scattered showers, most frequent in the west and northwest where there may be a few heavier burst. Highest temperatures of 14 to 17 degrees, in light to moderate westerly winds.

THURSDAY: Turning wet and blustery on Thursday with some heavy showery rain at times. Highest temperatures of 14 to 18 degrees, in fresh to strong southwest to west winds with gales off western and northwestern coasts.

FURTHER OUTLOOK: Turning cooler and unsettled for Friday and the weekend, with showery out breaks of rain in a blustery northwest airflow as low pressure continues to dominate. 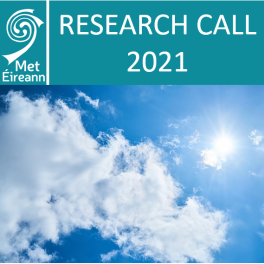 Research funding is a key component of Met Éirean...

Climate Statement for Summer and August 2021 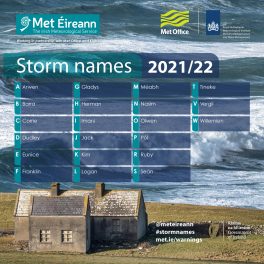 Met Éireann, along with the Met Office and KNMI &...

Do you like to listen to the weather forecast? Met...