The Global Annual to Decadal Climate Update is issued annually by the World Meteorological Organization (WMO). It provides a synthesis of the global annual to decadal predictions produced by the WMO designated Global Producing Centres and other contributing centres for the period 2022- 2026. Latest predictions suggest that:
• The annual mean global near-surface temperature for each year between 2022 and 2026 is predicted to be between 1.1°C and 1.7°C higher than preindustrial levels (the average over years 1850-1900).
• The chance of global near-surface temperature exceeding 1.5°C above preindustrial levels at least one year between 2022 and 2026 is about as likely as not (48%). There is only a small chance (10%) of the five-year mean exceeding this threshold.
• The chance of at least one year between 2022 and 2026 exceeding the warmest year on record, 2016, is 93%. The chance of the five-year mean for 2022-2026 being higher than the last five years (2017-2021) is also 93%.
• The Arctic temperature anomaly, compared to the 1991-2020 average, is predicted to be more than three times as large as the global mean anomaly when averaged over the next five northern hemisphere extended winters.
• Predicted precipitation patterns for 2022 compared to the 1991-2020 average suggest an increased chance of drier conditions over southwestern Europe and southwestern North America, and wetter conditions in northern Europe, the Sahel, north-east Brazil, and Australia. Full report here 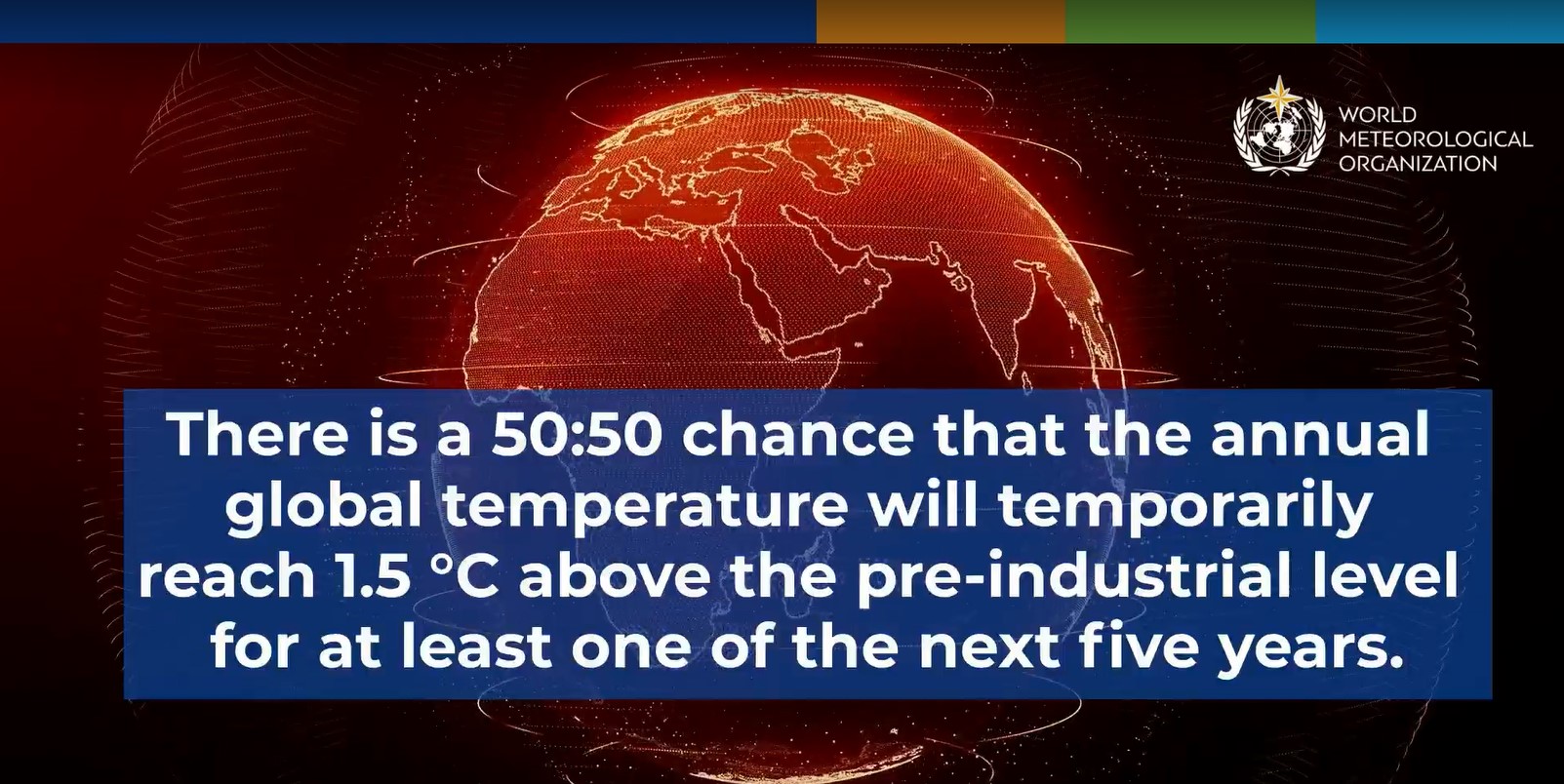 Latest future climate projections for Ireland indicate the mean annual temperature is projected to increase by 1 – 1.2°C and by 1.3 – 1.6°C for the RCP4.5 and RCP8.5 scenarios, respectively. These projections are annual temperature changes for 2041 – 2060 relative to 1981 – 2000. Temperature projections show a clear west-to-east gradient, with the largest increases in the east.
As our planet warms, so does our atmosphere. Warmer air has the ability to hold more moisture. In Ire-land, we have seen an increase in average annual rainfall by about 6% over the last 30 years (compared to the previous 30 years).
Latest future climate projections for Ireland indicate a decrease in mean rainfall by mid-century; a decrease in mean annual and spring and summer rainfall (Nolan and Flanagan, 2020) while heavy rainfall events are expected to become more frequent. Rainfall is expected to become more variable, with projected increases in frequency of both heavy rainfall events and dry periods also. These projections are in line with those carried out previously (e.g. Nolan 2015, Nolan 2017).
These projections were downscaled from CMIP5 output of the EC-Earth global climate model (Hazeleger 2012). 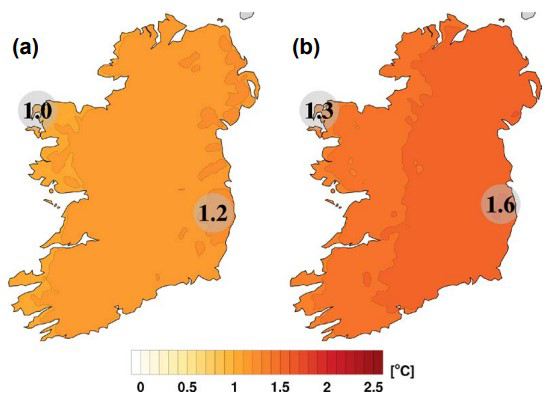 Ensemble mean of projections of 2-m temperature change for the (a) RCP4.5 and (b) RCP8.5 scenarios. In each case, the future period, 2041–2060, is compared with the past period, 1981–2000. The numbers included on each plot are the minimum and maximum projected changes, displayed at their locations. Nolan P, Flanagan J (2020) Research 339: High-resolution Climate Projections for Ireland. A Multi-model Ensemble Approach. EPA report 339