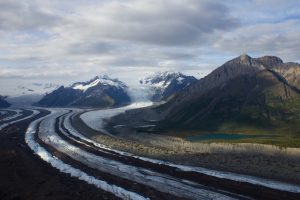 Kennicott Glacier, in the Wrangell-St. Elias Mountains of Alaska. All images: Noel Fitzpatrick.

The ongoing and future retreat of glaciers and ice sheets is a key indicator of climate change, and is frequently mentioned in media articles discussing the response of the planet to rising temperatures. It has been around 10,000 years since glaciers last graced the Irish landscape; carving out the u-shaped valley of Glendalough, scouring the limestone pavement of the Burren, and depositing the drumlins that form the many islands of Clew Bay. Considering our current separation from these icy features, why should those of us in glacier-free regions of the world be concerned by their loss? 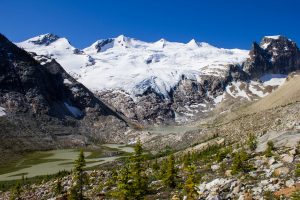 The retreating Nordic Glacier, in British Columbia, Canada. The glacier once filled this valley, with the top of the gravel bank (called a moraine) on the right of the picture marking the level of its former height.

Let’s begin by considering what a glacier is. A glacier is an accumulation of ice, snow and rock that flows downhill like a very slow-moving river. They form in the high mountains and polar regions of the Earth, where the climate conditions (e.g. average temperatures, precipitation rates) allow for snow to accumulate on the ground from one year to the next. Over time, this build-up of snow gradually gets squeezed or compressed into ice by the weight of the snow on top. The growth of a glacier is essentially a balance between how much goes in i.e. snow, and how much goes out i.e. melting. If more snow and ice is added to a glacier than is melted, the glacier grows; if more ice melts than is replaced by snow, the glacier shrinks. Think of it as a bank account; lodge more money than you withdraw, and your account grows, and vice versa. Warming climate conditions over the last 150 years have been taxing on the accounts of glaciers, removing ice faster than it can be replaced by snowfall, resulting in their observed, widespread retreat. Of the over 200,000 glaciers worldwide, almost all are currently shrinking.

Considering their sensitivity to atmospheric conditions, glaciers help us to measure and understand past and present changes in our climate. They leave marks on the landscape that tell us where and when they existed, and how their size has changed. The current rapid decline of the world’s glaciers is an indication that our climate system is out of balance, driven by high levels of carbon dioxide in our atmosphere. Looking further into the past, scientists have been able to sample air from thousands of years ago that was locked into small bubbles in the ancient ice of Antarctica. These samples have shown that the current level of carbon dioxide in our atmosphere, and the rate at which it has increased since the industrial revolution, is greater than anything over the last 800,000 years, at least.

Polar and high altitude regions are warming substantially faster than the global average, leaving much of the planet’s snow and ice vulnerable to ongoing and future changes in climate. As a Ph.D. researcher, I worked in the mountains of Western Canada, installing weather stations, melt sensors, and time-lapse cameras on glaciers. Using the measurements from these systems, we could examine how different weather conditions affect the rate at which a glacier melts. By understanding how a glacier melts, we can better predict how they may respond to a warmer climate, and the speed and extent of their retreat in the future.

Time-lapse video of a weather station on the melting surface of Conrad Glacier, British Columbia, over a 7-week summer period. 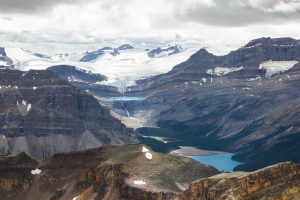 Melt-water from Bow Glacier feeding into the rivers and lakes of the Rocky Mountains, Canada, during the summer season.

In addition to being good indicators of climate change, glaciers themselves have a wide-reaching influence on the natural world and human society. On a local scale, mountain glaciers act as water reservoirs; storing water as snow and ice during cool, wet periods, and releasing water during warm, dry seasons through melting. This helps maintain the flow in rivers downstream from glaciers during summer months. Some of the Earth’s most densely populated communities in North and South America and Asia depend on melt-water fed rivers. The change in flow of these rivers, brought on by the loss of glaciers, may have a substantial impact on local freshwater supply, irrigation, hydroelectric power production, and flood frequency. Glacier melt-water can also impact the health of the ecosystems reliant on these rivers. The cooling effect of melt-water helps to reduce river temperatures during the spring and summer, limiting the growth of water-borne parasites and viruses. For example, the huge migrations of salmon to spawning grounds on the rivers of the Pacific coast of North America are highly sensitive to water temperature. A decline in salmon numbers due to warmer temperatures will have a knock-on effect on the numerous animal populations and indigenous communities that have relied on this food source for thousands of years.

On a global scale, the level of our oceans is rising. Water that had been stored on land in glaciers and the great ice sheets of Antarctica and Greenland is now being released to the sea, generating about half of the recently observed sea level rise (the other half is due to the expansion of water as it warms). Over the course of the 21st century, sea levels are likely to rise by at least half a metre, and this could increase substantially if the Antarctic and Greenland ice sheets were to begin to collapse. Half a metre may not sound like a lot, but some low-lying communities are already experiencing major infrastructural issues due to higher water levels, such as the island nations of the Pacific and Indian Oceans, and large cities like Miami. Rising sea levels are also increasing flood risk in our own coastal towns in Ireland, particularly during high tides and storm events. With increased risk and damage comes the increased cost of insurance premiums, housing relocation, flood defenses and infrastructure repair. Enhanced erosion is also threatening recreational, agricultural, and ecological areas all along our coastline. 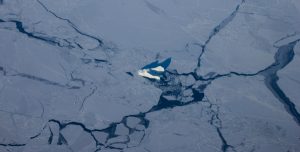 An iceberg, broken from the edge of a coastal glacier, drifts through sea ice near Greenland.

Glaciers, and snow and ice in general, can also play a role in regulating the amount of energy absorbed by the Earth from the Sun. Surfaces covered in snow or ice are often white or brightly-coloured, making them naturally reflective to sunlight. Therefore, much of the energy hitting these surfaces will be reflected back into space, helping to keep temperatures cool. If there is a reduction in the amount of the Earth’s surface covered by snow or glaciers or sea ice (as is currently happening), more of the Sun’s energy can be absorbed, warming up the ground and oceans. As temperatures increase, more snow and ice melts. This allows more energy to be absorbed, further temperature increases, and continued snow and ice loss. This kind of looped process is known as a climate feedback, and is one of many important chain reactions that can occur as our planet continues to warm.