Overcast with outbreaks of rain and drizzle at times this afternoon. More prolonged rain will spread from the southwest later this evening, becoming heavy in the west and southwest. Highest afternoon temperatures of 6 to 10 degrees generally, mildest in the southwest.

Widespread rain tonight, heaviest and most persistent across the west and north midlands with some local flooding possible. Lowest temperatures of 6 to 9 degrees, colder however over Ulster with lows of 2 to 5 degrees here. Light southwest or variable breezes will increase fresh southwesterly, extending to all but Ulster and north Connacht by morning.

A wet, breezy morning with widespread rain, heaviest over the northern half of the country with a continued risk of localised flooding. Rain will be more intermittent and showery in the south during the afternoon, but still with some heavier bursts at times. A cold day for Ulster with afternoon high temperatures of just 3 to 6 degrees, but milder elsewhere with highs of 7 to 11 degrees. Winds will be fresh southwesterly over the bulk of the country and strong on coasts, with light northerly winds in the north. 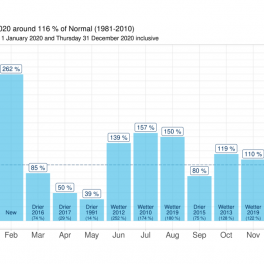 The weather and climate of 2020 shows above averag 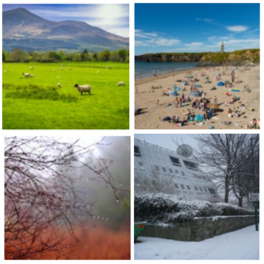