According to data published by the WMO- in their provisional WMO State of the Global Climate 2021 report the past seven years 2015 to 2021 are on track to be the seven warmest on record based on data from the first nine months of 2021. The global cooling influence from La Niña at the start of this year in the tropical Pacific is expected to keep 2021’s final temperature value between the fifth to seventh warmest year since 1850. The last significant La Niña event was in 2011 and 2021 is around 0.18°C to 0.26 °C warmer than 2011.

The world’s global mean temperature for 2021 based on data from January to September has increased about 1.09 degrees Celsius above pre-industrial levels. 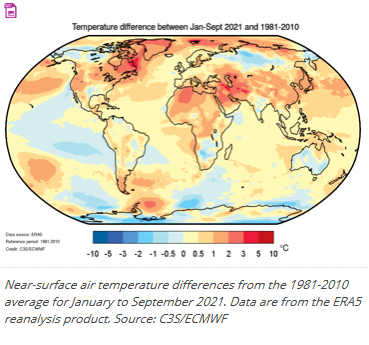 Observations in Ireland are generally consistent with the global situation. Measurements going back over the past 120 years have shown in a recent report that the annual average air temperature in Ireland is trending upwards also with an increase of 0.9 degrees Celsius over the last 120 years Link to Full Report.