There were intense thunderstorms especially on the 1st and 8th June, but in general the dry, settled weather from the end of May continued for the first two weeks of June with high pressure in charge and a slack easterly flow. The north Atlantic jet stream stayed well to the north. There was a break in the fine weather for the third week of the month. Storm Hector passed close to the Northwest, giving two days of rain and gales on the 13th and 14th followed by frontal systems crossing the country from the west up to the 20th. Even during this unsettled spell, rainfall totals were very low especially in the South and East. From the 21st, the remainder of the month and first part of July was settled and exceptionally dry due to an area of high pressure building over Ireland. Heat wave and partial drought conditions were reported in many locations. Absolute Droughts are now ongoing.

On June 21st, an area of high pressure of up to 1035 hPa was centred to the west of Ireland bringing a northwesterly air flow across Ireland. In the days that followed, an easterly airflow dominated our weather. As high pressure persists over Ireland, it has brought the warmest conditions so far in 2018, with the highest maximum temperature of 32.0°C recorded at Shannon Airport on the 28th June.

Five Synoptic stations in the West and South had a max temp of over 30°C on the 28th June 2018. These were Shannon Airport, Mount Dillon, Claremorris, Athenry and Moore Park. On 29th June, Shannon Airport was the only station which recorded above 30 °C with a temperature of 31.1 °C.

The weather for June and early July 2018 has been warm and dry with mean temperatures 1.8 °C above normal on average and rainfall just 50% of normal in the west and as low as 5% of normal in the east. This follows on from what was a dry and warm May.

Official heatwaves were recorded at thirteen Synoptic stations this year, (See table below). These occurred in the East, the Midlands, the West and the South. 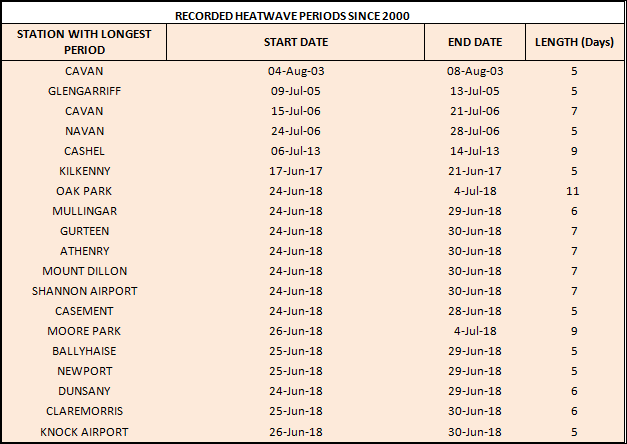 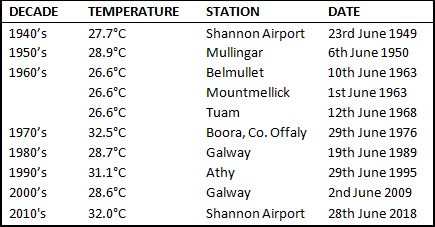 Soil moisture deficits are now over 55mm in the West and North, over 75mm in the South and over 85mm in the East and Southeast. 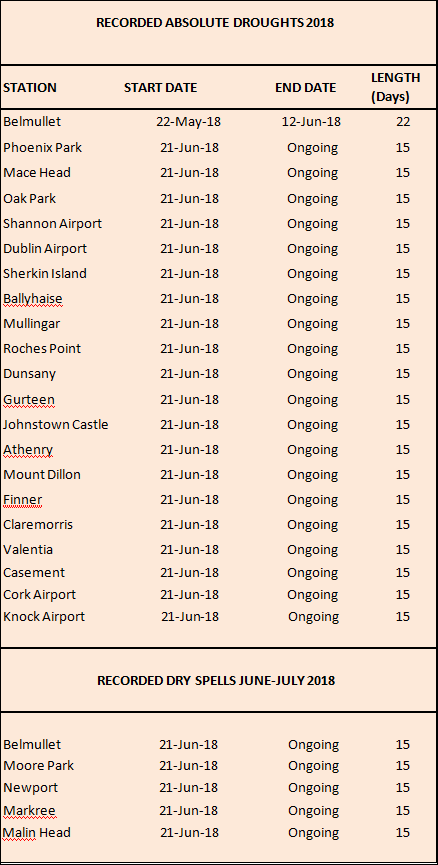 What is a heatwave?

A heatwave refers to a prolonged period of abnormally hot weather which may be accompanied by high humidity. While there is no generally accepted definition of a heatwave, in Ireland it’s classified as 5 consecutive days with a maximum temperature in excess of 25 degrees Celsius.

Why and when do heatwaves happen?

Heatwaves are most common in summer when high pressure develops over the country. High pressure systems, also known as anticyclones, are slow moving and can persist for a prolonged period of time, resulting in dry and settled weather. In anticyclones, cool air descends from aloft and diverges outwards at lower levels. As the air descends it is warmed by compression. The position of the jet stream over Ireland determines the type of weather we experience. When a high pressure system materialises over Ireland, the jet stream is usually located to the north of us and keeps low pressure systems away. 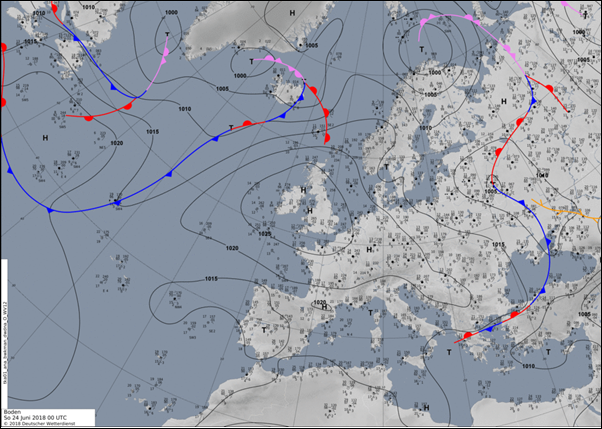 Different air masses affect us at different times of the year and this has a major impact upon the weather we experience in this country. The Tropical Continental air mass is the least frequent air mass affecting Ireland and is most common in summer when sub-tropical high pressure moves north. This air mass originates over North Africa and tracks northwards over continental Europe. Although the lower layers of this air mass are usually quite stable, the unstable upper layers may give rise to severe thunderstorms.  Its low humidity tends to bring us clear skies and long periods of sunshine. The highest temperatures experienced in Ireland usually occur under the influence of this air mass giving maximum temperatures in excess of 30 °C.

Ireland only experiences occasional heatwaves which are usually less frequent and not as prolonged as those found in more southerly latitudes. In August 1976, Birr recorded heatwave conditions lasting 14 days. More recently, heatwave conditions occurred in the summers of 2017, 2013, 2006, 2003, 1995, 1989 and 1983.