The recent prolonged Siberia heat from January to June 2020 would have been almost impossible without the influence of human-caused climate change, according to a rapid attribution analysis by a team of leading climate scientists.

The WMO report that researchers from international universities and meteorological services from the Russian Federation, France, Germany, Netherlands, Switzerland and the United Kingdom also found that temperatures were more than 2°C hotter than they would have been if humans had not influenced the climate by releasing greenhouse gas emissions.

Temperatures in Siberia have been more than 5°C above average from January to June, and in June up to 10°C above average. This has contributed to the first half of the year being the second warmest on record. A temperature of  38°C was recorded in the Russian town of Verkhoyansk on 20 June. WMO will now verify whether this is a new record temperature north of the Arctic Circle and establish a corresponding new category in its Global Weather and Climate Extremes Archive.

To measure the effect of climate change on these high temperatures, the scientists contributing to the World Weather Attribution (WWA) initiative ran computer simulations to compare the climate as it is today, with about 1°C of global warming, with the climate as it would have been without human influence, using the same methods as in past rapid and peer-reviewed studies.

“In many previous studies we have seen hot spells and heatwaves become hotter and more frequent around the world, consistent with our scientific understanding. In places such as Siberia, a hotter climate can have devastating effects, not just on the local wildlife and people who live there, but also on the world’s climate system as a whole, for example through thawing permafrost, reduced snow cover and melting ice,” said the World Weather Attribution scientists.

Their analysis showed that prolonged heat like Siberia experienced from January to June this year would only happen less than once in every 80,000 years without human-induced climate change – making it almost impossible in a climate that had not been warmed by greenhouse gas emissions. Climate change increased the chances of the prolonged heat by a factor of at least 600. This is among the strongest results of any attribution study conducted to date and is unequivocal evidence of the influence of human-induced climate change on the planet.

The scientists noted that even in the current climate the prolonged heat was still unlikely: such extreme conditions can be expected to occur less than once every 130 years. But without rapid cuts in greenhouse gas emissions they risk becoming frequent by the end of the century.

You can read the full WMO news article here.

Here in Ireland the latest Irish climate change models suggest that by mid-century the Irish climate will continue to become milder. This suggests hot days will get warmer, cold nights will get warmer, the number of frost days is projected to decrease while the average length of the growing season will increase. The average temperature in Ireland has already risen by almost 1 degree since 1900. We would also expect to see likely decreases in spring and summer rainfall and more heavy rainfall events in autumn and winter. 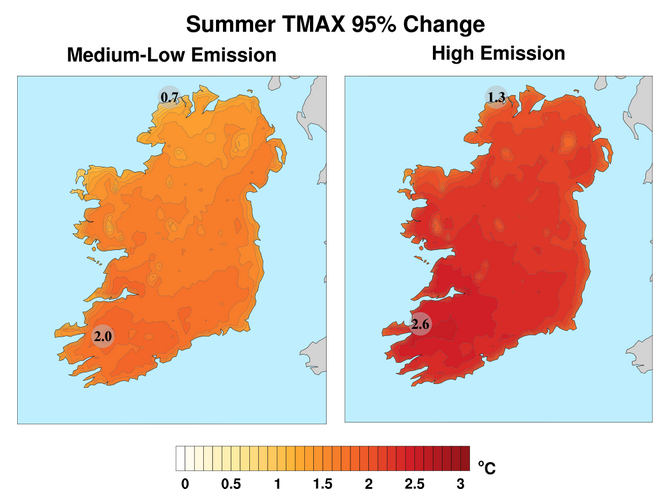 Figure 2: Projected changes in the top 5% of maximum daytime summer temperatures for the medium-low and high emission scenarios.

In each case, the future period 2041-2060 is compared with the past period 1981-2000. The numbers included on each plot are the minimum and maximum increases, displayed at its location. Full report here.

Met Éireann are also a member of the European consortium EC-EARTH. EC-EARTH members contribute to the developing and running of global climate models that help inform IPCC reports while continually improving our knowledge of our warming world.