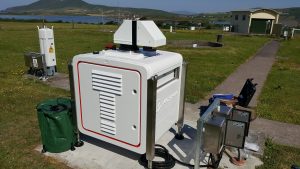 Met Éireann’s first Doppler Lidar (Light Detection and Ranging) instrument was delivered to Valentia Observatory in Caherciveen, Co. Kerry in July of this year (see photo on the right).

How does a Doppler Lidar work?

A Doppler Lidar uses an infrared laser beam to detect distant objects – in this case aerosols (e.g. soot, volcanic ash, sea-salt) and cloud particles (liquid cloud droplets and ice crystals). When the beam strikes moving objects (aerosol and cloud particles) its frequency or wavelength changes. Measurements of the change in frequency, known as a Doppler shift, in the reflected or back scattered laser beam provide information on the speed of the distant objects and hence on the winds.

More specifically, the back scattered beam is collected by the instrument, converted to an electronic signal and sent to a computer. A special processing algorithm is  then used to determine the Doppler shift of the back scattered radiation from which the radial winds along the line of sight of the Lidar can be deduced. Conical scanning provides additional information. The delay between the outgoing laser pulse and the back scattered signal provides information on the distance to the scattering object, and hence, the height of the measured winds. 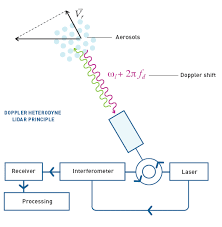 The Doppler Lidar instrument at Valentia Observatory is used to complement the current upper air radiosonde measurements. These are carried out using weather balloons filled with helium which are released at the Observatory twice daily and travel to heights of up to 30 km in the atmosphere. An advantage of radiosondes is that they record temperature and humidity profiles of the atmosphere as well as winds. On the other hand, the Doppler Lidar provides near real-time wind speed and direction profiles of the lower atmosphere up to a height of 3 km. The Lidar also provides information on aerosols, clouds and the height of the planetary boundary layer and the mixing within it.

In the future, this Doppler Lidar will be part of Irish and European networks of Doppler Lidars. Collaborative efforts within such networks will advance the provision of quality-controlled data for use in the data assimilation components (i.e. algorithms which make use of weather observations) of weather forecasting models.