Met Éireann is the Irish National Meteorological Service as recognised by the World Meteorological Organisation under an international convention since 1950 and one of its most important roles is to protect life and ensure citizen safety. The service also supports the activities of the citizen and other agencies to mitigate damage to property and reduce disturbance to economic activity and so enhance support for impact-based decision making for weather events.

Met Éireann’s main suite of warnings are issued by the duty forecaster between 10am and midday and are updated as necessary as new information becomes available. In general, warnings will not be issued more than 60-hours ahead of the expected adverse weather but advisories on potential hazards are issued up to a week in advance.

Impacts from wind/rain/snow etc., vary depending on location, recent weather conditions, the state of ground, the time of year as well as the duration of the event. In particular the timing and location of the occurrence of extreme weather can significantly affect the impact which extreme weather may have on society, or on the economy.
The colour coding used by Met Éireann is fully aligned with international best practice and the European Meteoalarm system (www.meteoalarm.eu) 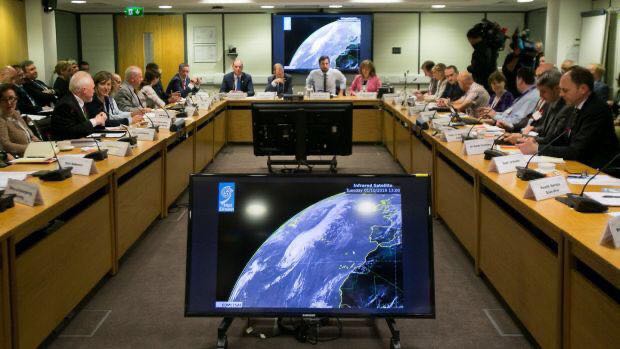 Met Éireann provides the weather briefings at the NECG, which brings together all Government Departments and relevant agencies and organisations, to support the locally led response and ensure coordination across the “Whole-of-Government” for the duration of the emergency.

Weather Advisories are issued up to about a week ahead to provide early information on potential hazardous weather. They may also be employed when a sum of weather elements acting together create a significant hazard, e.g. winds which may not be up to warnings strength but which, when combined with high tides and significant swell, generate a risk of flooding. Another possible use would be to advise of wind speed and direction on occasions of Volcanic Ash contamination. They might also be used to advise of expected significant medium-term accumulations of rain during a very unsettled period, when soils are known to be saturated. The issue of Weather Warnings and Weather Advisories is at all times down to the judgement of the Met Éireann Meteorologists/Forecasters.

When Will The Weather Warnings Be Issued?

In general Weather Warnings will be issued whenever weather conditions meeting the detailed thresholds defined below are anticipated within a 60-hr period. There will be judgement required on the part of the forecaster who must weigh up the possible severity of the weather conditions and the likelihood of their occurrence. However on some occasions (weekends, holiday periods) it may be necessary to issue Weather Warnings beyond this 60-hr horizon, if sufficient certainty derives from examination of the weather charts. Normally, however, a Weather Advisory (see above) will be used to flag severe weather beyond 60 hrs and Advisories will normally anticipate only “Orange” or “Red” criteria weather hazards.

Given that the thrust of the Weather Warnings service is on potential “Impacts” of weather rather than on the numerical values attained by the weather elements themselves, it may on occasion be appropriate to issue warnings at a level higher than that strictly justified by the anticipated weather elements. An example would be when heavy rain was expected which might not quite meet the “Orange Warning” criteria but which might give rise to significant flooding because of already saturated ground, or because of a combination of rain, wind and tide in a coastal location.

IMPACT CONSIDERATIONS: These numerical criteria are strong guidelines but impacts from wind/rain/snow etc., vary depending on location, recent weather conditions, the state of ground, the time of year as well as the duration of the event. In any individual weather event, not every location in the warning area may experience the same degree of weather or impacts. When severe weather is expected, weather and impacts at lower levels are also likely to be experienced. 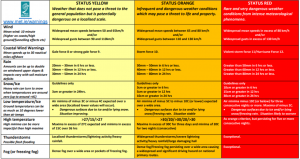 As part of our warnings expansion and developments, Met Éireann will now be issuing Small Craft Warnings and Gale warnings for the period 24-hours to 54-hours ahead. These will be displayed on the Warnings page using the new 3-Tab display system. Please subscribe to receive push notifications of these Marine warnings through the Met Éireann App. Emails of Marine warnings are also available to subscribe to, register here.

Naming storms by National Meteorological Services has been shown to raise awareness of severe weather. It provides a clear, authoritative and consistent message to the public and prompts people to take action to prevent harm to themselves or to their property.

Met Éireann, the UK Met Office and KNMI (Netherlands) collaborate in forecasting and naming storms. The names are chosen from public suggestions and are in alphabetical order, alternating between genders.

A storm is named by a National Meteorological Service when Orange Level wind warnings are forecast to impact over a wide area overland. Orange or Red level gusts can occur in exposed areas without the event being named. 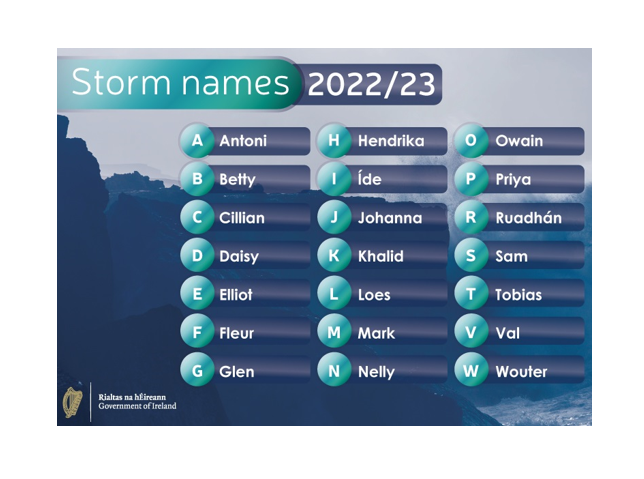 More information is available on our Storm names page

Met Éireann display current weather warnings for Northern Ireland. This is to provide a clear, authoritative one-stop shop for easy and reliable access to the latest weather warnings for the Island of Ireland. In particular it is hoped that this all-Ireland warnings display will promote citizen and societal safety in border regions.

An Orange warning is referred to as Amber for Northern Ireland as this is the colour coding used by the UK Met Office, as in Yellow/Amber/Red, as opposed to the labels Yellow/Orange/Red as used by Met Éireann.

Given our close geographical locations and frequently shared weather systems, Met Éireann and the UK Met Office have ongoing collaboration on the forecasting and naming of storms.

If a spell of mild and humid weather conditions is forecast to last long enough for potato blight spores to develop and subsequently spread to nearby plants a Blight Warning will be issued by the duty forecaster in Met Éireann.

The blight forecasting method used in Ireland is based on the Bourke Rules, summarised as follows:

If 10 to >12 or more Effective Blight Hours are expected a BLIGHT WARNING is issued.

DRY SPELL: A dry spell is a period of 15 or more consecutive days to none of which is credited 1.0 mm or more of precipitation.

ABSOLUTE DROUGHT: An absolute drought is a period of 15 or more consecutive days to none of which is credited 0.2 mm or more of precipitation.

PARTIAL DROUGHT: A partial drought is a period of at least 29 consecutive days, the mean daily rainfall of which does not exceed 0.2 mm. 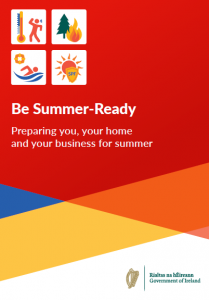 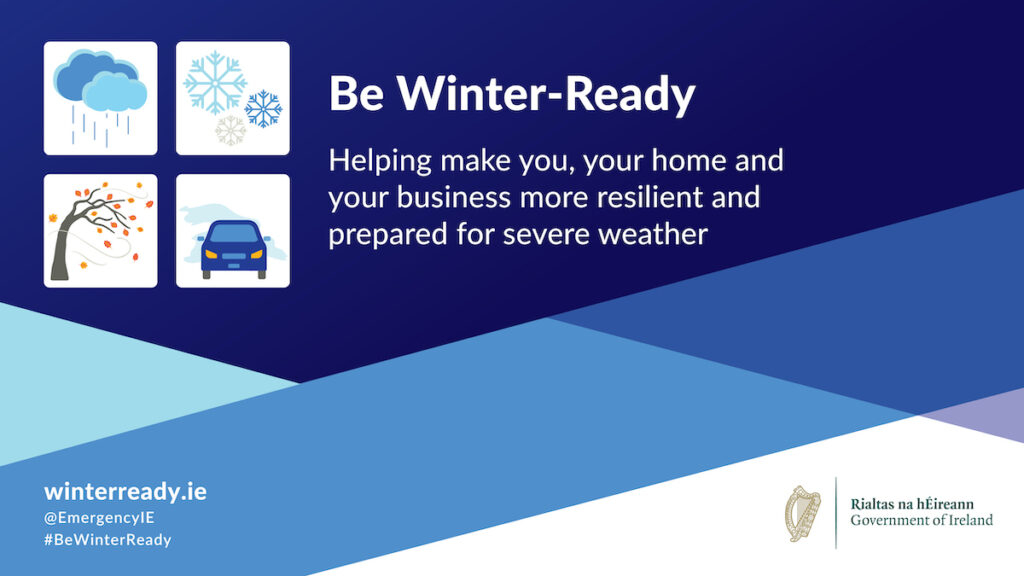 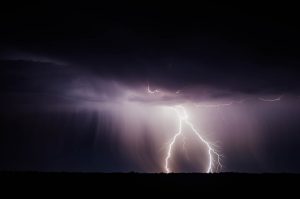 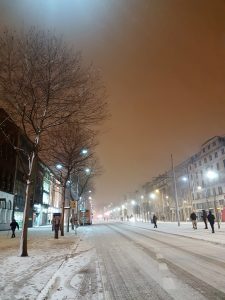 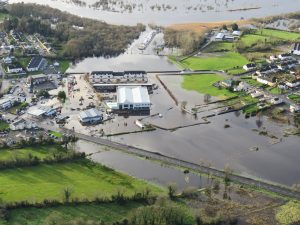 Hazard
A hazard is defined as a hydro-meteorological, geophysical or human-induced element that poses a level of threat to life, property or the environment.

Impact
An impact describes the expected damage due to a hazard.

Exposure
Exposure refers to who and what may be affected in an area in which hazardous events may occur. If the population and economic resources were not located in (exposed to) potentially dangerous settings, no disaster risk would exist. Exposure is a necessary, but not sufficient, determinant of risk. It is possible to be exposed, but not vulnerable, for example, by living on a floodplain but having sufficient means to modify building structure and behaviour to mitigate potential loss. However, to be vulnerable to a hazard, it is also necessary to be exposed. Exposure is time (t) and space (x) dependent.

Risk
Risk = Probability of hazard event * consequences (vulnerabilities) * exposure. Risk is defined as the probability and magnitude of harm attendant on human beings and their livelihoods and assets because of their exposure and vulnerability to a hazard. The magnitude of harm may change due to response actions to either reduce exposure during the course of the event or reduce vulnerability to relevant hazard types in general.