Atmospheric pressure is an important parameter in monitoring the climate system, as the local and large-scale atmospheric circulation patterns are driven by differences in air pressure. The direction of airflow, above the layer affected by the frictional drag of the surface, is almost parallel to the isobars – lines connecting points of equal pressure. Near the surface, friction causes winds to blow across the isobars from high towards low pressure at an angle which depends on surface roughness but is typically about 25 degrees. It follows that maps of mean atmospheric pressure give a general indication of the predominant wind-flow over the country.

Pressure shows seasonal variation. The slackest pressure gradients occur in spring and summer, with a more defined North to South gradient in autumn and winter when pressure values are generally lower.

Atmospheric pressure is measured at synoptic weather stations. Historically pressure was measured by means of a mercury barometer, with the air pressure given by the height of mercury supported by the atmosphere in an evacuated tube, complemented by an aneroid barograph which gave a continuous graph of air pressure. Increasingly in recent years, due to station automation precision, aneroid barometers have replaced mercury barometers. These operate by means of an evacuated cell, which expands or contracts as pressure changes. At automatic weather stations, the output from the aneroid barometer is in digital format. 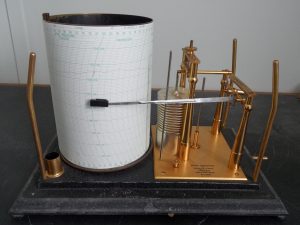 Air pressure at a point is the force per unit area exerted by the weight of air above it. This means that air pressure varies considerably with height, decreasing with increasing elevation. To allow for comparison between measurements at different locations, all pressure readings are converted to mean sea level pressure. This means that the altitude of each station measuring pressure must be known precisely.

The unit of pressure is the pascal (Pa), as this is a small unit of pressure, in meteorological practice the hectopascal (hPa) is used (1hPa=100Pa). Lines of equal pressure drawn on a weather map are called isobars. As well as being an important climate variable, pressure is an important variable in describing day to day weather variation and in weather forecasting and modelling.

Time Series and Trends: Pressure varies considerably according to the movement and development of large scale pressure systems, there are also seasonal variations and smaller diurnal variations. The mean annual pressure series show little variation, maximum and minimum series show greater variability, particularly the minimum values which is due to the frequency of mid-latitude cyclones.