A new set of mid-21st-century (2041-2060) high-resolution climate projections for Ireland have been published, taking a multi-model ensemble approach in order to better quantify the inherent uncertainty associated with such projections (Nolan and Flanagan, 2020). This research was carried out by the Irish Centre for High-End Computing (ICHEC) on behalf of the Environmental Protection Agency (EPA) and supported by Met Éireann and the Marine Institute. A general overview of the report is presented here, with the full report available to download at: http://epa.ie/pubs/reports/research/climate/researchreport339/

Climate change represents an urgent and potentially irreversible threat to human societies globally, with increasing atmospheric greenhouse gas concentrations driving changes in all aspects of the climate system, including increases in the frequency and intensity of extreme weather events (Allen et al., 2018). Accurate climate projections are a key scientific input for national policymakers when planning for, and adapting to, such challenges. Such climate projections are produced using climate models, which scientists have developed over recent decades to simulate Earth’s past, present, and future climate.

Global Climate Models (GCMs) are used to model the global impacts on Earth’s climate of increasing greenhouse gas concentrations in the atmosphere. Due to computational constraints, long climate simulations using GCMs are currently feasible only with horizontal resolutions of ~50km or coarser (Nolan and Flanagan, 2020). This resolution is sufficient to obtain an accurate global picture of changes in Earth’s climate; however, it is insufficient to capture key small-scale atmospheric features on the scale of 1-10km, such as local convection and wind gusts. To adequately simulate such features, Regional Climate Models (RCMs) are needed. 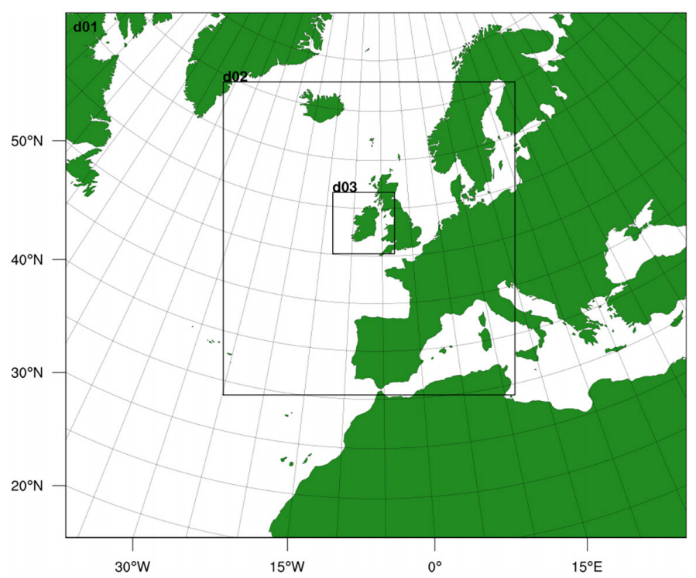 Using the output of GCMs as input, RCMs model regional climates at higher spatial resolutions, a process known as dynamical downscaling. Such an approach enables more precise modelling of a number of key climate variables, including: precipitation; near-surface temperature; and the number and intensity of low-pressure systems (Zappa et al., 2013). The added value of RCMs in the modelling of low-pressure systems is of particular importance for Ireland, as they are the primary driver of precipitation and wind affecting the country.

While dynamically downscaling GCM output using an RCM allows for more precise modelling, a climate model is nevertheless, by its very nature, an approximation of the full complexity of the climate system. In this study, a number of CMIP5 (Coupled Model Intercomparison Project – Phase 5, Taylor et al., 2012) GCMs were first run at a spatial resolution of ~125km or coarser and subsequently downscaled to a spatial resolution of ~4km over Ireland using three high-resolution RCMs; this allowed for partially quantifying the associated model uncertainty.

The resulting multi-model ensemble was first run for a reference period 1981-2000. Gridded datasets of observations at 1-km resolution covering Ireland (Walsh, 2012) for the period 1981–2000 were obtained from Met Éireann and used to validate the modelled reference period. Once validated, a statistical analysis of the resulting ensemble of downscaled projections allowed for the uncertainty in these projections to be partially quantified.

It is important to note that these trajectories do not constitute predictions of future concentration values as such, but rather plausible potential future values. For this study two RCPs were chosen, RCP4.5 and RCP8.5. RCP4.5 is considered an intermediate scenario, while RCP8.5 is currently considered to be representative of a potential worst-case scenario. In choosing these two RCPs, this study allows downstream users of the resulting climate projection data to assess potential future impacts as a function of varying greenhouse gas concentrations. 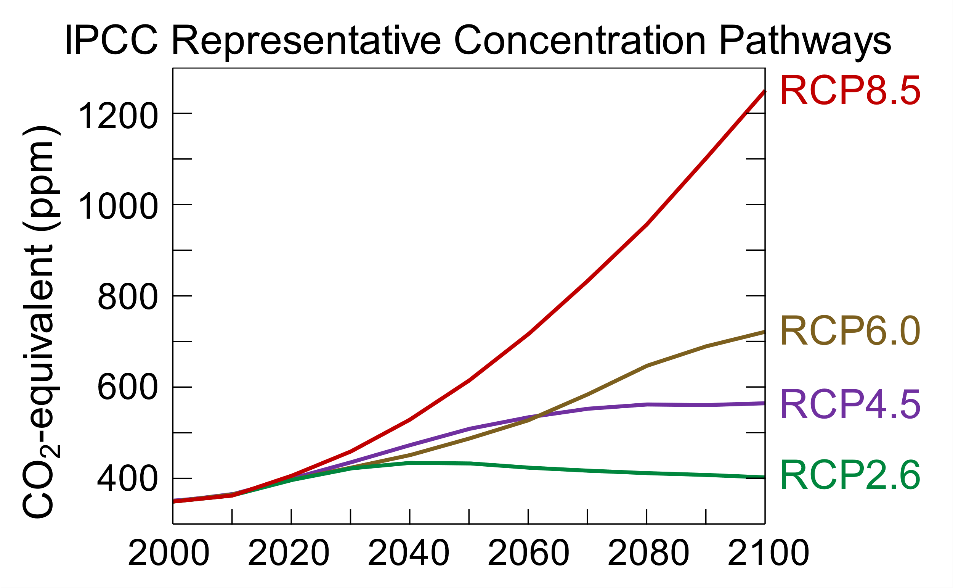 Figure 3: All forcing agents’ atmospheric CO2-equivalent concentrations (in parts-per-million-by-volume (ppmv)) according to the four RCPs used by the fifth IPCC Assessment Report (Efbrazil, 2020)

The results of the climate modelling reported are in broad agreement with numerous previous studies (Nolan 2015, Nolan et al 2017). In summary, for Ireland it was found that by mid-century (2041-2060):

Figures 4 and 5 show mid-century projections for 2-m temperature changes and mean precipitation changes, respectively. For more detailed results, the reader is referred to the report (Nolan and Flanagan, 2020), which also presents additional projections of climate fields and derived variables that are of importance to sectors including agriculture, health, energy, biodiversity, and transport. 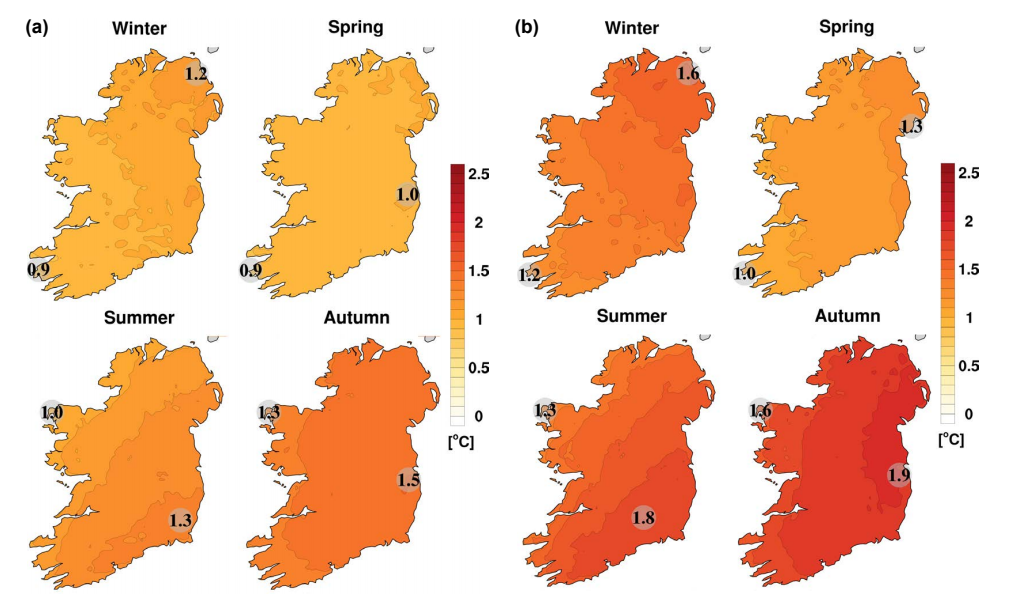 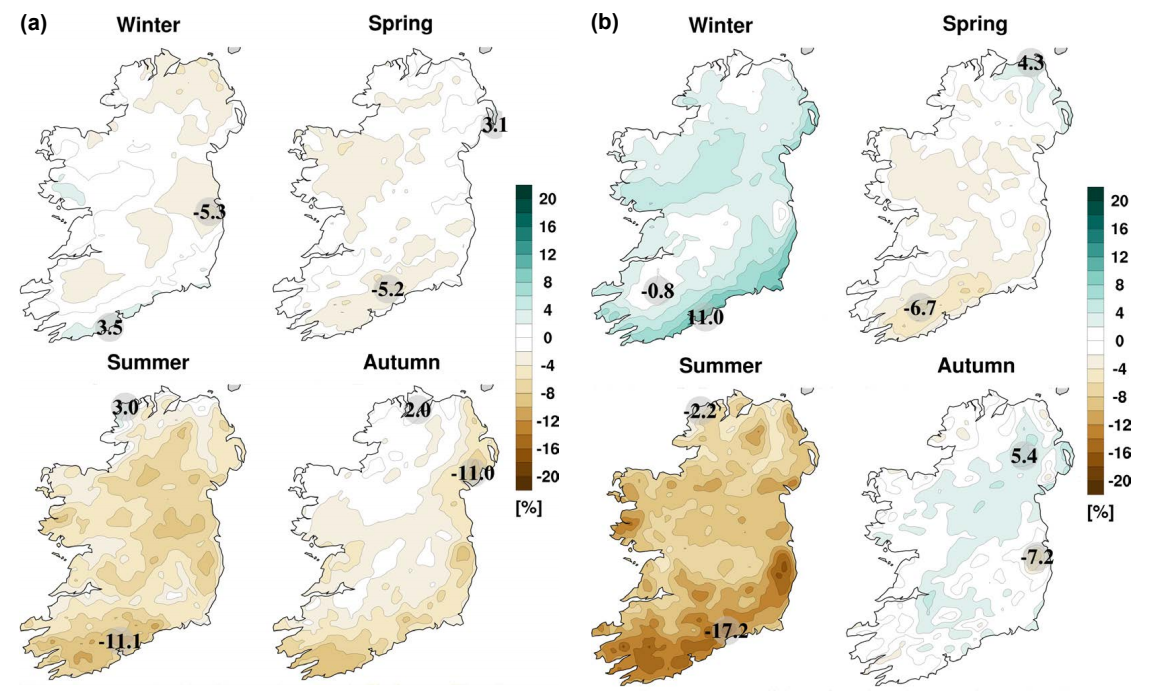 The study presented here focused on downscaling the output from a number of CMIP5 GCMs. Since this work was completed, simulations using the next generation CMIP6 GCMs (Eyring et al, 2016) have recently been completed. Downscaling the output from an ensemble of such CMIP6 GCMs for Ireland has already begun (http://www.epa.ie/pubs/reports/research/tech/researchreport310/). This new work focuses on downscaling the Scenario Model Intercomparison Project (ScenarioMIP) “tier 1” Shared Socioeconomic Pathways (SSPs), (Riahi et al., 2017) output, and will also extend the future period considered to include the full 21st-century.

In addition, Met Éireann is also coordinating a number of activities in the area of future climate research, including the standardisation of national climate projections for Ireland in collaboration with climate research groups across the country. Met Éireann is also currently working on developing a suite of climate services to meet adaptation requirements for a range of sectors across Irish society.

Doms, G. and Schättler, U., 2002. A Description of the Nonhydrostatic Regional Model LM. Part I: Dynamics and Numerics. Deutscher Wetterdienst, Offenbach, Germany