A weakened and disrupted stratospheric polar vortex through December, January and the first half of February allowed high pressure systems to develop in polar regions, which kept the North Atlantic Jetstream displaced to the south for the majority of winter, leading to cooler than average temperatures in Ireland. The re-strengthening of the stratospheric polar vortex for the second half of February led to the Jetstream moving north again and milder conditions returning. Troughs of low pressure repeatedly stalled over Ireland during December bringing widespread rain or showers for much of the month. A short dry period around Christ-mas was followed by Storm Bella on the 26th and 27th. The first third of January saw blocking high pressure keeping it mostly dry and cool with some wintry precipitation in places. The second third saw a more active Atlantic dominated spell with rain or showers on most days and storm Christoph affecting Ireland between the 18th and 20th. The final third saw a battleground scenario over Ireland with a cold block to the northeast and milder air to the southwest pushing weather fronts in over the country, giving heavy rain in places, and some wintry falls in the North. The first half of February was cool with slow moving low pres-sure for the first week giving way to cold easterlies for the second, with further wintry precipitation in places. The second half of February was mild with low pressure to the west sending active weather fronts over Ireland from the south with some flooding in places. The month finished sunny and settled with high-pressure building from the south.

Rainfall: Above average everywhere, highest in the South and East

Nearly all mean air temperatures were below their Long-Term Average (LTA) for the season. Deviations from mean air temperature for the season ranged from -0.8 °C (4.7 °C mean temperature) at Markree, Co Sligo to 0.1 °C (5.3 °C mean temperature) at Phoenix Park, Co Dublin. Mean temperatures for the season ranged from 4.2 °C (at its LTA) at Knock Airport, Co Mayo to 7.3 °C (0.4 °C below its LTA) at Sherkin Island, Co Cork (its coldest winter since 2011). The season’s highest temperature was reported at Phoenix Park, Co Dublin on Tuesday 23rd Feb with a temperature of 14.6 °C. The season’s lowest air minimum was -8.2 °C reported at both Mullingar, Co Westmeath and Dunsany, Co Meath on Saturday 9th Jan (both their lowest winter minimum since 2011) while the lowest grass minimum was -12.9 °C reported at Oak Park, Co Carlow also on Saturday 9th Jan. All stations reported air and ground frost during the season. The number of days with ground frost ranged from 21 days at Malin Head, Co Donegal to 56 days at Markree, Co Sligo. The number of days with air frost ranged from 5 days at Sherkin Island, Co Cork to 33 days at Mount Dillon, Co Roscommon.

Sunshine: Above average everywhere, highest in the South 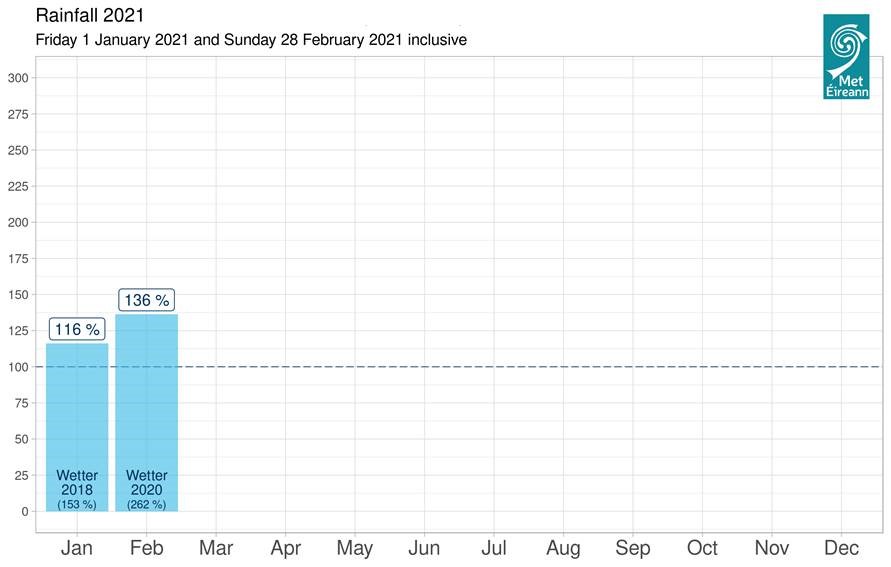