Hot and sunny with widespread heatwaves, dry in the west, wet in the East

July 2021 brought intense thundery rainfall at times, along with a prolonged hot and dry spell during the third and fourth weeks of the month, with heatwave conditions for many. The month started dry but low-pressure approached from the southwest and brought bands of rain or showers, sometimes heavy and thundery, across the country through most of the first week. A transient ridge of high pressure brought a mostly dry and cool start to the second week before low-pressure brought some rain or showers for a few days during the middle of the week. It became mostly dry from the 13th as the Azores high began to build from the southwest, bringing a very warm tropical maritime air mass over the country initially. A hot and dry tropical continental air mass was drawn up from the southeast between the 17th and 25th as the high-pressure system intensified over Ireland and the UK blocking any Atlantic weather fronts from approaching. This led to heatwave conditions in many places. There was some intense thunderstorm activity in places, especially in the North on the 21st and in the Midlands and West on the 23rd. The final six days of the month brought a return to Atlantic westerlies and low-pressure with rain or showers on most days, heavy and thundery in places, and average temperatures. Storm Evert, named by the UK Met Office, stayed mostly to the south of Ireland but brought some heavy rain to the South and East on the 29th and 30th.

All mean air temperatures across the country were above their Long-Term Average (LTA) for the month. Deviations from mean air temperature ranged from 0.5 °C (14.9 °C, the month’s lowest mean temperature) at Malin Head, Co Donegal to 2.3 °C (16.2 °C mean temperature) at Knock Airport, Co Mayo. Mean temperatures were as much as 17.8 °C (1.5 °C above its LTA) at Shannon Airport, Co Clare. All the month’s highest and lowest temperatures were recorded at Mount Dillon, Co Roscommon with both lowest air and grass minimum reported on Thu 1st with an air minimum temperature of 5.1 °C while the lowest grass minimum was -0.2 °C. The high maximum was reported on Wed 21st with a temperature of 30.8 °C (its highest maximum temperature for July on record (length 13 years)). There was no air frost reported this month. Mount Dillon, Co Roscommon was the only station to report ground frost on Thu 1st. It was the warmest July at most stations since 2013. Heatwaves were reported at 14 stations between Fri 16th and Sun 25th, with six stations reporting heatwaves lasting 10 consecutive days. These were Athenry, Co Galway, Claremorris, Co Mayo, Mount Dillon, Co Roscommon, Shannon Airport, Co Clare, Moore Park, Co Cork and Ballyhaise, Co Cavan. Valentia Observatory, Co Kerry reported two tropical nights (where the night-time temperature does not fall below 20 °C) on the nights of Wed 21st and Thu 22nd (a very rare occurrence in Ireland). Valentia also reported its highest July maximum temperature since 1976 with 28.3 °C on Thu 22nd. Six other stations along with Mount Dillon, Co Roscommon reported their highest July maximum temperature on record. These were Mace Head, Co Galway with 28.4 °C on both Wed 21st and Thu 22nd (length 16 years), Ballyhaise, Co Cavan with 28.9 °C on Wed 21st (length 16 years), Newport, Co Mayo with 30.0 °C on Wed 21st (length 29 years), Gurteen, Co Tipperary with 29.1 °C on Thu 22nd (length 13 years), Athenry, Co Galway with 29.5 °C on Sat 17th (length 11 years) and Knock Airport, Co Mayo with 28.0 °C on Wed 21st (length 23 years). 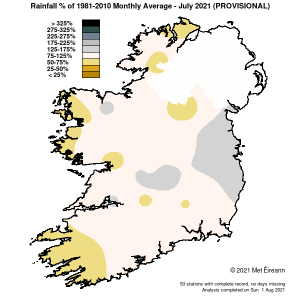 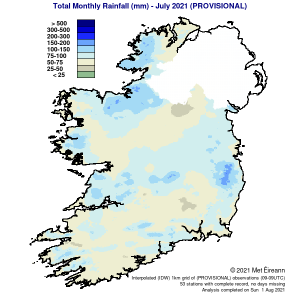