Recent January’s in Ireland were mild and wet.

January was a very dry month overall with above average temperatures. The first third of the month saw Atlantic low-pressure systems to the west and north in charge with several frontal systems crossing the country. The final two thirds of the month saw the jet stream move north, allowing high pressure to build from the south, bringing very dry conditions. The month began very mild with low-pressure to the west of Ireland bringing strong winds and bands of rain or showers, sometimes thundery, across country from the southwest. A few relatively dry days with cold northerly winds followed for the middle of the first week before low-pressure to the northwest steered several active weather fronts, interspersed with heavy showers, across the country from the west between the 6th and 8th. A steady rise in pressure from the south followed. The rest of the month was very dry with high pressure in control. The high pressure systems, centred mostly to the south and southeast of Ireland, brought varying amounts of sunshine, highest in the South and East. However, some weak weather fronts kept it cloudy at times, with some light rain and drizzle, especially in the Northwest. Low-pressure encroached from the north towards the end of the month with storm Corrie, named by the Met Office (UK), bringing windy conditions as it passed to the north of Ireland on the 30th.

All mean air temperatures across the country were above their Long-Term Average (LTA) for the month. This is the fifth consecutive month where all stations had above average monthly mean temperatures. Deviations from monthly mean air temperature ranged from 0.1 °C (5.4 °C mean temperature) at Dublin Airport, Co Dublin to 1.9°C (7.0 °C mean temperature) at Finner, Co Donegal. Mean temperatures for the month ranged from 5.1 °C (0.5 °C above their LTA) at both Mullingar, Co Westmeath and Dunsany, Co Meath to 8.2 °C at both Sherkin Island, Co Cork and Valentia Observatory, Co Kerry (0.6 °C , 0.9 °C above their LTA respectively) The month’s lowest temperatures were recorded on Monday 17th with the lowest air minimum reported at Mount Dillon, Co Roscommon with a temperature of -4.8 °C and the lowest grass minimum reported at Oak Park, Co Carlow with -9.2 °C. The highest maximum temperature was reported on New Year’s Day, Saturday 1st at Phoenix Park, Co Dublin with a temperature of 15.0 °C. All stations reported ground frost during the month. The number of days with ground frost ranged from 3 days at both Malin Head, Co Donegal and Belmullet, Co Mayo to 24 days at Phoenix Park, Co Dublin. More than half of stations reported air frost. The number of days with air frost ranged from zero days at a few stations to 10 days at Dunsany, Co Meath. Ten stations had their highest maximum temperature for January on record on New Year’s Day, Saturday 1st (record length ranging from between 11 and 72 years).

Sunshine: Sunny in the South and East, dull in the Northwest

Monthly mean wind speeds ranged from 4.8 knots (8.9 km/h) at Moore Park, Co Cork to 17.5 knots (32.4 km/h) at Malin Head, Co Donegal. Gales were reported on 11 days during the month with strong gales reported on the 1st, 6th, 7th, 8th and 29th. Storm force winds were reported on New Year’s Day, Saturday 1st at Belmullet, Co Mayo. The number of days with gales ranged from zero days at Dublin Airport, Co Dublin to 7 days at both Mace Head, Co Galway and Malin Head, Co Donegal. The number of days with up to strong gales ranged from zero days at most stations to 4 days at Mace Head, Co Galway. The number of days with storm force winds was 1 day at Belmullet, Co Mayo. Both the month’s highest gust and 10-minute mean wind speed was reported at Belmullet, Co Mayo on Saturday 1st. The highest gust was 65 knots (120 km/h) while the month’s highest 10-minute mean wind speed was 50 knots (93 km/h). 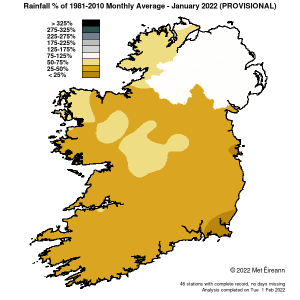 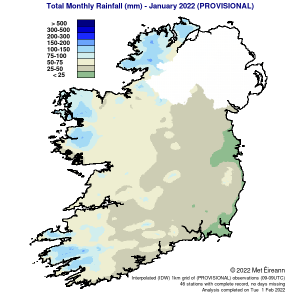