The first half of December 2022 saw very cold arctic air masses dominating, with high pressure to the north and the Jetstream displaced well to the south of Ireland, leading to drier than average conditions. The second half of the month was less cold with Atlantic low pressure systems dominating bringing wetter than average conditions. During the first week, high pressure, centred initially to the northeast over Scandinavia, brought a progressively cooler easterly airflow, after a relatively mild start. It was mostly dry apart from some heavy showers in Eastern and Southern coastal counties mid-week. High pressure moved from Scandinavia towards Greenland at the end of the first week, setting up a much colder northerly airflow for the second week. This brought wintry showers, mostly to windward facing coasts of the East and North, with lying snow in places, along with severe frosts and ice days (where the maximum temperature in a day does not rise above 0.0 °C), especially inland. The third week started cold and frosty before a very mild southerly airflow swept across the country on the 18th ending the cold spell. The final two weeks of the month saw Atlantic low pressure systems to the west and north in charge, bringing rain or showers on most days, in a mostly southerly to westerly airflow. The rainfall was especially widespread and heavy between the 23rd and 25th, thundery in places on the 24th, and again between the 28th and 30th with numerous active weather fronts crossing the country.

Rainfall: Below average in most places 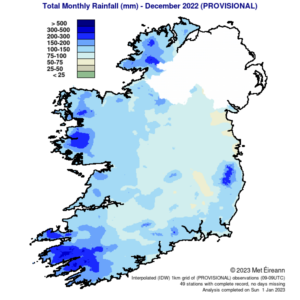 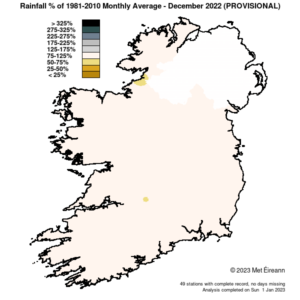 All mean air temperatures across the country were below their LTA for the month. Deviations from mean air temperature ranged from -2.7 °C (3.0 °C mean temperature) at Markree, Co Sligo (its coldest December since 2010) to -0.7 °C (5.7 °C mean temperature) at Malin Head, Co Donegal (its coldest December since 2011). Mean temperatures for the month ranged from 2.8 °C (2.2 °C below its LTA) at Mount Dillon, Co Roscommon (its coldest December since 2010) to 7.0 °C (1.0 °C below its LTA) at Sherkin Island, Co Cork (its coldest December since 2010). The month’s highest temperature was reported at Phoenix Park, Co Dublin on Monday 19th with a temperature of 15.0 °C. The month’s lowest air and grass minimum were recorded at Mount Dillon, Co Roscommon with the lowest air temperature reported on Friday 16th with -8.8 °C (its lowest minimum in December since 2010 and the lowest minimum in Ireland since December 2010), while the lowest grass minimum was -13.0 °C (its lowest grass minimum in December on record (length 18 years)) reported on Wednesday 14th. All stations reported air and ground frost during the month. The number of days with ground frost ranged from 8 days at Sherkin Island, Co Cork to 28 days at Markree, Co Sligo. The number of days with air frost ranged from 2 days at Malin Head, Co Donegal to 14 days at Mount Dillon, Co Roscommon. Eleven stations had an ice day (where the maximum temperature in a day does not rise above 0.0 °C) on Monday 12th, four of those stations had a second consecutive ice day on Tuesday 13th and one station, Ballyhaise, Co Cavan, had a third consecutive ice day on Wednesday 14th. Ballyhaise also had the coldest daily maximum temperature at any synoptic station since December 2010 with a maximum of -3.1 °C on Monday 12th. 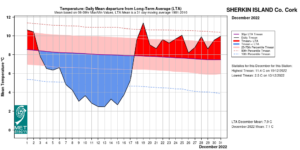 Sunshine: Sunny in most places

Monthly mean wind speeds ranged from 5.1 knots (9.5 km/h) at Mount Dillon, Co Roscommon to 15.6 knots (28.9 km/h) at Malin Head, Co Donegal. Gales were reported on 7 days during the month with up to strong gale winds reported on Wednesday 21st. The number of days with gales ranged from zero days at most stations to 5 days at Mace Head, Co Galway. The number of days with up to strong gales ranged from zero at most stations to 1 day at Mace Head, Co Galway. Both the month’s highest gust and 10-minute mean wind speed was reported on Wednesday 21st. The highest gust was 56 knots (104 km/h) reported at Belmullet, Co Mayo while the month’s highest 10-minute mean wind speed was 41 knots (76 km/h) at Mace Head, Co Galway.